Your faithful correspondent is writing to you from his stateroom on the Island Princess, in port at Ketchikan, soon to be en route to Juneau. On board internet access is expensive, slow, and metered. So my reports to you will be composed offline and uploaded intermittently.

Our story to date:

We had quite a long day on Wednesday, getting up at 4:00 a.m. to take the shuttle from the San Francisco Airport Marriott to the airport for our 7:00 flight. We flew San Francisco to Portland on an Alaska Airlines 737, and then Portland to Vancouver on a Horizon Air puddle jumper. We went through customs at Vancouver and took the charter bus to the port at Canada Place. There we went though customs again, putting us back in U.S. jurisdiction. Must be among the shortest international trips on record, but one made by a lot of people. We then went through security again before 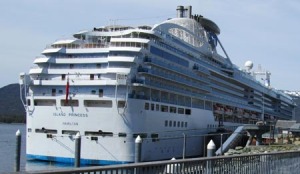 boarding the ship. The Princes security people in Vancouver could provide the TSA folks some lessons in friendliness!

After boarding we got lunch in the buffet, took a nap given our early morning, and went up to one of the upper decks and enjoyed the Vancouver skyline as the ship got ready to set sail. We went down to dinner at our assigned early seating and met our table mates. I certainly wouldn't want to characterize them, by any means, but if I were to do so, which I wouldn't, I would use the word "boorish." Fortunately we were able to switch to Anytime Dining.

Thursday was a relaxing day at sea, where we slept in, caught our breath, and watched our shoulders lower. Thursday afternoon we attended a wine tasting at which we discovered that the dining room staff are also entertainers. Thursday dinner was at the Bayou Cafe & Steakhouse, one of the two premium restaurants on board. Marvelous. More on that below.

Today at Ketchikan was an interesting experience. A town very much a part of Alaska's history is today all about tourism. Lots of shops selling everything from souvenirs to necessities one might have forgotten to expensive jewelry. Three ships in port all at once! But then the town has always been about commerce. It's just that it used to be about logging and salmon fishing. Only the nature of the commerce has changed.

That's it for now. Next report whenever it happens.