Karl Klaus, in The Made-Up Self, frequently mentions the naturalist and author, Loren Eiseley. Eiseley wrote a number of books in which he conveyed the awe and wonder of the natural world, the most well-known being The Immense Journey.

Back in my B. Dalton days in the mid-to-late 1970's I was an avid reader of Eiseley, and believe I read pretty much everything he had in print. In those pre-personal computer days I would copy down quotes from a book that spoke to me onto a piece of note paper and tape it to a sheet of eight-and-a-half by eleven paper, which I would then put in a three-ring binder. Other quotes I would copy directly to three-hole notebook paper. Many of those quotes are from Eiseley. I still have that binder today. Here's a randomly selected quote I found there:

It's odd, looking back and recognizing that.

impatience and getting past it

Back in the mid-1980's, when I was at the Unity church in Palo Alto the minister spoke about having a good friend who kept him focused. He tells the story about sitting in the car with him trying to get out of the parking lot at a restaurant, and his getting more and more impatient with the traffic. His friend said, "I've never seen two skeletons sitting in a car in a restaurant parking lot before."

My thing is lines at the store. Any store, be it grocery or otherwise. Being able to surf my Android phone has helped a lot, but I can still get annoyed when someone or something holds up the line. Thing is, I always get through the line. I'm sitting here at home writing this blog entry. I'm not still in line at the store.

the victory of marriage equality marriage in New York

There was great celebration among my Facebook friends last week when the New York state legislature approved marriage equality. It's so embarrassing that here in California we are still slogging through the Proposition 8 court battle.

Over at my Yahoo! pressure cooker recipes group, the list owner, who just turned 60, and who has been with his same-sex significant other for nearly thirty years, is ecstatic. They plan on a wedding in late July, shortly after the law goes into effect.

It's a delight to see so many people so happy and it is indeed cause to celebrate.

But work remains to be done, so let's continue to fight the good fight.

In the meantime, I commend to you Susan Russell's blog on marriage equality, and her reflections on how she has a life, not a gay life.

it’s been a year

I believe it was the last Sunday of June when I first visited St. John the Divine. It was the day of the annual church picnic. This year's picnic was yesterday. I knew from that first visit that I could be comfortable and happy here. I had some obligations I had to wrap up a Good Shepherd, but I visited when I could. I started attending regularly the last Sunday in August last year.

It was the right decision. St. John's is a great place to be. And I'm where I need to be: in the Episcopal church.

I have to share two versions of this with you. The first because I'm an absolute pushover for anything 1970's, and the second because that is how the song is really meant to be sung: by a full-size gospel choir.

On how many different levels can you interpret this? 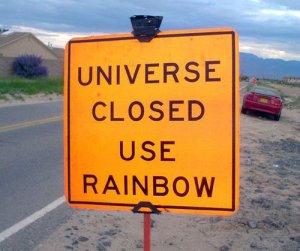 When I was growing up in Southern California and we fired up the coals and cooked hamburgers outside, we called that barbecue. As an adult, particularly in my Oklahoma years, barbecue was when you marinated the meat in a secret family or restaurant sauce and smoked it over low heat for several hours. What we did when I was a kid was called grilling.

Somehow that distinction still stands for me. Today we have a few barbecue places near us by terms of the second definition. When we cook burgers (meat or veggie) outside at home (now using propane) I call it grilling.

Interesting how our use of language changes.

If I were independently wealthy and didn't need to work, I'd be there actually reading the Kerouac novel.

Sunday was Trinity Sunday. We are now fully in the season after Epiphany. We had a late Ash Wednesday/Holy Week/Easter this year, and so a late Pentecost, meaning the stretch of ordinary time from now until the first Sunday of Advent will be shorter this year than it has been the past couple. But here we are. And that’s OK.

As much as I love the festival portion of the liturgical year, I really love the green season as well. Nothing special. Nothing out of the ordinary. Just the Word and the Meal in its most straightforward form. (Of course there are those unpleasant readings that we get the last few weeks in the season after Pentecost. But that’s another matter. And a ways off.)

For now I’m going to enjoy the sacred ordinary of ordinary time.

I had such fun posting the videos of "Hail Thee Festival Day" and "Lift Every Voice" after Easter, that I thought I would try a "Sacred Music Friday" for a while.

Today: "Oh God Beyond All Praising." Tune is from Gustav Holst's "Jupiter" in The Planets.