John Rutter's arrangement of "For the Beauty of the Earth," performed by the Saint Paul Cathedral Choir.

dealing with the crucible

My new job is stressful. Within my organization I have multiple constituencies which have differing agendas and want different and often conflicting things. I must also deal cross-organizationally with a another group of people who have a different agenda and wants. I co-own the strategy and roadmap with a woman in the other organization who bites the heads off of nails for breakfast. It is, as my predecessor in the position told me, a crucible.

Which means I need to keep up with my exercise to deal with the stress. I love it when the weather is temperate enough for me to walk outside, rather than do the treadmill inside. I have found a cool tool to help 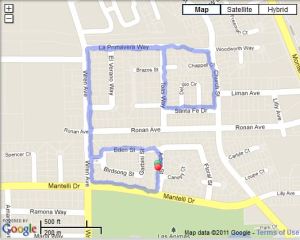 motivate me. It's the CardioTrainer for my Android phone.

The CardioTrainer maps my walk using GPS, records my distance, minimum speed, maximum speed, elevation change and a few other things too. A man with a very pleasant British accent gives me updates every three minutes. I love it. At the end of the work day, I put on my iPod, start my workout, and get out there.

Really helps me deal with the crucible.

the ambiguity of language

I haven't groused about language usage for a while, so it's time to do so again.

That's it. Enough grousing for now.

Kindle on the TouchPad

mely disappointed to find that the Amazon Kindle app was just a placeholder. There was no
app there.

You may have seen my brief mention that the app appeared in my TouchPad download manager on  Monday 18 July. I was delighted beyond anything that was probably rational.

Officially it is still in beta, but it is nonetheless quite nifty and very usable. Based on the comments made to online stories  announcing its arrival, it is, apparently, very similar to the iPad Kindle. I love that the book covers appear in color. Presumably drawings and diagrams will be much sharper than on the actual Kindle device.

By default the controls don't display, but all you have to do to get them to show up is to tap at the  bottom of the screen in the center.

At this stage in the beta process, not all of the features of the physical Kindle are there. You can't look up the definition of a word. And although I can create notes and highlights, I can't figure out how to access them for use elsewhere. As in this blog, for example. In my 2nd generation Kindle device there is a file called MyClippings.txt which I can copy to my PC when the Kindle is connected to it. My 2nd gen Kindle also lets me share a passage on Facebook, a feature that is not yet on the TouchPad. I hope that  will be added by the time we get to the full production version.

Overall, however, I am very pleased with my TouchPad Kindle app, and I know it will only get better by the time it exits the beta phase. Both my old 2nd gen Kindle and Angry Birds on my TouchPad are, I am afraid, going to experience some serious neglect.

Terry and I promised ourselves more ocean time this year. On Sunday we took ourselves up on that pledge. I skipped church and we drove over to Capitola. We planned to wander around the village of Capitola before heading

to New Brighton State Beach. However, there was a run happening that day of which we were not aware, and with the main village parking lot having lost a third of its capacity anyway, parking was miserable. (The police department has set up quarters there in portable buildings, due to last spring's flood that damaged a number of buildings, including City Hall.)

So we headed straight to the beach. Parking was easy, and though there were plenty of people there, the beach wasn't overly crowded. A little bit of walking took us away from the worst of the crowd. Actually we did a lot of walking, all the way down to Seacliff State Beach. That's 2.49 miles according to  my Android CardioTrainer app. (More on the CardioTrainer later this week.)

A good day. A great getaway.

Susan Russell posted this on Facebook. She put quotes around it, but didn't provide attribution. In any case, I like it. I think it speaks to feelings that many of us have.

Those fears often come up when we have doubt. So this quote from Fran ties in very nicely.

I think we can replace "an artist living an artist's life" with "a human being living a human being's life."

We all have doubts at times, and what we need to remember is that we are not betraying our faith. We are not being untrue to God. God doesn't get mad at us when we doubt. God knows that doubt is part of the human condition. And God's love does not falter when we doubt.

Thank you to Susan Russell for this, as well as for her words, which I couldn't have said any better:

"For preachers thinking seeds and sowers this week; for activists sowing seeds of justice and pulling out weeds of bias and bigotry; for everyone working to make the Garden of Eden grow green again."

a preview, I hope

I wrote a while back about how much I enjoy the magazine Books & Culture. As I wrote at the time, even though the magazine is published by the publishers of Christianity Today, Books & Culture "takes a balanced and even nearly academic approach. It is not by any means a bastion of liberalism, but the essays are intelligent, balanced, and well thought out."

I did have a couple of logistical problems with B&C. First, about one issue in three never showed up. Second, as much as I enjoyed the articles and reviews, the magazine is oversize and difficult to hold in my hands and read. I think the second point may be related to the first. Such odd-sized publications often don't make it through the postal system particularly well.

I solved both problems last week. I cancelled my print subscription and subscribed to the Web edition. And you know what? When I read the articles on my new HP TouchPad, I can increase the page size so the type is nice and crisp and clear, and I don't see the ads.

That is, I hope, a preview of what my experience will be with the Kindle for TouchPad, which is due out in, I am told, in a couple of weeks. Those predictions, I sincerely hope, are accurate.

UPDATE: I wrote this on Sunday. On Monday evening, minding my own business, my TouchPad notified me that the Kindle app was available. I of course downloaded it immediately. YES! It is there. It looks great! I am delighted. Hope to have a review for you next week. Angry Birds, you are going to have to take a back seat.

when reality peers over the wall

I've enjoyed my time so far at St. John the Divine. Part of that enjoyment comes from simply attending Sunday service without being privy to the inner workings of the church. I had chosen to assume that the church was on solid financial footing because they had a preschool to help support the infrastructure. Now, given the years I spent on the church council at Good Shepherd, I knew perfectly well that that was not a rational assumption.

So I was not surprised when the vestry member representing stewardship announced a few weeks ago that the church needed people to step up to help meet the summer shortfall. Then, in last week's church newsletter, Fr. Phil wrote, "Thank you to those who have been responding to our summer financial slump. We still have a substantial way to go to meet our summer obligation."

Then, just to ensure that I be reassured that St. John the Divine was a real church with real people and real issues faced by every church, he wrote about how he felt a sense of "false guilt" about the money spent on his tenth anniversary celebration this past spring, about "a sense of extravagance in a year when things would be tight plus with the insistence that I take time off, it would require supply clergy expense as well."

So there is an opportunity to read between the lines! The use of the noun rather than the verb form of "insist," allowing him to avoid stating who was doing the insisting. I can only assume that would be the vestry. That's interesting to me, because in the eight years I was on the church council at Good Shepherd (five of them as president, so I bear more than my share of responsibility), the council never insisted that Pastor Koch do anything. I think Good Shepherd might be a healthier church today if it (if we!) had. And I think that that is probably a testament to the health of St. John's, or at least an indicator that the vestry is taking an active role in the management of the church, which, except in extreme and occasional dysfunctional cases, is almost always a good thing.

So reality at St. John the Divine has peered its head over the wall at me. I knew that day would come eventually. And that's OK. I'm still happy to be there.