Found in my brother’s front yard. Got such a good laugh out of this! (Photo courtesy of Terry) 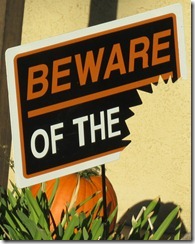 mad at (not about) Verizon

I wrote about my not-quite Android phone behaving badly. The behavior got worse, to where I was getting error messages constantly, starting with when I turned the phone on. It got frustrating enough that I ventured back to my local Verizon store to ask for help. Seems they’ve gotten rid of their technical staff and all they have is sales people now. The guy there was absolutely no help. He said my phone was out of warranty and I wasn’t due for a new phone until November 25th. Implied but not said, “Sorry. Too bad.”

I did some checking online and found out that what I was experiencing was not uncommon. The best suggestion I could find was to do a factory reset. That looked to me like the most extreme of options, but I couldn’t find a better solution. I tried it. As expected, everything got wiped out except for my phone number. Fortunately, much of my data was backed up somewhere on the cloud, but I had to reinstall all of my apps and rebuild my phonebook. The error messages went away, though.

Needless to say, I’m not pleased with Verizon. I considered ditching my phone now and getting an iPhone from AT&T. But that, I quickly realized, would be, as my dad used to say, cutting off my nose to spite my face. I’d have to pay the early termination fee with Verizon and would end up with a carrier with worse coverage than Verizon.

They’ve got us by the short hairs (forgive me) and they know it. The best I can do is bide my time and be patient until November 25, when I’ll be online ordering my iPhone.

I really have gotten past the point where I feel I have to have my camera in my hand every moment when we’re out and about on vacation. At Cambria last week, Monday afternoon and all of Tuesday were gray and overcast. I left my camera in the drawer and was content to enjoy the experience of being by the ocean and walking the Cambria boardwalk with Terry. Wednesday cleared up and I took my camera. I got some good pictures, I think, but I didn’t feel the urge to get every conceivable shot.

That makes for a more enjoyable, relaxing time away, I do believe.

My brother loves to give me a hard time. He’s the younger one, and I think it’s just genetic.

When we were down visiting him, my sister-in-law and my dad, I pulled out my not-so-smart almost Android phone to take a quick look at Facebook updates and he immediately began to harass me. He said that he had promised that he would not give be a bad time this trip (my sister-in-law agreed that he had so pledged), but my action put an end to that promise. He then gave me a verbal hand slap every time I reached for my phone after that.

My brother is not a technophobe, but he rarely uses email outside of work and his cell phone is strictly for voice communication. He said that his belief was why use email or text messaging when you could talk. Which would be fine, except that he often does not return my phone calls, and when he does he tends to leave a voicemail on my cell phone, even though I keep trying to explain that my cell phone isn’t on unless I am out and about. If I’m home, it’s off.

But that’s my brother. I suspect that if I had never pulled out my cell phone he would have found another reason to abandon his pledge not to give me a hard time. But I really can’t blame him. It’s got to be genetic.

the experience vs. the description

I have written a fair amount (some of you might say obsessively) about the art of non-fiction in general and autobiography in particular, and how works published under that rubric do not necessarily reflect events as they actually occurred. Sometimes this is deliberate on the part of the author. Other times there is not any kind of written record to which to refer and the author must rely on memory.

My current reading includes Driving Home: An American Journey by Jonathan Raban. Raban writes about how his travelling self will take notes, but that returning home his writer self will discard many of those notes and wonder why he didn’t more carefully document other things he saw and heard.

…journalists—wedded to the notepad, the tape recorder, the “verified quote,” the querulous gnome in the fact-checking department—may curl their lips in scorn at my habit of trusting the contents of my head more than I trust the documentary evidence of the notebooks. To them I’d offer this remark, made by the Barbizon school painter Jean-François Millet: “One man may paint a picture from a careful drawing made on the spot, and another may paint the same scene from memory, from a brief but strong impression; and the last may succeed better in giving the character, the physiognomy of the place, though all the details may be inexact.”

Yet another facet of the non-fiction prism which reminds me that the exact verisimilitude of what we read in such works cannot be relied on.

But people who live in glass houses shouldn’t throw stones, and I need to remind myself that I do the same thing. Perhaps not to the extent of John Steinbeck who, in the Log from the Sea of Cortez, wrote his wife out of the journey when she was in fact there every minute, cooking meals for the three men. But it is only a matter of degree.

Last week I dispatched some notes from Cambria. I mentioned an intestinal upset to which I devoted very little space in relation to the total blog post. In fact that intestinal nastiness informed our trip to a far greater degree than the note might have suggested, to the point that we had to forego dinner at our favorite Cambria restaurant, always the centerpiece of our visit, and considered coming home early. In this case, however, I didn’t want my personal ailment to distract you, good reader, from the picture of the place I wanted to paint.

I once pledged that everything I told you would be true, but warned that I wouldn’t tell you everything. That is still my philosophy.

I can’t think of a better way to do this.

We always love coming to Cambria.

blog note: Terry and I are taking off on vacation. We’ll spend a couple of days in Southern California with my Dad and brother & sister-in-law, and then head up to one of our favorite places on the California coast, Cambria. I will not be publishing on my regular blog schedule, but if a thought strikes me I’ll post something. Given that I’m paying more attention to writing than photography these days, and the fact that Terry will be taking advantage of the relatively flat boardwalk at Cambria to continue to train for the 3-Day, giving me some time to myself, you may well hear from me. In any case, we’ll return to our regular schedule with Sacred Music Friday on 21 October.

how not to win back customers

The other Sunday I was getting ready for church. I had just gotten out of the shower and the phone rang. “This can’t be good,” I thought, it being 9:15 on a Sunday morning. I dashed over to the phone as Terry was still asleep. I assumed it had to be either my dad or Terry’s sister. I looked at the caller ID display and it read “DIRECTV.”

You’ve got to be kidding me! You’ll recall that we dropped DirecTV in favor of cable some months back, not because we were unhappy with the television service we were receiving, but because our DSL Internet was excruciatingly slow and we decided to switch to cable for the faster speed, knowing that the only way to get a reasonable rate was to get the TV service as well. DirecTV has been trying to get us back ever since.

I picked up the cordless handset, pressed the On button, and without waiting for the agent on the other end to say anything, very nearly shouted, “It’s nine o’clock on a Sunday morning for God’s sake!” I then immediately pressed the Off button.

If DirecTV had any hope of getting us back as customers that about took care of it.