O Magnum Mysterium, Morten Lauridsen, Kings College. It’s really a piece for Christmas Midnight Mass, but take a moment out of this long season of green and enjoy it.

I recently wrote about how I saw Miss Manners as a Buddhist, given her propensity for advising people to get past their egos. She has another great quality too: non-judgment. Miss Manners does not make value judgments on people’s lifestyles. She simply advises on the proper social protocol given the situation.

Someone recently asked her how to go about inviting people in a polyamorous relationship to a gathering. Miss Manners replies that “etiquette does not attempt to pinpoint what goes on in a household when company is not expected,” and then simply spells out the proper way to address the envelope containing the invitation.

I do love Miss Manners.

This video from Minnesota Catholics for Marriage Equality is marvelous. It performs the dual role of speaking out against the Catholic church’s position on homosexuality and objecting to the Minnesota ballot proposition that would ban same-sex marriage. Bravo!

Thanks to Jim Naughton at Episcopal Cafe for this. 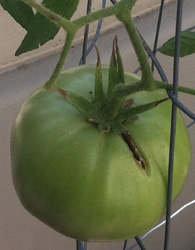 Terry does a marvelous job in the garden. We have spinach, green onions, peppers, and herbs. Tomatoes, though, have been a struggle.

We have had good tomato years, but that has not been the case recently. Here it is late September and we have had one tomato from a garden that includes two tomato plants. It never turned from green to red. Last year was much the same. Though I think we may have had two tomatoes, neither of which turned red.

I’m not sure what the problem is, but I miss my homegrown tomatoes.

I was talking to my spiritual director about beating myself up when a memory arose about something I’d done years ago. She reminded me, “It’s done.” So move on.

Then, within a day, my friend (and teacher) Jane Redmont posted this from the New Zealand Prayer Book, which I love anyway.

That is so perfect. The only caveat for me is that doesn’t let me off the hook for doing the undone things I’m able to do the next day.

Nonetheless, it’s an important lesson for me to let go of things done.

Sacred Music Friday: Psalm 46 – God is our Hope and Strength

From the Anglican church in Wrea Green, a village in West Lancashire between Blackpool and Kirkham.

My favorite of the Eucharistic prayers is Eucharistic Prayer C. That’s the one that says:

At your command all things came to be: the vast expanse of
interstellar space, galaxies, suns, the planets in their courses,
and this fragile earth, our island home.

In talking to my spiritual director last week she pointed me to another passage of this payer. It was the passage that says:

I wish we used Prayer C more often at St. John’s, because my spiritual director is right. It’s something I need to remember.

The Great Courses series I currently have on my iPod is Writing Creative Nonfiction. One of the points that the instructor, Tilar J. Mazzeo, spends a lot of time discussing, almost to the point of distraction, is what she calls the nonfiction contract. This simply means that if you portray something as nonfiction, the work, all of it, needs to represent the truth.

Mazzeo does not seem to acknowledge the degree to which writers violate this contract every day, though she does spend some time on one of the most egregious violations, the book A Million Little Pieces, published in 2003 as a memoir, which turned out to be strictly fiction.

Usually the cases are more subtle, as I discussed 2008. Here’s what I said then.

Shortly after I graduated from college, I read Looking Back by Joyce Maynard. Maynard is exactly my age and graduated from high school in 1971 as I did. I thoroughly enjoyed the book as her reflections on life and society very much resonated with mine. Maynard, you will recall, lived with J.D. Salinger for a while when she was nineteen. She chronicles this relationship, as well as her high school years in At Home in the World, published in 1998. She describes how what she wrote in Looking Back and her other writing of the time reflected what she thought her publishers and readers wanted, and not what she really felt and believed at all.

Several years ago I read John Steinbeck‘s book The Log from the Sea of Cortez, in which he chronicles an expedition through the Gulf of California he took with his friend of Cannery Row fame, Ed Ricketts. I seem to recall Steinbeck recounting his wife waving goodbye on the dock as they left Monterey. In any case she is not on the trip as recounted in the book. In 2002 Andromeda Romano-Lax published Searching for Steinbeck’s Sea of Cortez. She recounts the trip she and her family took re-tracing Steinbeck’s voyage and provides some background to the original trip. She mentions that Steinbeck’s marriage was heading into difficult times around the time of the adventure, and that not only was his wife on the Western Flyer with Steinbeck, Ricketts, and the crew, but she did almost all of the meal preparation. But Steinbeck chose to write her out of the book.

Dorothy Day, founder of the Catholic Worker Movement, wrote in The Long Loneliness of a solo pilgrimage she took to various places in Europe that held meaning for her. The only problem was this was actually a honeymoon trip, according to Paul Elie, in The Life You Save May Be Your Own. But then Elie’s book documents many discrepancies between Day’s life and writing, as well as that of Thomas Merton. (Flannery O’Connor and Walker Percy, the other two subjects of the book, don’t escape criticism, but since they wrote mostly fiction the discrepancies are not there to highlight.)

Wendy Merrill, author of Falling Into Manholes, which is classified as biography, told Sedge Thomson in an interview on West Coast Live that to avoid potential legal problems she not only changed names, but circumstances and events as well, and sometimes combined multiple individuals into one.

Sometimes a novel is said to be a “thinly disguised” autobiography, but I’m realizing that we may want to recognize that the “non” in “non-fiction” may not be as accurate or true as we generally want to believe. Maybe we need to appreciate some of our books at face value, and not expect all of our autobiographies and memoirs to be “true” in the strictest sense of the word.

I don’t think anything has changed since 2008. Earlier this year the writer John D’Agata aired his own dirty laundry in a book that described his dispute with a fact checker. D’Agata had no issues with altering facts for the sake of art, literary rhythm or flow. His fact checker felt otherwise.

As for this blog, my contract with you, dear reader, remains unchanged. Everything I say about my life is true, but I will not say everything about my life.

I wrote about not having an office on site at work any longer and becoming a full-time teleworker. One of the downsides was that my spiritual director was only ten minutes from my office. Getting to see her now was going to be a whole lot more difficult. Here’s what I said in my email to her about how much harder it would be to get to see her.

And logistics now appear to be a headache. Last time I drove in it was an hour and twenty-five minutes. No accidents – just people back to school and work. And I know [Highway] 101 to Sunnyvale will be worse. Then Google Maps tells me that it’s a half hour from Moffett Towers to your office (as opposed to ten minutes before). After that it’s 30 minutes back or an hour home. And I have to get lunch in there.

I was not seeing how this would work. Then I thought, well, we each have an iPad 2. There’s FaceTime. I asked her if she would be willing to give it a try. She was. We met via FaceTime last week and it worked remarkably well. I’ll try to make it into her office every once in a while, but at least now I know that I’ll be able to meet with my spiritual director on a regular basis, even if it is a virtual meeting.

That makes me feel good.

shifting around the high tech tools

I have a very nice notebook computer that has been badly neglected since I got my iPad. Meanwhile, there’s my kitchen mini notebook, which also has been neglected, despite the 500+ recipes it contains. I pulled out the kitchen mini the other day and realized that one reason it wasn’t getting used was probably due to the tiny screen. So, I thought, why not put the notebook in the kitchen and the mini on eBay?

I moved my recipe database to the notebook and was amazed at the difference. I think it will get a lot more use now. And the notebook in its new role will not be single-use like the mini. It will continue to be the computer for photos when we travel, and fill in in some other ways as well.

I think it’s a good shifting of resources.