Classic Joni, classic Cavett. Joni’s manager told her to skip Woodstock so she’d be fresh for this appearance. Thank you, Fran, for sharing this definitive performance!

The Particle at the End of the Universe

The Particle at the End of the Universe: How the Hunt for the Higgs Boson Leads Us  to the Edge of a New World
by Sean Carroll
Penguin Group
Amazon paperback price $14.50, Kindle $12.74

If you enjoy books on science written for a general audience, this one is likely worth your time. Carroll writes in clear accessible prose with a touch of humor.

He describes how the Large Hadron Collider was built, how it works, and what it does. He discusses other colliders and accelerators, including SLAC up the road from me and the recently retired one at Fermilab in the Midwest. He also discusses why the Superconducting Super Collider was never built.

He spends a lot of time on the Higgs Boson, and talks about how we will never see it directly because its life is too short, but how rather we must look for the components into which it decays. He also explains why the Higgs is important:

Without the Higgs, there wouldn’t be atoms, there would just be a bunch of particles zooming separately through the universe.

I guess that’s kind of important.

If you’re a book lover you know what a remainder is. It’s a hardcover book where the publisher has ordered too many copies, and there are still a bunch left over when the book stops selling or comes out in paperback. They are purchased by third party companies that specialize in such books and sold to the public at a fraction of their cover price. 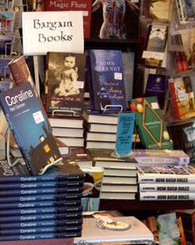 I’ve always loved remainders. In my B. Dalton days I was always buying them. More recently here in Gilroy I’ve never been much impressed by the selection at our local Barnes and Noble, but there’s always the mail order houses. My favorite is Daedalus Books, which specializes in more serious and specialty non-fiction and more literary fiction. It’s fun to place an order and get five or six hardcovers for the price of maybe two at list price.

I now read books in Kindle format, and in the e-book world there is no real concept of remainder. There are various forms of discounting of many titles, but it’s not quite the same. I love reading books on the Kindle app on my iPad, but I’ll always have a special appreciation for remainders.

I spent many years trying to get my personal periodontal house in order. Having done so I have worked hard to maintain that equilibrium. I was very unhappy, then, when the maker of the proxa brush I have long used was purchased

by a multinational. First they pulled the handle-and-refill system I have used so successfully off store shelves and from drugstore.com. I had to order online directly from them. Then a few months ago they discontinued the product altogether. I was seriously ticked off. It’s not like there is a wide variety of manufacturers for this kind of thing. I tried a few different products that the company had sent me — at least they were kind enough to send free samples. I settled on a small, re-usable brush with an angled handle. It seemed to work well, but I wouldn’t know for sure, of course, until I saw my dental hygienist.

I saw her for my usual visit last week. She said I was doing a really great job of maintaining things. She didn’t even ask me about my routine, which she has almost always done. My dentist said the same thing. They only asked to confirm that I was using an electric toothbrush, which, of course, I am.

I didn’t even get to complain about my long-time product being discontinued and having to find something new. The new product is obviously working better than I had expected, and, it seems, also better than my old trusted product.

on (not) capturing reality

On my birthday weekend, Terry and I visited the San Jose Museum of Art to see the Annie Leibovitz exhibit. One of the other exhibits, however, caught my attention. It was photographs of the American West by Doug Hall. It was

dominated by a big-screen video of the Golden Gate Bridge and the ship traffic going beneath it, and he had some amazing portraits, but what really caught my attention were two images: one of crowds of people at Glacier Point in Yosemite and the other of crowds of people at Mt. Rushmore. I have never been to Mt. Rushmore, but Terry and I have been to Yosemite several times, and on our most recent visit we took the tour to Glacier Point. My photos there removed the crowds to the degree possible. Cropping in Photoshop helped complete the task. I spend a lot less time and energy on photography now than I once did, but that has always been my approach: capture the beauty, remove the crowds.

It struck me, looking at Hall’s photos, that in my photography I have violated the very principles of capturing reality I have criticized nonfiction writers for violating. Yet had I captured the scene as I actually experienced it, the photo would be less pleasing and less aesthetically enjoyable.

This is making my head hurt.

The Concordia Choir, Our Father by Alexander Gretchaninoff, conducted by René Clausen

I was disappointed in this book. I heard the author interviewed on Science Friday and was interested in his work in tracking and cataloging birds. Indeed, I did enjoy those parts of the book.

The problem is that was not enough of the book. I got tired of reading about his interactions with his wacko once and not-really-future girlfriend, and his risk-filled antics in high school.

I did enjoy his reminisces of his college and post-college days, however. This passage hit a little too close to home.

In addition to the students and faculty, Bloomington supported a huge colony of people who never moved on— whose ambitions after graduation were no match for the town’s coffee shops, ethnic clothing boutiques, assorted Thai restaurants, and live music . So they hung around in underpaid or part-time jobs (standing behind the counter at a secondhand bookstore springs to mind) and they made every line at every bar in town that much longer.

Given my Claremont cockroach days and my tenure at B. Dalton, I did relate. I do recall those days with the best of memories.

just one of the girls

I’m very much a heterosexual. On the Kinsey scale I’m somewhere between a 0 and 1. There have been times in my past when there were no females in the circles in which I travelled who happened to be both available and interested, but at those same times there have often been men who fit that description. In fact, I have been hit on by men more than once. But that’s not me. We were never interested in going there.

At the same time I have always had a strong feminine aspect. (Presumably one relates to the other.) When I was a freshman at Pitzer College we were in those days asked to take the Minnesota Multiphasic Personality Inventory (MMPI), and on the male-female scale my score came back somewhat skewed on the female side.

Back in the early 1990’s I was working at a small six (or so) person software company. We were having a small get-together at the house of the president, Ed. I was there with Ed’s wife Nancy and the Amy, fiancée of our marketing director Bruce. We were waiting for Ed and Bruce, who were running late. Nancy said, “Well, where are the men?” She then looked at me and said, “Oh, I am so sorry.” I responded, “Don’t worry about it. I’m just one of the girls.” But Nancy would not be consoled.

Due to a scheduling conflict some months back I went to our hairstylist on a weekday rather than on a Saturday, when men are more likely to be in the shop. Our stylist, Debbie, told Terry that I was not bothered by all the estrogen in the shop. Apparently some guys are.

That’s always who I’ve been.

I used to listen to audio books a lot. Mostly I would listen on my iPod while I was out doing my walking. I have to say that I have great respect for the readers of audio books. Not everyone can do it, and not everyone gets to do it. There is a small corps of readers who are known and respected who get most of the gigs. You have to be good, and you have to be able to read the text of the book without flinching, no matter how uncomfortable the subject matter. It’s a skill not everyone has.

If you’re an author for the most part you’re not likely to be allowed to read your own book. If you have the skills to carry it off and if you’re well-known in your field, then maybe. David Sedaris records his own books, but he is as comfortable behind the microphone as he is at the keyboard. Most authors have to hope that the producer of the audio book selects the right reader.

A few years ago I gave up audio books in favor of lectures from The Great Courses. I prefer the conversational style of the lectures and the thirty minute format fits perfectly with my walking time.

Still, I admire the skill of the reader of the audio book.

Quest for the Living God: Mapping Frontiers in the Theology of God
by Elizabeth A. Johnson
248 pages
Bloomsbury Academic
Amazon paperback price: $16.44, Kindle: $15.62

I read this some months back. While much of the book is theology and somewhat dense, Johnson has some marvelous points about how God is ultimately unknowable and can only be accessed in image and metaphor. She says:

All fruitful metaphors have sufficiently complex grids of meaning at the literal level to allow for extension of thought beyond immediate linkages. That is why God can be seen as a king, rock, mother, savior, gardener, lover, father, liberator, midwife, judge, helper, friend, mother bear, fresh water, fire, thunder, and so on.

If human beings were capable of expressing the fullness of God in one straight-as-an-arrow name, the proliferation of names, images, and concepts observable throughout the history of religions would make no sense at all. But there is no one such name. Rather, in jubilation and praise, lamentation and mourning, thanksgiving and petition, crying out and the final falling into silence, human beings name God with a symphony of  notes.

I find this very helpful.