I’ve said that Cambria doesn’t change a lot. One innovation there, however, is the Cambria Scarecrow Festival each October. It’s a recent occurrence, having started in 2009. Terry and I first discovered it in 2011 when we were in Cambria in October.

The festival has expanded greatly in the past two years. This year there are more scarecrows, and a few have migrated up Highway One to San Simeon. They are more sophisticated. One family of scarecrows is actually in motion, riding bicycles. Many of the faces are more completely drawn, replacing the zombie-esque appearance a lot of them had in 2011.

Here is a more-or-less random sampling of 2013  scarecrows, courtesy of Terry. 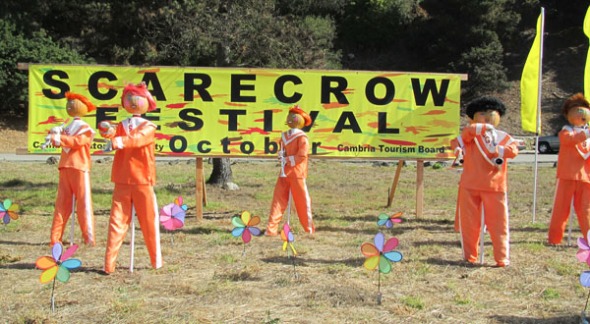 Not sure who the figure in the left represents. Neptune on the right, in front of the White Water Inn.