book publishing: not what it was

One thing that I share in common with many readers of my blog is the love of books. Many of you know that I worked for B. Dalton Bookseller from 1975 to 1982. I opened the store in Laredo, TX and managed two different stores in Oklahoma City. I made a brief return in 1986-1987 at a Silicon Valley location. I have been an active reader of books both before and since.

One of the things that was great about the publishing industry in the United States in the first three-quarters of the twentieth century of the twentieth century was the diversity of publishing houses. Economic reality has changed all that, and consolidation in the industry has greatly reduced the number of separate houses. I did an informal survey, and the results are sobering and rather sad.

Random house had always been the 800 pound gorilla in the industry, and that is still pretty much the case. It is now owned by the German conglomerate Bertelsmann, and includes once-time rival Doubleday, as well as Dial/Dell/Delacorte (which I believe Doubleday had previously acquired), Crown Books and its imprints (Clarkson Potter, Harmony, Broadway Books), the Jewish-focused house Schocken Books, and the once-independent Ten Speed Press.

No doubt you saw that the Random House owner Bertelsmann and Pearson, owner of Penguin, agreed to a merger of the two houses in 2012. That transaction closed on 1 July 2013.

Lots of other consolidation as well.

Some of these consolidations have been in place for a decade or more, but it’s only recently that I have taken the time to pause and survey the landscape.

Publishers are changing with the times in order to survive. Today I read my books almost exclusively on my iPad Kindle app. But as publishers adapt to electronic delivery, and we readers continue to support them, even if we are buying eBooks rather than paper books, I am confident that the industry will survive.

This was the year for doing things differently during the holidays for Terry and me.

After Thanksgiving I wrote about how a comment on NPR to the effect of “cranberry sauce is easy” motivated me to make my own after many decades of Ocean Spray, going back to my youngest childhood days. The recipe from Giada was superb. I did the same recipe for Christmas with full confidence.

Speaking of confidence, I wrote last week that Terry and I decided to change our Christmas tradition this year by cooking prime rib. We were both a bit nervous as we hade never made prime rib before, and it’s not something that you want to mess up. I printed out three somewhat variant procedures I found online. I had advice based on years of experience from my friend the Boston Pobble. And we had the flyer printed by our local Rocca’s Market.

When I ordered the prime rib, Mike, our seafood guy at Rocca’s, took my order. For two people he suggested a single rib, so I followed that advice and that’s what I ordered. When I picked up our single rib I was helped by Tom, co-owner of Rocca’s and the guy who runs the meat department. He was a bit concerned because out cut was so small, but gave me some suggestions.

In the end, we let our oven’s probe make the final call, and left it in until it reached the desired temperature. We pulled our prime rib out of the oven, put in a standard meat thermometer, and let it rest for twenty minutes. We had rubbed the meat with a locally made spice rub from Rocca’s.

The result, in a word, was spectacular.

Add rolls made from scratch, home cooked mashed potatoes, and green beans with bacon (another innovation, this one on Terry’s part).

It was a meal that made us stop and think about how much we have to be grateful for. It also reminded us of what the two of us can pull off when we each do our bit.

And our endeavor showed us that change and updating traditions can be a Good Thing. 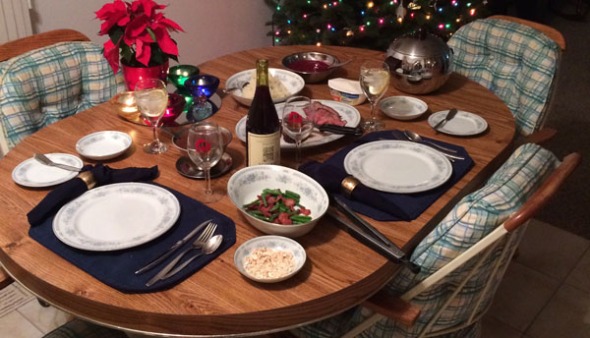 I’ve loved this Neil Diamond rendition of the John Lennon classic since the first time his Christmas special was broadcast.

I know that this song is about Hanukkah, and I know that Hanukkah was unusually early this year. But it seems appropriate on this day as we move from the Solstice, the shortest day of the year, to Christmas Day yesterday, as the days start getting longer and we celebrated (and continue to celebrate — Christmas is twelve days) the arrival of the Light.

Besides, it’s simply one of my favorites, and that’s reason enough to share it.

something different for Christmas

For the last I-don’t-know-how-many years, Terry and I have done turkey for both Thanksgiving and Christmas. For a few years we ordered a turkey breast from Whole Paycheck, but that was something of a pain because we had to head up into the Greater San Jose area, and any Whole Foods is by definition in a high-traffic congested area. Last year we discovered Rocca’s Market and ordered both our Thanksgiving and Christmas turkeys there. This year we got our Thanksgiving turkey at Rocca’s, but for Christmas we decided we were in a rut. After discussing it, we decided to do prime rib for Christmas, and placed our Rocca’s order for that.

Terry has been known to order prime rib when we dine out, but neither of us has ever fixed it before. I’ve been sorting through a variety of variant instructions for cooking it, trying to figure out which one will work the best.

It will be an adventure. Suggestions welcome from those of you who have experience with this cut.

This is a substantial work, as you can tell from the page count. It is also fascinating and readable. Strausbaugh traces the history of Greenwich Village from its days as a rural village in pre-revolutionary New Amsterdam to the present day. He covers how the Village developed and changed from those first days through the American Revolution, the Civil War, two world wars, the Great Depression, the Beat era, the Sixties and on to the start of the twenty-first century.

Most everyone who had a touch of the rebel in them spent time in Greenwich Village. He talks about Edgar Allan Poe and Walt Whitman in the nineteenth century. He quotes extensively from Malcolm Cowley in the first part of the twentieth century. He describes W.H. Auden’s years in New York City in the World War II era (and before and after), and provided some tidbits about Auden’s horrid housekeeping habits not included in an entire book devoted to the subject. (I mean a book devoted to Auden’s years in the United States, not to his housekeeping habits.) He explains the relationship Allen Ginsberg and Jack Kerouac had to the Village, and describes the rise of the Village Voice, and how it became a national publication, no longer focused on that specific location.

There were surprises. Jean Shepherd was a radio broadcaster in Greenwich Village long before hosting the mawkish (to my mind) PBS series Jean Shepherd’s America in the 1970’s. Shel Silverstein wrote the Johnny Cash song “A Boy Named Sue” based on Shepherd’s stories of the teasing he received as a boy with that name.

Strausbaugh makes clear that Greenwich Village was always a tourist spot, and that there were always entrepreneurs ready to exploit that.

A long book, but well worth the investment of time.

Terry and I have been visiting the marvelous Goose and Turrets bed and breakfast in Montara, California pretty much for as long as we’ve been together, which goes back to 1991. I’ve been staying there since 1986, which goes back to my first marriage. That means I’ve been a guest from the first year or two that they’ve been open. The proprietors, Raymond and Emily, generously gave us two free nights there last year in recognition of my being their longest continuous visitor.

We always love going there, because, the wireless Internet access notwithstanding, it is a place of quiet, serenity, and calm. It’s a place to de-stress and recharge.

It’s also a place to get the best breakfast you can find anywhere. Breakfast is served promptly at nine. You have your choice of coffee or tea, which you specify at check-in. They also serve juice. Breakfast is four courses: fruit, grain, a main dish, and sorbet. How many places can you go where you get dessert for breakfast?

Terry and I were there the first week in December to celebrate her birthday. There was one other guest, a beautiful young woman from France named Elena whose family Raymond and Emily know. For breakfast on our second morning Raymond prepared Eggs Benedict as the main dish. Elena said that this was her first Eggs Benedict. It was mine as well.

Terry loves Eggs Benedict, but like Sam I Am of the famous Dr. Seuss book, I have always avoided eggs in any form other than scrambled. But being a good B&B guest, I was not about to disrespect Raymond’s efforts. I took a taste. The Hollandaise sauce was perfect, and the dish was superb, even though I have never been big on poached eggs. Like Sam, I came around in the end, and I am glad I did.

If you’re looking for a getaway, go visit Emily and Raymond. And tell them that Terry and Mike sent you.