Thanksgiving blessings to you and yours!

Even if you don’t know the word “mondegreen” you know what one is. It’s hearing words to a song incorrectly. Children are known for their mondegreens. There’s the story of the young boy who was asked who the most important figure in the Bible was. He responded “Round John Virgin.” When asked who Round John Virgin was, he responded that we sing about him every Christmas, “Round John Virgin, mother and child.”

I first heard the word on a segment of Soundcheck from WNYC a few years ago. Last week it was featured in a piece on the public radio program The World, which is better known for its coverage of ISIS, Ebola, and drug lords in Mexico.

Adults as much as children create mondegreens. The Soundcheck episode paid a great deal of attention to the mis-heard words of John Fogerty in “Bad Moon Rising:” “There’s a bathroom on the right.” Fogerty is said to have sung those words in concerts at times.

This is a topic I enjoy. Feel free to share your own mondegreens in the comments.

In Florence Gordon Brian Morton has done an effective job of speaking with a woman’s voice, just as Kurt Anderson did in True Believers a few years back. Unlike True Believers, which was written in the first person, Florence Gordon is written in the third person. Three of the four main characters are female, and Morton does a marvelous job of taking us inside their minds, as he does with the male character as well.

Florence Gordon of the title is an aging feminist in New York City who was right in the middle of the fray at the height of the women’s movement and is getting some of the recognition she deserves. She struggles with writing her memoir and with failing health. Her son Daniel is a straight-laced cop who ended up in Seattle. When Daniel was dating Janine she was amazed to learn who his mother was and honored to become Florence’s daughter-in-law. Their daughter Emily, of college age and at loose ends, has the greatest respect for her grandmother.

In spite of the book’s title, the other three characters get as much attention as Florence. They are all real people with their strengths and faults. The the book comes to an end with few of the loose ends tied up. I’ll leave that description to Maureen Corrigan, a far more adept reviewer of books than I am, from her review on the NPR program Fresh Air:

Florence Gordon is one of those extraordinary novels that clarifies its readers’ sense of things, rather than cozying up to our conventional pieties. Morton’s ending is straight out of a Chekov story: It’s up in the air and brave; a closing vision of a life in all its messy contradictions, just limping down the street.

One of the floor lamps in my office gave out last week. The threads that connected the pole to the base had completely deteriorated, and that was that. I retrieved a three-bulb floor lamp that

I had relegated to the second bedroom some years ago for reasons I no longer recall. The light bulbs in it were some old 60-watt incandescent 5-year bulbs that probably date back to our years in Mountain View. When I turned it on I immediately had a sinking feeling and remembered why I so much appreciate my full-spectrum light bulbs.

I don’t know whether I actually have diagnosable seasonal affective disorder, but I do know that I would become down and blue this time of year. A counselor I was seeing told me about full-

spectrum bulbs (I think the more common label these days is “daylight”), and I installed those in the dining area, in our bedroom, and in my loft office. Since then, I have had only the briefest moments of that down feeling in the winter.

I immediately replaced the old 60-watts with daylight compact fluorescent bulbs and all was once again well.

It was good to be reminded about how much that technology means to me. It is not something I want to take for granted.

Terry and I have been watching the morning news program on Channel 2, KTVU, in the Bay Area since the mid-1990’s. Before we moved in together my habit was to listen to NPR on the radio while Terry watched Good Morning America on ABC. When Terry moved up here I deferred to Terry, but somehow I found Joan Lunden annoying. When Joan used the phrase “wakeup call” one too many times I suggested to Terry that we watch the local Mornings on 2 instead. She agreed.

KTVU was long owned by Cox Television. It was one of the first stations to join the Fox network when it started up, and when Fox News came along it used some resources from that network. For example it would broadcast the Fox News Sunday morning interview program and would use the Fox feed for the State of the Union message. For the most part, however, Cox kept Fox News at arm’s length from their local news broadcasts. Reports from Washington on Mornings on 2 came from the Cox D.C. bureau.

This past summer, however, Cox and Fox announced a swap of stations that included KTVU. That swap is now complete and Fox Television Stations, Inc. is the owner of Channel 2. So far the changes have been small. National stories on Mornings on 2 are read by the local anchors rather than going to Washington. However, the other day I came in the house from running errands while Terry was watching the noon news on Channel 2. I heard a reporter sign off a report saying, “Fox News, Washington.”

If that’s a sign of things to come the newscasts on Channel 2 are going to get a lot less viewership from Terry and me.

I thought I was pretty familiar with the offerings available from The Great Courses, so I was surprised when an article in the New York Times Magazine made me aware of a course with which I was not acquainted: Big History. (If you click the link don’t freak out at the price. It will be on sale again at about 70% off the list price sooner or later. They cycle through all their courses with such pricing.)

The occasion of the NYT Magazine article was to discuss how Bill Gates had watched the course, met the instructor, David Christian, and proceeded to work with him to develop a high school curriculum based on the college-level course Christian had been teaching. I was intrigued enough to buy the audio version of the Great Courses program, which, probably not coincidentally, happened to be on sale at the time. The premise of the course is that most history courses cover only the period from the beginning of writing, or slightly before, to the present day, and that omits the greater part of the history of the universe. Big History teams with science to provide a much more expansive story of the universe.

Christian divides the history of the universe into eight “Thresholds:”

This means that our species Homo sapiens does not show up until lecture 21 of the 48 lecture course. But that is appropriate in the context of the material being covered.

The course has not been revised since it was initially published in 2008. For the most part it holds up well, but some of the material is dated. For example, Christian categorically states that humans never interbred with Neanderthals, something we now know from genetic evidence absolutely did happen (and that humans are probably stronger and healthier for it). Six years is an eternity in modern science.

Christian has some different views and perspectives that you probably have not heard before. Whether you listen to this course on your iPod while out walking (as I did) or whether you sit down in front of your TV or computer to watch the DVD version, Big History is time well spent. (Or will be once the course goes on sale again.)

This week things are not what they have been. It’s a return to the ordinary.

The week before last I had my colonoscopy. That takes time and mindshare until it’s over. My sister-in-law’s visit has come and gone. Last week I was on call for jury duty. I never had to go in, but I did have to check the Web page twice a day. I took advantage of Tuesday, a govermemnt, and hence a court holiday, to interview at a company that employs a long-ago former co-worker. Then, on Friday, I had my final meeting, by phone, with my coach at the outplacement firm. That benefit ended yesterday.

So the colonoscopy is history. My benefit with the outplacement firm has ended. Julie returned home a week ago yesterday. My long-ago former co-worker who holds they key to my possible employment at that company is on vacation until after Thanksgiving.

Here I am at loose ends. All I can do is to keep on keeping on and to keep the job search process moving forward.

And so I will.

It’s that time of year. This is nothing new. Costco had Christmas merchandise out before Halloween. Still, I was somewhat taken aback when a Facebook friend wrote the following at 7:51 p.m. on Sunday 9 November, two days before Veteran’s Day:

Christmas and other winter holidays have already started – Santa’s house is up at the mall, the Burbank holiday tree is up, but not lit, the lights have been installed on the main streets of Downtown Burbank but not lit – Costco has holiday presents. Have the holidays already started where you are?

Not the slightest cringe or suggestion that perhaps this was all just a tad early.

We’re just past Veteran’s Day. Thanksgiving is a week and a half away. Advent does not begin until 30 November. Yet I got an email last Thursday from SiriusXM about their holiday channels. Saturday I heard Christmas music in a shop near the outlet stores. After dropping off mail at the post office today I saw that the City of Gilroy had its Christmas tree up and decorated. Terry blew a fuse a week or so ago hearing Christmas music at Home Depot. 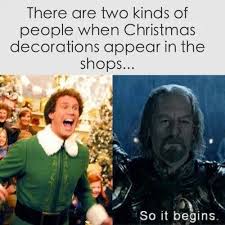