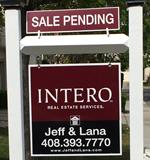 Some weeks back I posted a question on the Facebook group “I Grew Up in Hemet in the 60’s and 70’s” about whether we should go with Time-Warner Cable or Verizon Fios when we move to Hemet. I got a lot of great responses, and the consensus was almost, but not quite, unanimous in saying “Verizon Fios is great. Don’t even think about trying to deal with Time-Warner Cable.”

One grumpy person had to post, “Why would anyone want to move back to Hemet? Hemet is a great place to be from.”

If you’ve been reading this blog you’ll know exactly why we’re doing this, so I won’t repeat the details here. If you don’t know, click on Heading in a New Direction in the category map to the right and read bottom to top. Be warned, though, that you might get TMI — Too Much Information.

The thing is that you just don’t know what is going on in another person’s life.

I hadn’t spoken to the woman two doors down for literally years. She’s the one who runs a boarding house to pay the mortgage because her husband is an alcoholic and incapable of being responsible. I did speak to her briefly the other day. She told me that she lost her job three years ago (she had a good job in a pharmaceutical company), went back to school, and is now working taking care of the elderly.

The nice young family on the corner put their house on the market. They had bought a pair of Fords at just about the same time: an SUV and a Mustang. The Mustang has disappeared. As I was walking Tasha the other day I heard the husband tell someone, “We’ll probably move to Oregon.” Clearly there must have been a job loss of some kind and they are needing to improvise.

You just don’t know what is going on in another person’s life.

This quote has shown up on Facebook with some regularity:

Everyone you meet is fighting a battle you know nothing about.
Be kind. Always.

It’s true. I need to keep reminding myself of this.

Life has been disrupted from its usual routine for several weeks now, ever since we decided to sell the house and move south. My reading habits have been similarly disrupted.

Nonetheless, I recently finished two books on my iPad Kindle app that I was reading in parallel. The first was the Erica Jong 1973 classic, Fear of Flying. The second was Stephen Jay Gould’s final book of essays, I Have Landed. I was disappointed in both.

I loved Stephen Jay Gould’s columns in Natural History magazine in the late 1970’s, but his final collection, I Have Landed, written in the year before his untimely death after a second bout with cancer, was for the most part disappointing. A few essays here and there caught my attention. I enjoyed his exploration of Sir Arthur Conan Doyle and Sherlock Holmes. but for the most part I was not engaged.

Right now my Kindle app contains Short Stories by Jesus from the Biblical scholar Amy Jill Levine, and on the lighter side, Dick Cavett’s latest, Brief Encounters. I’m enjoying both.

We have three of those, in fact.

the effects of moving south

It’s easy to correlate a coincidence of timing with cause and effect. Buster Posey had his collision at home plate while we were on our Alaska cruise. Guess we shouldn’t have taken that cruise. I hate to think what might happen to the Giants when we move south.

The Raiders left Los Angeles and returned to Oakland shortly after Terry moved up to the Bay Area to join me. Now that Terry (and I) are planning to move back to Southern California the Raiders are talking about building a stadium in Los Angeles to share with the San Diego Chargers. Coincidence? You decide.

Ah, but here’s the reality. It was my late, greatly missed, Aunt Miriam who said, “Once you have lived in the shadow of Mt. San Jacinto you are bound to return.”

There you have it.

One of the dangers of having a smart TV is all of the services you can spend money on.

I decided to give Netflix another try after many years away. It was an easy decision since the first month is free and we can cancel at any time. I think I must have cancelled the Netflix DVD mail service in 2003, because I have a text file with my Netflix queue dated June 2003, and I remember saving the list when I cancelled. In those days streaming video was just starting out and smart TVs didn’t exist.

A whole lot has changed since then.

My first surprise was that my account still existed. I was able to log right in and I was prompted to rejoin and get a free month of streaming video. The only thing I had to change was the expiration number on my credit card. Netflix also remembered all of my preferences from 2003, which in a couple of categories is a tad embarrassing.

I’m impressed with the functionality. I started to stream a program on my new television just to try it out. When I installed the Netflix app on my iPad it was set up so I could pick up from where I left off. I love how you can add to your list or delete from it on your computer and have it show up on the TV. That’s great, since searching is such a pain from the television.

I’m sure anyone who has used the service is well aware of this, but I’ve discovered that the selection of movies and television programs available for streaming is smaller than what is available on DVD and Blu-ray, but still, it’s a pretty cool thing. 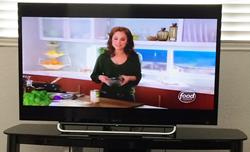 It didn’t take long for us to really get excited about our flat screen television. All those features that I sort of understood became obvious and clear. Both the TV and the Blu-ray player receive a WiFi signal so we can stream video from the services the device supports (Netflix, HuluPlus, etc.). I was disappointed that we can’t, as far as I can tell, add additional services (for example the basic, free Hulu. But it’s all about paying for services, and I’m sure that the services pay to be on the devices. I now understand what an HDMI port is, and I get that the TV has USB and Ethernet ports as well.

I was wondering whether it would be good to get a Google Chromecast device. I checked it out and discovered that it has pretty much the same services as our Blu-ray player, so no need.

I had thought originally that our installers had done a good job, but after a few days I realized that they were off base on a few points.

First they said that we only needed the TV remote for configuration. Not true. The set does not automatically flip back to the cable box when we turn off the Blu-ray. It did once when they were here, but not after that. We need the cable remote.

Third, they said Terry couldn’t have her wireless headphones because of the sound bar. Well, her headphones won’t work with the TV because it has no old-fashioned analog RCA audio out ports, only a digital audio port. But the cable box does have RCA audio out. I’m annoyed that it took me until Saturday to figure that out. But it’s fixed and Terry has her headphones back.

Then there’s Netflix. We have reconnected with Netflix after many years. More on that tomorrow.

The beautiful John Rutter arrangement of For the Beauty of the Earth performed by the Saint Paul Cathedral Choir.

we finally gave in

Terry and I finally gave in.

On Sunday while our real estate agent was working the open house we went to Best Buy and bought a flat screen television.

Since we haven’t shopped for televisions since the CRT days we had a lot to learn. We learned that all TVs are now LED, and that plasma is so yesterday. We learned that the differences are in screen size, the brightness and sharpness of the picture, and how smart the smart TV really is.

Oh, and sound. Flat screens have terrible sound. Which means buying a sound bar. At two-thirds the cost of the television. I suppose if you buy a set with a bigger screen and more features it’s a smaller percentage. But still. What’s with that?

It’s not like we really wanted to spend the money, but our TV was old, and when our cable box died after a storm and power outage, we were fortunate that the replacement cable box had an S-Video output, as there was no coax output. We have no expectation that our set-top box when we get Verizon Fios in Hemet will be compatible with our very old TV. We therefore thought it was a rather silly idea to lug that big, old cathode-ray tube unit with us. We know our new flat screen television will be happy with the HDMI connection in the equipment that the Fios service will certainly provide.

And you know what else? The left and right sides of the picture are no longer cut off. Wow! What a concept. 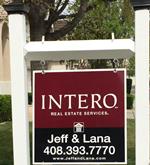 It’s been quite the couple of days.

Yesterday was fairly quiet with periodic updates by email on the offers from our realtor, Jeff. Towards the end of the day he let us know that he had four offers and would be here between 7:30 and 8:00 pm to go over them. At the last minute he sent us an email stating that he had another offer coming that would be to him by 6:30 and that he would be here by 8:15.

As it turns out he got here right at 8:15 and that fifth offer was bogus and a waste of time. But we spent time looking at the other four, and two in particular. Jeff called both agents, we discussed and countered. He left here at 9:30 with us believing we knew which offer we were going to accept.

I had an email from Jeff first thing this morning and we were on the phone at 8:30. There were responses from the two buyers, Terry and I talked when she got off her conference call and in the end our decision was the same. We called Jeff shortly after 9:00 am. He prepared the paperwork and emailed it to us. We reviewed the documents and signed electronically and had them back to Jeff by 10:50.

I spent the rest of the morning completing some necessary paperwork for escrow using the rather cumbersome Adobe Acrobat Fill and Sign function.

I was so tired I thought lunch out might be nice. Terry suggested our local South Asian place and we started to head out until we realized that we couldn’t. Our new flat-screen TV was to be delivered in the afternoon.

But that’s a story for tomorrow.