It’s been more than two years since I shared our household philosophy here, so I think it’s time to do so again. It has hung in the front entry way of all three of the houses Terry and I have shared. It comes from the long biographical essay “About Ed Ricketts” 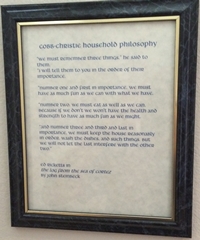 in the back of John Steinbeck’s book, The Log from the Sea of Cortez. Steinbeck and Ricketts were close friends and Steinbeck wrote the piece after Ed’s untimely death.

Ricketts was known for enjoying time with the ladies, and also for not taking responsibility for the consequences. Steinbeck writes that Ricketts, a scientist, came up with this logical, structured formula after three youngsters, for whose origins he apparently shared responsibility, were deposited on his front doorstep.

Terry and I have long felt that Ricketts’ formula reflects what we consider to be important in our daily lives.

“We must remember three things,” he said to them, “I will tell them to you in the order of their importance.
“Number one and first in importance, we must have as much fun as we can with what we have.
“Number two, we must eat as well as we can, because if we don’t we won’t have the health and strength to have as much fun as we might.
“And number three and third and last in importance, we must keep the house reasonably in order, wash the dishes, and such things. But we will not let the last interfere with the other two.”

This is every bit as true for us today as it was when we first hung it on our wall in Mountain View in the mid-1990s.

I know that playdates have been a real thing for quite a few years. After reading this Cul de Sac cartoon, I got curious and looked up “playdate” and “play date” on Google ngrams. The results were interesting. The word has been in use for a very long time. There were instances as early as 1940 if not before, though I only graphed 1960 on. But the word really didn’t get heavily used until after 1995. In many references from the 1960’s that I sampled, “playdate” refers to the dates a theatrical production was performed or film shown.

In terms of the current usage, however, I would guess that the practice, and hence the term, became more popular in a world where both parents were working and lives were busier for kids with organized activities such as soccer leagues. Those of you who know me know that it’s very easy for me to slip into “why when I wuz your age” mode. This is one of those times.

When I was growing up we’d go outside and see who else was outside and we’d play. Or maybe someone would even knock on a neighbor’s door and see if they were free to play. And we’d play. There were scheduled activities sometimes, but that was the exception rather than the rule.

It’s a different world. I know that. But I’d glad that I grew up in a time that we didn’t have to have scheduled playdates.

All The Wild That Remains: Edward Abbey, Wallace Stegner, and the American West

I stumbled across this book while looking for Kindle editions of Edward Abbey’s writings. I’m glad that I did.

This is a fascinating survey of the lives of Edward Abbey and Wallace Stegner, combined with a lot of depressing information about climate change and water issues in the West, mixed up with enjoyable accounts of the author’s travels and encounters in the region.

One thing Gessner does well is to contrast Stegner the academic with Abbey the outdoorsman and sometime monkeywrencher. He concludes that despite what you might guess based on those personas, Stegner was the more radical of the two in his views on the West and the environment. Others whose paths crossed those of the two men, and who also had a deep concern for the land and the environment get attention as well. Wendell Berry, Joseph Wood Krutch, and Bernard DeVoto all make appearances here.

Gessner wanders the West himself and does a marvelous job of describing both the landscape and the people he interviews, whose lives are inextricably intertwined with the fate of the West.

For those that know and love the West, this is worthwhile reading.

I started getting the New York Times Sunday Book Review by mail when I cancelled our home delivery of the Sunday Times. I did that when a former CEO of a former company I worked for cut everyone’s pay. It wasn’t so much to read the issue that came in the mail, as it was rather slow in showing up, but it was the cheapest way to get full online access to the Times.

For a long time I read the book review online, either on the Web or later on my iPad. When I started attending St. John the Divine in Morgan Hill I eventually began picking up the Sunday Times at the bookstore up there. So we had the full package, book review included.

When we moved here to Hemet the Sunday Los Angeles Times, supplemented by the Riverside Press-Enterprise, gave us plenty of Sunday paper. And I changed my philosophy on the book review. I thought the paper copy would be good Sunday evening reading. Yes, it is inconsistent as to when it shows up, and it often arrives three or more days after the cover date. But there’s really nothing time-sensitive there, and it represents a small subset of our previous full Times Sunday evening reading.

It works. A glass of wine and the Sunday Book Review with Terry nearby make for a pleasant Sunday evening.

why we keep coming back

While Pastor Kathleen was away on vacation, the priest filling in for her on the second Sunday reminded me of a basic truth. I wish I had a transcript or recording, but what she said in essence was this.

Why do we keep coming back here week after week after week? For the Bread and the Wine, because that is what allows us to go back out there and deal with the challenges of the world.

But sacred, really: Pete Seeger – Garden Song (Inch by Inch). I’ve shared this before, but it’s well worth the repeat.

Some weeks back I wrote about how disappointed I was with the online reference capabilities of the Hemet Public Library, especially when compared to the Santa Clara County Library System (SCCL). One of my regular readers suggested that maybe I could continue to use the SCCL online resources and send the occasional donation. That promoted me to go to the SCCL Web site, where I saw the post, “Starting July 1 2015, Santa Clara County Library District is offering free cards to everyone regardless of where they reside.”

How cool is that? So I can use the SCCL online resources without guilt. I love having full access to the Encyclopaedia Britannica Online and the full Oxford English Dictionary, not to mention a host of other resources.

Of course, sometimes Britannica is not sufficient. I heard mention one day about how an aspect of her personal life tainted, for some, the fictional work of Marion Zimmer Bradley. That aspect certainly seemed at odds with much of her writing, the speaker said. I remembered something about that, but I didn’t remember what it was. Britannica had nothing on this. Wikipedia tackled it head on: it was child abuse.

And Britannica is not always above reproach. Some earlier editions had articles by Thor Heyerdahl whose theories about South Pacific migration are generally discredited by mainline scholarship.

But I digress. I’m simply happy to have access to the SCCL and its wealth of reference material.

I’ve had good success with my new flat-bottom stove-top wok. Terry has enjoyed the result of what I’ve done and it’s a different style of cooking from what I’ve done recently. I’ve been using dark meat chicken, rather than breasts, which I long used almost exclusively. That’s a nice change in the flavor.

The packaging on my wok said that I should prepare all of the ingredients in advance and not try to prepare ingredients while cooking. That’s not just good advice, it is essential advice. The wok requires constant attention. I may leave the chicken alone to cook for a couple of minutes. That’s about enough time to clean the cutting board. Otherwise, everything needs to be chopped and ready. As one who tends to multitask when cooking, this is good discipline and good therapy for me.

The other thing the packaging said was to be aware of cooking times and add to ingredients appropriately. That’s obvious, I suppose, but it’s good to have it reinforced. I consciously think about cooking times, and add the ingredients that need the most cooking first.

One thing I’ve learned is that less is more. I’ve long had a habit of throwing too many vegetables into my stir fry, and we end up with wasted food. I’m learning that fewer ingredients are better. I’m learning to include the meat and then perhaps just three vegetables. That’s sufficient.

I love having added a new dimension to my cooking.

King Arthur: History and Legend
Professor Dorsey Armstrong Ph.D.
The Great Courses
Audio download $44.95 when on sale
If the course is not on sale, check back– the sale price will come around again

Listening to lectures from the Great Courses on my iPod is integral to my exercise routine, whether I’m walking, doing yard work, or on the treadmill. I almost always enjoy my courses, though I rarely review them here. Every once in a while, though, I listen to a course that I have to share. King Arthur: History and Legend is one of those.

I have listened to two other courses by Dorsey Armstrong, so I knew that I would enjoy her presentation style, and as her specialty is medieval literature I knew that she would know the subject matter. She is, in fact, editor of the academic journal Arthuriana.

The course does not disappoint. Dorsey starts with a discussion of the historical roots of Arthur, and how the legend is probably based on a tribal chief who led a group of clans in the fight against invaders after the Romans left the island of Britain in the fifth century. She takes the legend all the way through to the twenty-first century. Along the way she describes how the legend evolved. She explains that Lancelot was a fairly late addition by the French. She tells us how the stories were retold in German and even Scandinavian traditions. She discusses how the legend reached the height of its popularity in the medieval period after the publication of Malory’s Le Morte d’Arthur, and how interest waned until it picked up again with Tennyson’s The Idylls of the King in the nineteenth century.

If you are fascinated by the Arthur legend, you will love this course.