I have been privileged to stay in touch with Terry and Debbie, the children of my first wife Ruth, after her death in 1989. As it turns out, both are here in Southern California these days. Terry is in Los Angeles with his wife and children. Debbie is in San Diego and just got married. We were honored to be invited to the wedding. 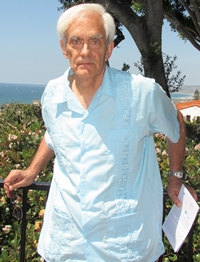 Yes, yes, I know. I never seem to be able to smile for the camera. If you can tell me how to fix that I’ll buy you dinner. Even if it means sending you a gift card for your favorite restaurant in your city.

The invitation said the dress was “garden party formal.” I wasn’t sure exactly that was. And that was one of those times when the gears in my mind did not mesh. Rather than googling it, I guessed. I thought that a guayabera, a formal business shirt used throughout South America, Cuba, and the Caribbean would be suitable. After all, I read, it was also known as a Cuban wedding shirt. So I ordered one from Amazon.

When we got there I saw that almost all of all the men were wearing ties and jackets. Had I simply done a search on “garden party formal,” as I did after the fact, I would have found what I should have worn, and discovered that I had everything I needed and that there was no reason to buy a new shirt.

All I could think about was the passage about the wedding garment in the parable of the wedding banquet, a passage found only in Matthew.

But when the king came in to see the guests, he noticed a man there who was not wearing a wedding robe, and he said to him, ‘Friend, how did you get in here without a wedding robe?’ And he was speechless. Then the king said to the attendants, ‘Bind him hand and foot, and throw him into the outer darkness, where there will be weeping and gnashing of teeth.

Fortunately, this was a Jewish wedding, so I suppose the tenets of New Testament parables didn’t apply. Lucky for me.

It was a marvelous wedding. The ceremony was heartfelt. Debbie was beautiful and very, very happy. Clearly she has found the right person.

Terry (my wife Terry) and I are delighted to have been there.

From the Big Sing at Royal Albert Hall, London.

This book is a clear, straightforward introduction to Anglican theology. I didn’t relate to the dancing metaphor Johnson used throughout the book, but I still found much of the book useful.

Johnson discusses how Anglican theology is not clear-cut and definitive:

Anglican theologies don’t easily lend themselves to intricate systems of thought. That’s one of the strengths of Anglican styles of Christian faith—they create a bit more room on the edges of traditional theology for creativity and even playfulness.

The primary reason I read this book, at the suggestion of my spiritual director, was to gain a better grasp of the Trinity. Johnson really didn’t help me here a whole lot. He suggests: “Anglican theologies create a healthy amount of space for experimenting with various ways to speak about God, each of which reflects the dynamic character of Divine Reality.” Yes, true. But at the same time we say the Nicene Creed every Sunday, and that has some pretty clear-cut doctrine about the Trinity.

Still, Johnson says: “While some members find traditional language about the Trinity comfortable and inspiring, others trip over it as outdated at best, or worse, a roadblock in their encounters with God.” That was reassuring.

Better yet, he goes on to say:

In my experience, I’ve known Episcopalians who are virtually unitarian in their theology but attend church faithfully…

That was worth the price of the book.

There’s a lot we love about our house. We love the fact that we don’t have stairs. Tasha never seemed to mind the stairs in Gilroy, but here in Hemet she can run tearing through the house at high speeds. Even more so since we have a great room. The great room is another thing that we love about the house. We’ve never had a great room before, and it makes for a nice, open feeling.

There’s a lot we love about our house.

Windows 10 (and a domain debacle update)

Last week, in the midst of my Web domain travails, and hence in a moment of insanity, I accepted Microsoft’s invitation to upgrade from Windows 7 to Windows 10.

It actually went relatively well. There were some annoyances, however.

Overall, however, I think that on my desktop computer Windows 10 does run faster. That’s a Good Thing.

For those of you who are interested, here’s an update on my csquared.com domain woes. 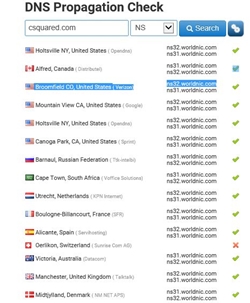 As I mentioned, I had planned to move everything to Google, both hosting and registration. When I called Network Solutions to get a transfer authorization code, the agent tried to talk me out of it, as is his job. I knew that there were at least two reasons to stay with Network Solutions. First, I would have a much broader range of services and capabilities there as opposed to Google. Second, and more important, when (if) I sell the domain, the transaction would be much easier from within Network Solutions than from within Google. The agent offered me a very good price for Web and email hosting for a year. So I agreed to the package.

So now all is well and working. Of course this is after I’ve moved all my accounts and contacts to my outlook.com email, but that’s fine. I think we’ll end up eventually selling the domain anyway.

I was talking to my spiritual director about this some months back.

After moving to Gilroy, I visited St. Stephen’s Gilroy and knew it wasn’t right for me. After commuting to Palo Alto on Sunday mornings for a year, when I realized that I couldn’t do that anymore, I visited St. Stephen’s in-the-Field in South San Jose. I sensed the spirituality of the environment at once, and while not really home, it was a good place to be for a year.

After my ten-year sojourn into the Lutheran Church, I visited St. John the Divine in Morgan Hill and knew it was a safe, comfortable place to be. When we moved to Hemet I immediately visited Good Shepherd Episcopal. I knew at once that I wanted this to be my spiritual home. The beauty of how the liturgy is done washed over me.

Each church is unique.

But really, sacred in its own way.

relics from the past

I  had a bunch of stuff from my previous lifetime stored in the garage in Gilroy. All of it made it down here to Hemet.

I had pictures of Terry and Debbie, who are the children of my first wife, Ruth, when they were young. I had Ruth’s certificates and diplomas. I had programs and yarmulkes from Terry’s bar mitzvah and a program from Debbie’s bat mitzvah. There was a challah loaf cover for Shabbat, Shabbat candle holders, and a Shabbat veil.  There was a Chanukah menorah and souvenirs from Israel.

As it happens both Terry and Debbie are here in Southern California. Debbie is in San Diego and Terry is in Los Angeles. We all met in a Google Hangout video conference and I showed them what I had. While Debbie was interested in what I had, she really had no attachment to it. Terry, on the other hand, was interested in acquiring all those relics from the past. I was happy to pack everything up and ship it all to him.

I hope he is finding those things useful in sharing with his family where he came from. 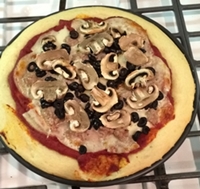 Early in the week I used my taco mold to bake corn tortillas into crispy taco shells. It worked great.

I ordered a new pizza pan to replace the one that somehow didn’t make it down here. On Friday I made homemade pizza from scratch. The oven did very well, and the crust came out crispy enough that I could hold the pizza in my hand to eat it. That’s my primary test of a good homemade pizza.

It’s a good oven. I have no reason to complain.

I’ve used woks and done stir fry off and on over the decades, with varying success. In the past stove-top woks needed those goofy adapters that were a pain to use. The electric ones generally had a non-stick surface that quickly became ucky, to use the technical

So it’s been a while. But here’s the thing with watching too many cooking shows: you learn things. 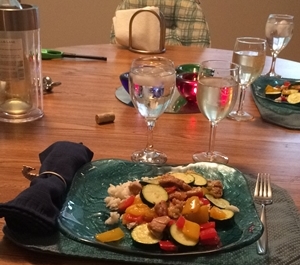 Made sense to me. Made sense to Terry. We have our local Bed Bath & Beyond and we have those ubiquitous 20% off coupons. So off we went.

We found what we were looking for, even if the label didn’t call it a wok, but simply “stir fry.”

We love it. I’ve used it twice so far. Once for an improvisational meal and one for Chinese-Burmese Chili Chicken, which Joyce demonstrated on the show. Both were great.

Our new flat-bottom wok is going to become a regular part of our cooking repertoire.