I was not expecting to be writing a second remembrance within the same month, but here I am doing exactly that.

Our holiday letter to my long-time friend Dennise was returned “Not deliverable as addressed — Unable to forward.” An email I sent to her did not bounce, but searches on Facebook and LinkedIn turned up nothing. I hesitated doing a Google search, because of what I feared the result would be. But I did do a Google search.

My fears were founded. In the top ten results were at least three obituaries. I didn’t try to count. Opening two of those obituaries confirmed it was the Dennise that I knew. (How many people with that name spell it with two n’s?)

It turns out that she died in November 2014. Now I know why I didn’t get her usual comprehensive and creatively-written holiday letter last year.

Dennise and I were hired as technical writers at about the same time but completely independently of each other in 1995 at a company called Verity, which no longer exists. We shared an office until we moved to new facilities where our cubes were right next to each other. As it turned out we shared many of the same values spiritually, and we stayed in touch, however intermittently, after I left Verity in 1997.

Dennise was, if you believe in such things, an old soul. She was at her core a pagan, and she joyously celebrated the Winter Solstice. But she loved the liturgy at Grace Cathedral in San Francisco and the values the institution stood for. She also loved the Christmas Eve Midnight Eucharist there. Meanwhile I was at the time moving from Religious Science to the Episcopal Church. We had many interesting conversations, both in person and via email.

I will miss Dennise. Let light perpetual shine upon her.

NPR has done it again. They have published their Book Concierge for 2105. This is the third year they have done this, and it is a very cool tool.

Along the left navigation they have a list of categories. Here is just a sampling:

You can select the categories in any combination you like, and the page displays the results. For example, you could select:

As I said, very cool. Check it out.

Whew! This was a slog.

The print edition of the The Fellowship is 657 pages, although the notes begin on page 512. And while the book is heavily annotated, there are no links to the notes in the Kindle edition, so accessing the references real time while reading on my iPad Kindle app was virtually impossible, and I didn’t try. Of course, even if you read the print edition you would have to keep one finger in the notes at the back to keep up.

While the Zaleskis have created a comprehensive reference work here, it was more detail than I needed. Still, there were some interesting bits. While it is widely known that Lewis lived much of his life with “Mrs. Moore,” the mother of his close friend who was killed in battle in World War I, it turns out there was, in fact, a Mr. Moore. Where he was or what he did is not explained, presumably because the Zaleskis were not able to unearth any information. Though it seems that both Lewis and Mrs. Moore complained regularly about Mr. Moore not doing whatever it was he was supposed to be doing. Then there was the fact that Lewis’s marriage to Joy Davidman, his love late in his life, was a pragmatic matter related to her illnesses.

Likewise, there is a lot of interesting information about the what it took for J.R.R. Tolkien to complete The Hobbit and the Lord of the Rings. The short answer: a lot. And although Lewis’s older brother Warnie’s name is not mentioned in the title, he was in fact an integral part of the Inklings group, which met regularly and shared their work with each other.

I think that I would have been better served reading the well-regarded The Inklings: C. S. Lewis, J. R. R. Tolkien and Their Friends, which, though out of print, is readily available as a used book from Amazon and no doubt other sources.

Still, I now know a few things that I didn’t when I began the book.

When we start the new liturgical year with Advent, I am always a couple of weeks behind in realizing that we are moving from one year to the next in the three-year lectionary cycle. It hit me just last week that we have finished Year B, the year of Mark, with its brevity and Jesus in conflict with the authorities, and we have now moved on to year C, the year of Luke.

I like Year C. I like Luke. Luke has little of the harshness of Matthew, and overflows with compassion. Jesus is always having a meal with someone, somewhere.

Luke contains the Song of Simeon and the passage in which he tells the criminal, “today you will be with me in Paradise.” Luke contains the Emmaus Road story, even if we don’t get it in our Year C lectionary readings.

Since we’re in the middle of Hanukkah. One of my very favorites.

This is one of those bits that showed up on Facebook. I think it makes the point well.

I have really been enjoying the Toastmasters group up the road in Menifee. I have only missed one meeting since I started attending. That was the week before Thanksgiving when I had a nasty, unpleasant intestinal upset. I was really disappointed to miss the meeting.

I have done two speeches so far, the second of which was last week. I got some really good feedback on it, but failed to win best speaker, as one of the old pros also spoke that day. What is nice is that the evaluator, while kind, does not hesitate to point out what I could do better. That is, after all, why I am there.

The meeting is not without its frustrations. One member, who has attended only a couple more meetings than I have, just doesn’t get it. I can, perhaps, forgive her first speech, where she was all over the map, though she could have read the instructions more carefully. What is frustrating is that she made the same mistake in her second speech, which was also last week. After all, I’m an old-time Silicon Valley guy and tech writer, so I’m very familiar with the abbreviation RTFM (read the f—-ng manual).

Nonetheless, it’s a great group, I’m learning a lot, and I enjoy it.

living in the shadow of the mountain

I grew up in the shadow of Mt. San Jacinto. The landmark is embedded in my essence. I am

delighted that here at our new home I can see the mountain from my front yard. Most of the rotating pictures you see in this blog’s header are taken from that spot (the downtown Hemet photo being a notable exception).

When we decided to buy a house in Hemet, it was not a given that I would have that view from my front yard. In fact, our street is on an incline, and as I walk down the street the montain disappears from view.

My Great Aunt Miriam’s quote of the old Indian saying is at the top of this blog: “Once you’ve lived in the shadow of Mt. San Jacinto you are bound to return.” She had a great

fondness for the mountain. When she and my Uncle Johnny returned to Hemet from Northern California she was delighted to show me the view of Mt. San Jacinto that she had from the window of her breakfast nook.

The mountain was sacred to the Cahuilla Indians, and I am grateful be living once again in its shadow. 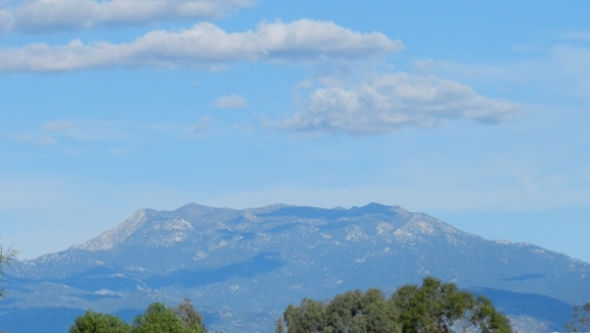 Yesterday was the second Sunday of Advent. A week ago we had prophecy (Jeremiah) in the lectionary readings, as my friend Tahoe Mom mentioned. We also had an apocalyptic reading for the Gospel, something that happens every year on the first Sunday of Advent, and something that, finally, I am getting used to.

This week we had prophecy again (Malachi), but we also heard the Song of Zechariah and got an introduction to John the Baptist. We move forward from one week to the next. Advent is a journey, as Tahoe Mom points out.

Tahoe Mom wrote about that journey last week, on the first Sunday of Advent. Her reflection touched me so much that I wanted to share part of it with you. But I commend to you the entire blog entry.

Spiritually we travel these next four weeks with no assurances that there will be a place to stay when we get to the end. And certainly no palaces or cool hotel suites await us ~ only a back yard stable and the pain of birth. Never the less, we make the journey, somehow confident that at the end, Light will arrive and if necessary, we will make the journey all over again. Crazy? Yes. Amazing? Yes as well. Blessings on our way.

Advent blessings to all of you who celebrate the season.

I usually avoid performances recorded with handheld cameras here on Sacred Music Friday, but the harmony is lovely, so I hope you’ll put up with the somewhat shaky video.