I recently passed the 1400 recipe mark in my Living Cookbook recipe database. That sounds crazy, perhaps. However, if Terry sees a recipe that she is interested in, or if I see a recipe that I am interested in, and I haven’t saved it we may or may not be able to find it later on.

I take this perspective. How many people who rely on the Joy of Cooking for their recipes have cooked more than a fraction of the recipes in the book? Now there was the blogger who wrote about her goal to cook her way through Julia Child’s Mastering the Art of French Cooking, who became the subject of the movie Julie and Julia. But she must certainly  be the eccentric exception. I doubt that many people have prepared more than a small percentage of recipes in that two-volume set.

The point is that we have a wide range of recipes to choose from, and when we are looking for something new to try, my database will almost certainly offer us an idea that we can act on.

So I’m going to just keep on going.

Beethoven, Symphony # 9, the fourth movement: Ode to Joy, the Chicago Symphony Orchestra, conducted by Riccardo Muti with lyrics in English. And by the way, the whole symphony is there if you are so inclined. Enjoy!

origins of the elements

I was never very good at chemistry. In addition, chemistry class my junior year in high school was not a lot of fun. The teacher was heading towards the end of his career, and, in my view at the time, experiencing a case of burnout. He used all of his sick days (or so it seemed) and as he was the head of A-V at the school, he was able to and often did show us films that had nothing to do with chemistry.

Nevertheless, I have always found the periodic table of the elements to be fascinating. I was pleased to see, courtesy of the good folks at Astronomy Picture of the Day, this non-traditional version of the periodic table which shows the origins of each element. 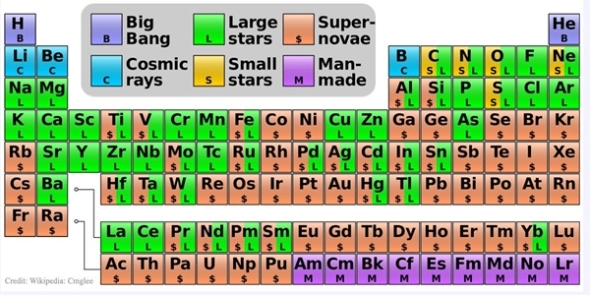 Way back in 2008 when John McCain selected his running mate those of us who a) followed (and still follow) politics, and b) whose political leanings were (and are) to the left of McCain’s were both 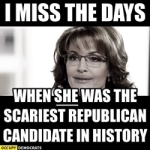 scratching our heads and somewhat alarmed. Yes, there was a bit of begrudging appreciation that he selected a woman, but, really, that woman? The inexperienced governor of Alaska who was virtually unable to put together a coherent sentence? She would be next in line for the presidency were McCain to have won?

Now, eight years later, the remaining five contenders for the top spot on the Republican ticket present an apparition even more frightening than the woman whom Tina Fey on Saturday Night Live spoofed as having said, “I can see Russia from my house.”

There is Trump, first and foremost. What is there say? To quote Terry’s response these days in such situations, “Rēally?” Ted Cruz, so it appears, doesn’t think individuals with celiac disease should be in the military, or if they are, based on his comments regarding gluten-free MRE rations, apparently they are not entitled to diets to keep them healthy. Marco Rubio in 2013 said that if his own immigration bill contained something that gave gay couples immigration rights he would have opposed it. Ben Carson said the pyramids in Egypt were used to store grain.

Crazy enough that I got a big laugh at the Tweet below that my friend Annalee reposted on Facebook. Whether it’s The West Wing, True Blood, or Star Trek: The Next Generation, it’s easy to relate. As I commented on Annalee’s repost, “I don’t have a better explanation.” 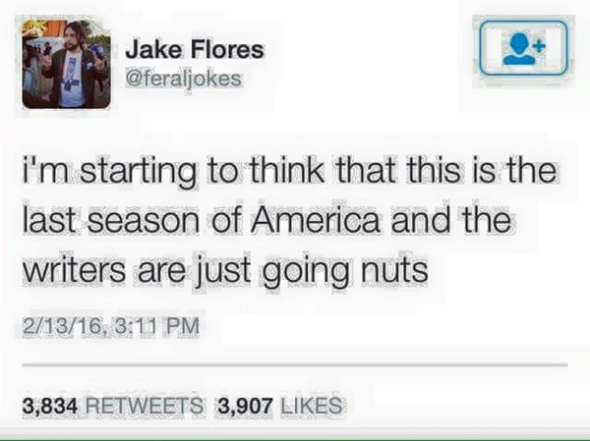 History of the English Language

History of the English Language
Dr. Seth Lerer, Ph.D.
The Great Courses
Audio download $49.95 when on sale
If the course is not on sale, check back – the sale price will come around again

History of the English Language is a fascinating survey of English. Lerer is an old-school lecturer, but he nonetheless presents his information in an engaging and interesting manner. Although Lerer does not divide up the course in this way, I see it as consisting of two parts. The first part, in my mind, consists of the first twenty-four lectures and covers English from its beginnings through the development of the Oxford English Dictionary. The second part, lectures twenty-five through thirty-six, describes English in the New World.

Lerer describes the reconstruction of the early Indo-European language in the nineteenth century, and provides and introduction to historical linguistics. He describes the characteristics of Old English and takes us one step at a time up through 2008 when the course was produced. He tells us that the conventions used in text messages are nothing new.

Along with a comprehensive history, Lerer gives us a lot on interesting tidbits. He tells us that John Milton’s teacher was highly critical of Chaucer, and thought Chaucer was doing a great deal of damage to the English language because of the number of foreign words he used in his writing. Lerer tells us that the translators of the King James Bible deliberately used what at the time were archaic constructions.

This course was a marvelous companion on my walks.

Terry and I had not thought much about chorizo until we saw soy chorizo mentioned in the Trader Joe’s Fearless Flyer. I found a recipe, we gave it a go, and we really loved the taste. I started collecting chorizo recipes.

Recently I was going through my recipe database, and I realized that there was no one place for my chorizo recipes. I decided that needed to be remedied. I created a new cookbook chapter for chorizo in my database and added a new chorizo (search) type for recipes that contained chorizo, but where the primary ingredient called for the recipe to be in another chapter, for example, chicken.

We had not had soy chorizo since moving here. There is not a Trader Joe’s nearby, but I figured that our local Sprouts market would have soy chorizo. I selected a recipe and went to Sprouts. I got the last package on that particular day. I made a chorizo and refried bean mix for soft tacos. Delicious!

Given the shape of the packaging and the taste of the soy chorizo from Sprouts, I suspect that it came from the same factory that manufactures the Trader Joe’s brand.

I’m happy to have soy chorizo back as part of our menu rotation.

Dodgers pitchers and catchers report tomorrow. I’m ready to once again follow the team of my childhood. I’m not happy that I most likely won’t be able to watch the games on television due to the greed of the current Dodger ownership group. Only those who have Time-Warner Cable or Charter Cable will see the games, barring a business miracle very soon. We have Verizon Fios. We could have gotten Time-Warner, but when we moved here we were warned to go nowhere near them.

It’s especially distressing given that this will be Vin Scully’s last year broadcasting Dodger games. Yes, we can hear him for the first three innings of home games on the radio, but fans deserve better.

I spent a number of years as a Giants fan. I warmed up to the Giants one year in the mid-1990’s when they were in contention and we were living in Mountain View. At our rental house there was plenty of yard work to do, and Hank Greenwald’s radio play-by-play was a great companion while trimming the hedge. Terry and I loved the television team of Duane Kuiper and Mike Krukow when they emerged, and we were delighted when Jon Miller took over the radio duties in 1997.

But we are no longer in the Bay Area and hearkening back there only causes me emotional distress. So the Dodgers it is.

Given the Dodgers television situation, however, we’ll leave plenty of bandwidth for the Los Angels Angeles of Anaheim as well. Besides, that’s Terry’s team. Their pitchers and catchers reported today.

And so the season begins. 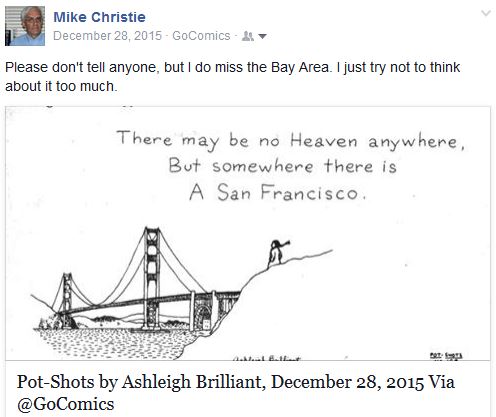 The folks at Current reminded me that the NPR news magazine All Things Considered made its debut on National Public Radio in 1971.

It was in the spring of 1971 that I graduated from high school, and in the fall of 1971 that I started college in Claremont, located on the eastern edge of Los Angeles county. Many of us there listened to classical music regularly. In addition to the commercial Los Angeles classical music radio station, KFAC, the noncommercial station KUSC broadcast classical music. KUSC also broadcast All Things Considered in those days. Today KFAC is long gone and KUSC is all classical. I don’t remember when I first started listening to ATC, but I know that I was very familiar with it by the start of my junior year, when I moved into the quiet suite in Mead Hall at Pitzer College. I remember discussing the program with my suite mates.

I still listen today. The show continues to provide quality reporting. I wrote last fall about avoiding news overdose, and that is still something I need to work on. I listen to NPR news shows more than I need to. Sometimes it is just good to switch to music.

But I’m glad that All Things Considered is there for me.

it’s best when you improvise (in the kitchen)

No, I do not like smooth jazz. Give me straight-ahead jazz, please. You can talk to Terry about smooth jazz if you like. But I do love that tag line from the show.

The same thing applies in the kitchen. Some of my best efforts have been the result of improvising. I particularly enjoy improvising when I’m working with ingredients we have on hand.

I figured I could work with that.

I cut the chicken breast into two pieces and seasoned it with the salt-free 33rd & Galena seasoning from my number one (and for the most part exclusive) spice monger, Penzeys. I cooked the chicken in the frying pan. I then turned off the heat, put a piece of provolone on each piece, and prosciutto on top of that. I put everything under the broiler.

Terry was delighted. I was happy with the result.

Another enjoyable result of improvisation.