My to-be-read book list is very straightforward and accessible: it is the samples in my Kindle iPad app. The

only problem is that I have so many of them. Nonetheless it’s convenient when I’m ready to start a new book. After I finish a book I give myself a few days and check out a some of the samples on my iPad. Ultimately I select a title and buy the Kindle edition.

I’ve made one change recently. I don’t try to read more that one book at a time. I find that when I try to read two books at once one gets short shrift and it takes me forever to finish.

My Kindle books, whatever my current habits, are an important part of each evening.

Jesus and His Jewish Influences

Jesus and His Jewish Influences
Jodi Magness, Ph.D.
The Great Courses
Audio download $44.95 when on sale
If the course is not on sale, check back – the sale price will come around again

This was a thoroughly enjoyable course. Jodi Magness is an engaging lecturer and the information she presents is fascinating. She discusses various aspects of Jewish history and religion and how they tie to Jesus. Some of the ties are somewhat tenuous while others are very direct, but the information is always fascinating. Magness starts in the period before the first temple was built and goes all the way to the early rabbinic period.

I learned a number of things I didn’t know before. For example, I learned why the people of Jesus’s region of Galilee were Jewish. The Hasmoneans, you will recall, wrested Judah and Jerusalem away from the Seleucids. They also did a fair amount of conquering of their own, including the area of Galilee. They forced conversion on the peoples they conquered, which is why the line of the various kings Herod was Jewish and why the common people, including Mary and Joseph, were as well.

I’ve often heard that the rabbis were the successors of the Pharisees after the destruction of the Second Temple in 70 AD. Magness insists, however, that not all rabbis followed in the Pharisaic tradition and not all Pharisees adopted the rabbinic approach.

Drawing from her own research, Magness provides some interesting theories about Jesus. Judaism, you will recall, was very interested in ritual purity. This was true both of mainstream Jews and of the various sects, such as the Essenes. She states that Jesus believed in ritual purity, citing the passage in which Jesus healed the leper and told him to go show himself to the priest. While the Essenes in one their documents, part of the Dead Sea Scrolls, list all the kinds of people who will not be allowed in the coming kingdom (essentially everyone who was not physically whole and without blemish), Jesus healed people, so Magness proposes, so they could participate in the Kingdom of  God. She points out that the aliments that Jesus healed (leprosy, hemorrhage, blindness, etc.) match pretty much exactly the list of the ailments that would exclude someone from the Essene version of the kingdom to come.

This is a great series. If this a topic that interests you, I can highly recommend it.

I have to admit that I had until now never made a vinaigrette dressing, as simple as that is. On a recent Sunday, however, we were having a light dinner of pre-made ravioli from our local Sprouts (mini-Whole Foods-style) grocery store. We decided to have a salad with some of

our container garden spinach along with mushrooms, so I decided to make a vinaigrette for the dressing. I had a recipe in my Living Cookbook database for a vinaigrette by Food Network chef Geoffrey Zakarian. It actually came from a recipe for roasted chicken with bibb lettuce, and called for adding juices from the chicken to the vinaigrette. Of course with no chicken I had no juices to add.

For the vinaigrette proper, Geoffrey listed the following ingredients:

I added all of the ingredients as listed (surprise!) except for the tarragon, which I forgot because the ravioli was done and I was trying to get dinner on the table.

It turned out well. Terry really liked it. I thought it was good too, but next time I will cut the mustard in half (and perhaps use dried regular mustard). I’ll also remember the tarragon, though it will be dried.

More experimenting to do.

a Rite I Easter

I don’t like getting out of bed early on a Sunday, but I did so yesterday. I knew that my normal 10:30 a.m. Rite II Eucharist at Good Shepherd Episcopal would be absolutely packed on Easter, and I knew that parking would be something of a headache. I also knew that I would be hard pressed to get back home in time for Easter brunch reservations with Terry and my dad at the lodge here.

So I got up early and attended the 8:00 a.m. Rite I service. At Good Shepherd the Rite I service has no organ, no choir, and no music. Easter is no exception. I had never attended a Rite I service before. We used a small portion of the Rite I liturgy on Ash Wednesday this year, but aside from that I have only experienced Rite II.

Rite I would not be my choice for worship on a weekly basis, but I am glad that I had the experience. Some of the Elizabethan language is quite soaring. This part of the Eucharistic prayer stood out for me:

[Remembering] his mighty resurrection and glorious ascension;
rendering unto thee most hearty thanks for the innumerable
benefits procured unto us by the same.

And although we are unworthy, through our manifold sins,
to offer unto thee any sacrifice, yet we beseech thee to accept
this our bounden duty and service, not weighing our merits,
but pardoning our offences, through Jesus Christ our Lord

It’s not a Malcolm Boyd style of prayer to be sure, but it is powerful in its context.

Next week I plan to be back at my usual Rite II 10:30 service with the choir, the magnificent pipe organ powered by our superb organist Jean, and the more contemporary language, but yesterday’s journey was one well worth having taken.

in observance of Good Friday

I’ve always thought that the serenity prayer as it is normally recited just a tad maudlin and simplistic. The original version was, it is generally but not universally agreed, written by Reinhold Niebuhr. I find it much more meaningful and powerful. You can see it here.

Another version has been around for a few years, but I only discovered it via Facebook in the last several weeks. It’s on the web site The Jesuit Post and it was written by James Martin, SJ. The original post was published 9 November 2012. I reproduce the whole prayer here with some trepidation, as the intellectual property belongs to the Jesuit Post and to Father Martin. But I do reproduce it because, well because I myself need to be reminded of these words.

I love the Malcolm Boyd style Father Martin uses in this prayer.

God, grant me the serenity
to accept the people I cannot change,
which is pretty much everyone,
since I’m clearly not you, God.
At least not the last time I checked.

And while you’re at it, God,
please give me the courage
to change what I need to change about myself,
which is frankly a lot, since, once again,
I’m not you, which means I’m not perfect.
It’s better for me to focus on changing myself
than to worry about changing other people,
who, as you’ll no doubt remember me saying,
I can’t change anyway.

Finally, give me the wisdom to just shut up
whenever I think that I’m clearly smarter
than everyone else in the room,
that no one knows what they’re talking about except me,
or that I alone have all the answers.

Basically, God,
grant me the wisdom
to remember that I’m
not you.

A New Serenity Prayer © The Jesuit Post, All Rights Reserved

Dark Matter and the Dinosaurs

I love Lisa Randall’s work. I very much enjoyed Knocking on Heaven’s Door, which told the story of the Large Hadron Collider. Dark Matter and the Dinosaurs was an equally engaging tale.

Randall discusses a lot of different, yet related, topics in this book. She tells us about dark matter, dark energy, the objects orbiting in the distant (and still theoretical, not yet directly observed) Oort cloud, impacts on earth by meteors and comets, and the extinction of the dinosaurs. There is a lot of material here and I won’t attempt to summarize it. I’ll simply say that she ties together dark matter and the dinosaurs by suggesting that there is a measurable periodicity to celestial objects hitting earth, that this periodicity may be influenced by a dark matter disk, and the extinction of the dinosaurs was likely caused by an object or objects hitting earth governed by that periodicity.

Randall draws heavily on her own research as well as that of others. She does a great job in discussing the rigors of the scientific method and her intent to maintain that discipline. I am impressed by her ability to be both an academic research scientist and a popularizer of science. And oh, she even shares a photo of herself in a non-speaking cameo role on the Big Bang Theory.

Wednesday is trash day. We have three containers: trash, recycling, and yard waste. We have a lot of foliage that needs to be pruned, trimmed, and cut so I generally make Tuesday my yard work day. It’s good exercise, and once I get started I tend to keep going. I will usually go through two or three thirty minute lectures from The Great Courses on my iPod. When I’m done I feel as if I have accomplished something.

In reality, I would rather be generating income, but short of that I really do feel as if I have accomplished something by the time I’ve finished my yard work, taken out the trash and recycling, and had my shower. It’s a good feeling. 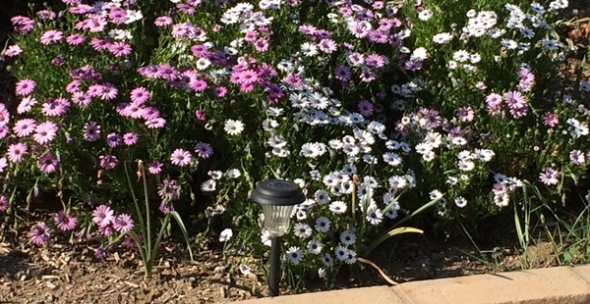 our berm in bloom

I am doing something different today. I am sharing with you a recreation of the speech I gave at Toastmasters last Thursday. Once I decided what I wanted to talk about, I realized what an emotional impact the subject had on me. I gave the speech everything I had, and was delighted to have won the best speaker award for it. It was my first.

I was not able to get the video cameras on my desktop or laptop computer to capture me standing up in any kind of way that worked. So remember that when I actually gave the speech I was standing up in front of a group, moving about the floor, and using more gestures than I use here.

Still, I was pleased with how well the speech went over and I thought it was worth recreating on video. I hope you enjoy it.

Social Justice Music Friday: Til it Happens to You

“Til it Happens to You” by Three Miles Lost, an all female a cappella group at Hobart and William Smith Colleges (HWS) singing for survivors of sexual assault. The group directs our attention to the web site http://itsonus.org/.