From the day I got my Competent Communicator Toastmasters manual, I began to work on making my way through the book, making speeches one through ten in order. I was delighted to have completed that process a couple of weeks ago.

What surprises me is the lackadaisical attitude of a few members. Our own Sargent-at-Arms has not completed his ten speeches, though he continues to give speeches on random topics entirely divorced from the manual. One woman has hopped around the book, doing speeches in no particular order.

Still, I feel good about my accomplishment and look forward to moving forward in the process.

I sort of am

My parish and a local synagogue are sharing in some services, so tonight I went to Shabbat service, my first time there. Best question of the evening: “Did your family get upset with you when you became Catholic? Did you do it because you got married?” Me: “No, I started out this way. I just seem Jewish because I sort of am.”
—my friend Fran on Facebook

I identify with Fran. I’m not Catholic. I was raised a Methodist and these days I am an Episcopalian. But I do identify.

I have been attracted to Judaism since I was in high school. In college I was happy to be surrounded by so many Jewish classmates. I dated and was very fond of a Jewish woman named Julia during my Claremont Cockroach days. Somehow I managed to not make that relationship work.

In Oklahoma City my first wife Ruth was Jewish. We were married by the Reform rabbi under a chuppah in you back yard. I considered converting. I found the Yom Kippur Kol Nidrei service to be deeply moving. I loved attending Friday evening Shabbat services, but the rabbi made some unkind comments about the New Age movement in a sermon, and seriously ticked off Ruth who was a big time New Ager. My attempts at “But what he was really saying was that…” fell on deaf ears. So that was the end of that.

One time I attended an interfaith panel sponsored by the Oklahoma City Islamic community. I was there to present the perspective of the Unitarian Church, to which I belonged at the time. When I arrived, the host came over to me, extended his hand, and said, “Rabbi Maharam?”

Even today I become somewhat wistful when Yom Kippur nears.

I would not consider converting today. I know where my roots are, and I am where I belong in the Episcopal Church. But, like Fran, I sort of am Jewish.

Sacred Music Friday: I was glad

The Abortion (or: are you kidding me?)

Those of you who are old enough to remember Richard Brautigan will recognize the first part of my title as a reference to his novella about an abortion in Mexico that did not go well. The second part of my title represents this way of thinking: WTF? Why the bleep are we still having to fight this battle?

Let me tell you a story. I’ve told this before, but it’s been some years.

I was living on Olive Street during my Claremont Cockroach days. Beth was my housemate. She was a sophomore at Scripps College. Her boyfriend Ken, who, in fact, arranged for her to help me share in the rent, came back to Claremont from his Ivy League medical school over Christmas. They did what lovers do, and the birth control failed.

Beth had a problem. She got some good advice and signed up for MediCal. Then she talked to the folks at the Planned Parenthood clinic and made an appointment for her abortion. I dropped her off at the clinic on my way to work at B. Dalton Bookseller and she had arranged for someone else to pick her up afterwards.

She had a lot of pain and Ken was a humongous jerk in grilling her over the phone as to how much of that pain was psychological. But she was free of the pregnancy.

Had Beth been required to bring that pregnancy to term her college career would have been ended and her entire future would have been in jeopardy. I don’t know where Beth is today, but I trust that she is successful and doing well.

Roe v. Wade is the law of the land. We cannot allow ourselves to backslide.

(You know the second half of that phrase.)

One of the things we love about being where we are is that we are in a gated community. There is a front gate with a guard and a side gate that is strictly automated. At the side gate there is a motorized retracting gate and a guard arm. We have had a periodic problem with the guard arm being taken out. This normally happens when someone tries to tailgate behind the car in front of them and not send up their own transponder signal. The guard arm comes crashing down on their car and detaches.

After the last guard arm take-out I guess the management company and the access committee got fed up. In our last association bill there was an insert (in our case a PDF attachment, since we get our bill via email) describing in detail how the transponder and contact fob work, and how to properly use them.

At the side gate they recently placed rubber pylons about a foot out from the curb. When someone (obviously not management company staff) placed the pylons on the curb, the number of pylons doubled and every other one was labeled with a sign saying, “Do not move. This is a beta test.”

I do not want to serve on the access committee. I do not envy what they have to deal with. They are conscientiously doing their job, however.

To quote the phrase we heard when we were young, “If you’re going to behave like children…”

And so it goes.

I achieved an important milestone in my Toastmasters experience last Thursday. I completed my speech #10, which means our Vice President for Education has submitted the paperwork for my Competent Communicator designation. Once confirmed I will be able to refer to myself as Michael Christie, CC — at least in the Toastmaster world.

I gave my first speech on 29 October, so the entire process took just under seven months. Not too bad in my estimation.

I was especially pleased that my speech # 10 won me the Best Speaker award for the day, as it was one I felt especially good about. It was about people helping other people. Such people represent, to quote the phrase George H.W. Bush once used, “a thousand points of light.”

wasn’t it yesterday when he was small?

I have known our nephew Race since he was an infant. He was born in September and Terry and I got (back) 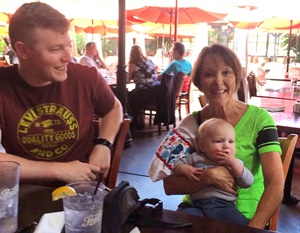 together the following March. That was 1991. I made frequent visits to Southern California to see Terry in Anaheim, and we would often go to her parents’ house in Ontario where Terry’s sister Julie lived with her son the young Race.

Terry moved up to the Bay Area with me, and Julie eventually found her own condo in San Diego and then a larger place in El Cajon. Race grew up and attended high school. I think the last time I saw Race was when he graduated from high school. At the ceremony we sat near his girlfriend Brigida, who is now his wife.

Race attended the Naval preparatory academy and then 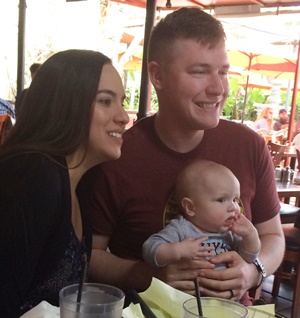 Annapolis. He struggled with academics and was half a grade point shy of being allowed to return for his senior year. He became an enlisted man and served on the USS Peleliu. When that ship was decommissioned he was transferred to the new aircraft carrier the USS Ronald Reagan, which was heading out to Japan.

In the midst of all of this he and Brigida got married, and Race Jr. arrived about ten months later. Terry flew down for the wedding. I stayed home as a matter of financial prudence, as I had been laid off by that time.

Now we’re here in Southern California and Race recently returned home. He had a botched hernia surgery at the 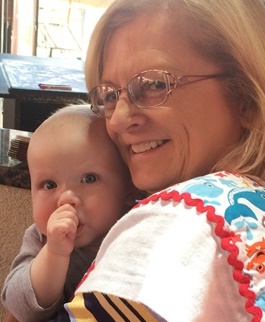 preparatory academy and has fought with a lot of pain ever since. So he’s on light duty as the Navy considers the path forward for him. But he is home with his wife and son, and that is a wonderful thing. Julie is pretty happy about that too.

Terry and I were delighted, therefore, when Julie invited us and her friend Doug to lunch in El Cajon with Race, Race Jr., and Brigida on Sunday. Race is amazingly mature and the two of them are great parents. Terry has seen Race Jr. before, but this was my first time seeing him.

We had a delightful time.

Back in 2014 I wrote about the mondegreen. A mondegreen is a misheard song lyric. It recently popped up as the OED (Oxford English Dictionary) Word of the Day, so I thought it would be fun to revisit it.

The word was coined by essayist Sylvia Wright in 1954. She admits to having misheard the words to a poem her mother read her. Her mother read:

She used the phrase in an article in Harper’s Magazine in 1954, where she said,

The point about what I shall hereafter call mondegreens, since no one else has thought up a word for them, is that they are better than the original.

This from the OED entry on the word.

The entry also quotes Stephen Pinker in 1994: “The interesting thing about mondegreens is that the mis-hearings are generally less plausible than the intended lyrics.”

I’m not sure that those two statements are contradictory. Take Wright’s original mondegreen. It is more interesting than the original in its symmetry, bit it is less plausible. The wife of an Earl is a Countess, not a Lady. Although the daughter of an Earl is a Lady, so had it been his daughter and not his wife that was slain in this mishearing, that would be correct.

A famous mondegreen from rock music is John Fogerty’s “There’s a bad moon on the rise” being heard as “There’s a bathroom on the right.” More interesting and less plausible.

One of my favorite songs from my Claremont cockroach days was England Dan & John Ford Coley’s “I’d Really Love To See You Tonight.” My mondegreen was hearing “I’m not talking ’bout movin’ in” as “I’m not talking ‘bout no wedding.” Hmmm. In that case I’d say equally interesting and equally plausible.

I’ve been thinking about doing this for quite some time, but I never got around to acting on it.

Then I saw a video for a recipe for our new NuWave oven in which the chef was using them and I decided that it was really time to do it. What she was doing was wearing disposable gloves while handling chicken. 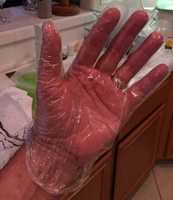 If it works it will be a big improvement.