It is, after all, Christmas until January 6th.

When it comes to kitchen gadgets and equipment I generally have two sources: Amazon and Bed Bath & Beyond. However, I have stumbled on a surprising new source.  It’s the regional grocery chain Winco.

When we decided to follow the instructions by the folks at The Kitchen on Food Network for preserving berries, we needed to get glass containers, and Winco had them.

I need to give them proper credit.

I recently watched a pair of episodes from Dick Cavett’s PBS series in 1981 in which he interviewed Jack Lemmon and Walter Matthau. It was a real delight.

When I was attending Pitzer College in Claremont I would come home to Hemet to see plays performed by the Hemet High theater class. They put on some good shows, and, as I recall there was no amplification. I remember a great performance of Stop the World I want to Get Off. The lack of amplification was also true for the Four College Players in Claremont and the Pomona College theater department.

Theater today is a much different animal. Terry and I have seen Phantom of the Opera in both San Francisco and San Jose. We saw the original Chorus Line on the San Francisco Peninsula and the wonderful revival in San Francisco. We saw Rent and Wicked in San Jose.

All of those shows relied on a complex array of wireless microphone. The theater community has been unhappy because the FCC has been considering changing the regulations around wireless microphones, and they say the changes would require heavier, more unwieldy microphones. I hope that doesn’t happen.

The bottom line is this: I admire Matthau’s integrity in 1981, but Terry and I loved all of the theater experiences I have mentioned.

Live theater is a mode of entertainment to be respected, enjoyed, and savored. Sound amplification does not diminish the experience.

I was looking for my next book to read, and I wanted to avoid spending any more money at Amazon for the time being, given that the bulk of our Christmas present dollars went to that fine firm. Therefore I visited the ebook section of the Santa Clara County Library System web site. To avoid the aggravation of seeing all be recent books I wanted to read being checked out I selected the “Currently Available” option. That is where I found this book.

I was familiar with A.O. Scott both in his role a movie critic for the New York Times and for his multiple stints as host on the late, lamented movie review television program At the Movies. It seemed worth a go, especially since the price was right.

The book is, to my mind, somewhat uneven. Some parts are so abstract as to be almost meaningless. On the other hand, I found his discussion of the ancient Greeks and their use of criticism engaging. Scott has an encyclopedic grasp of Western civilization, and his knowledge ranging from Renaissance art to nineteenth century literature is impressive.

Scott intersperses his commentary with a kind of Platonic dialog between himself and a sort of alter ego. I’m not sure that this adds a lot to the book, but at least this convention lets us know that Scott doesn’t take himself terribly seriously.

Is the book worth reading? I would say that there is a lot of nonfiction out there that is probably a better use of your time.

Once again NPR has produced something marvelous that offers great temptation to book lovers. The 2016 NPR Book Concierge is up and running on the NPR Books web site.

For the past few years the good folks at NPR Books have taken the books reviewed on NPR during the course of the year and applied filters to them. They list the filters on the left-hand side of the page while images of the book covers take up the rest of the page. You can mix and match filters to your heart’s content.

Here is just a handful of the many filters available:

So you could select, for example, Staff Picks + Book Club Ideas.

Or you could select: Biography and Memoir + Seriously Great Writing + Rather Short.

Or maybe: For History Lovers + Identity and Culture.

It’s a lot of fun and it could well keep you in books throughout 2017.

One note. In previous years the book concierge did not work well on mobile devices. This year, however, it works beautifully on my iPad Air 2 using Safari. There is one difference in the tablet version that I rather like. When I tap on the book using my iPad I see the complete summary. In my desktop Firefox browser when I hover my mouse over a book I only see the beginning of the summary and I need to click to see the whole thing. Of course if you have a different tablet or browser your mileage may vary.

Whatever device you use, if you got an Amazon gift card for Christmas you can blow through it pretty quickly here. 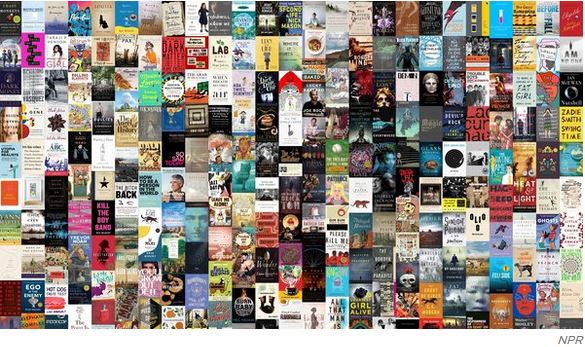 I don’t know why I never got a hand-held lemon squeezer. It’s something that’s practical, useful, and inexpensive.

If I need to squeeze a few lemons there is no point in hauling out the electric citrus juicer and have to clean all the parts afterwards. My method has been to hand squeeze a lemon into a measuring cup using a small strainer. That is really inefficient and messy. I believe that it was Guy Fieri on Food Network who pointed out that squeezing a lemon by hand meant that you were leaving juice in the lemon.

I’ve fixed that now. At less than $8 it was well worth it and way overdue.

When we were in Gilroy Terry and I stumbled upon a lovely diffuser. It has a base that holds a tea candle and the receptacle for the oil or wax is held up by three ceramic dolphins. When we lived in Gilroy it resided in my (late, lamented) loft office. So in the evenings when we were in the bedroom we could smell the scent but 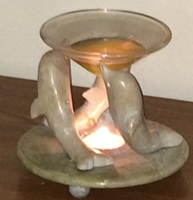 Here in Hemet, the diffuser never got unpacked. Recently, however, Terry was feeling a need for our firewood oil scent. She brought in her little, simple diffuser so we could experience that. At her request I unearthed  our dolphin diffuser and brought it into the bedroom. Now we can both smell the scent and see the candle flame at the base of the diffuser.

a slight tweak to our pantry inventory

As long as I have been cooking and buying groceries I have bought tomato paste in a can. This goes back to the mid 1970s in Claremont. The problem is that with the recipes I fix these days, when they call for tomato paste they generally only ask for a tablespoon or two. Then I end up with a partial can of tomato paste in the fridge.

I notice that the hosts on Food Network frequently use tomato paste in a tube. I have adopted that practice. It’s much more efficient, and it’s easier to get the tomato paste out of a tube than scraping it out of the bottom of the can.

It’s a good tweak to our pantry inventory.

on communication and observation

I appreciate my brother Brian and my sister-in-law Bobbie for a variety of reasons. One of those reasons is that both this year and last year, since we’ve been in Hemet, they came up with ideas for Christmas presents for Dad on which we could go in with them. This year it had to do with a tortoise. Bobbie and Brian said that Dad had always wanted a tortoise and that they had found one at a reasonable price, assuming that Terry and I split the cost. We were game.

Bobbie and Brian decided to give Dad the tortoise early as it was in their utility trailer and preventing access to the potted Christmas tree, which was also in the trailer. Brian felt that the tortoise was too heavy to move twice. So after breakfast on a recent Saturday we went over to Brian and Bobbie’s house to surprise Dad with his tortoise. He was delighted.

That same afternoon I was walking Tasha, and I noticed that our neighbors three doors down have a smaller sculptured metal tortoise in their front yard. Eighteen months here and I’d never noticed it. Sir Arthur Conan Doyle has Sherlock Holmes speak about the difference between seeing and observing.

In this case I’m guilty both of poor communication and not observing.

That stuff happens sometimes. It’s a learning process, even at my age.