Earlier this year I wrote about our buying a spiralizer, which cuts fruits and vegetables into long spiral strips. When we went to Bed Bath and Beyond there were two models: one with a vertical orientation and one with a horizontal orientation. I chose the vertical because it looked to me to be better made and because the horizontal had an “As Seen on TV” label on the box – something that is always off-putting to me. 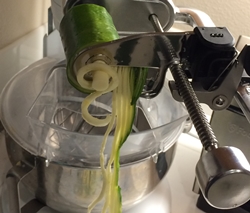 That turned out to be the wrong decision. The vertical model worked, but I had to hold my mouth just right to get it to spiralize properly. I learned later from my Kitchen Appliances Yahoo group that the horizontal model is easier to use. But that same group informed me that there is yet a Better Plan. It turns out that there is a KitchenAid spiralizer attachment. How cool is that?

One Saturday I was talking at breakfast about our convection oven in our late, lamented beautifully remodeled kitchen in Gilroy. My Dad asked if Terry and I wanted a counter-top convection oven for Christmas. Well, no. Not really. No room. However, I pointed him to the KitchenAid spiralizer attachment. My Dad came through for Christmas.

Our first foray with zucchini turned out superbly! We used the zucchini in place of spaghetti pasta with Marinara sauce and hot Italian sausage. Marvelous!

Then we tried broccoli stems. We used them in place of noodles in a Mongolian Beef recipe. That was great: less waste. One more cool thing. The user guide said fruits and vegetables must be at least 1 ½ inches in diameter. I tried a carrot, obviously smaller than that. It worked just fine.

Our new kitchen toy … I mean tool … is going to get a lot of use.