Two years ago today the moving van arrived at our new house here in Hemet. It was a Friday. 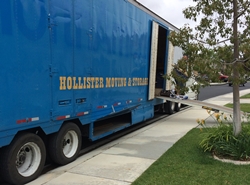 The moving van arrived at our house in Gilroy first thing in the morning on Cinco de Mayo. It was a Tuesday. We had a lot of stuff and the movers were there all day loading everything, including my Toyota Corolla.

Terry and I spent the night of the fifth at the Best Western in Gilroy and boarded Tasha at her resort. We got up early on Wednesday, had breakfast, picked up Tasha and headed south. Tasha was a good girl for us on the trip as we drove down I-5. When we got to the Grapevine we gave her a tranquilizer to keep her calm as we drove through the L.A. Basin. She snoozed most of the way.

As we got close to our new home I realized that the transponder to get through the community gate was in the back of the car, so I stopped at a Rite Aid to pull it out. Tasha got excited. “Is this where we get out?” No, Tasha, just a few more miles.

We arrived at our new, empty home and set up the air mattress. Tasha thought that was really cool. We spent two nights on the air mattress and the moving van arrived about 9:00 am on Friday. Tasha was delighted to get reacquainted with her familiar smells.

Here it is two years later. Tasha has adapted well. It is a very different life for us, but much of it is good. We have a lot to be grateful for.