I was looking for a light diversion in my book reading, and this book seemed to fill the bill. It is the compilation of essays that the author has written over decades of a life lived on Cape Cod.

The outer beach is what the locals call the Cape Cod shore. The author has lived there most of his life and the thousand mile reference is his calculation of the number of miles he has walked that beach. Each chapter discusses a particular point on the Cape in a number essays ordered chronologically. The essays go back as far as the 1960’s and are as recent as 2016.

As someone who loves the ocean, I was interested in the differences between his Cape Cod and my Pacific Coast. The main difference I noticed was the erosion threat there is far more severe than it is here. Houses and even lighthouses needed to be moved back to be preserved, or sometimes just let go to the ravages of the sea.

The book was rather on the long side and by the end I had somewhat more of Cape Cod than I really wanted. But that is OK. The book was the diversion that I was looking for and I enjoyed it.

AARP and the Summer of Love

When the latest issue of the AARP magazine arrived I did a double-take. I took a picture of the cover and posted it to Instagram. I wrote, “This is So Very Wrong. (Or maybe it’s just depressing…)”

Terry and I saw this recipe on The Kitchen and she wanted to try it (omitting entirely the tomato and fennel salad). I bought a London Broil at the store and prepared the rub on a recent Saturday. I left it to Terry to do the grilling. It turned out very nicely. Yes, I went a little heavy on the salt. I knew that from the outset. Otherwise it was really quite good.

Loaded baked potato made for a very nice side.

listening to the Dodgers

I wrote about this not long ago, but a recent column by Bill Plaschke in the Los Angeles Times caused me to compose a more complete reflection. He asked how Dodger fans who didn’t have Charter Spectrum followed the team. This is my response, lightly edited.

Regarding your column in today’s [Thursday 24 August] paper:

When I returned to Southern California in 2015 after 41 years away my wife and I had to decide on our communications provider: Time-Warner Cable or Verizon. We chose Verizon because we had them in Santa Clara County and because TW had a reputation for awful service. We made this decision knowing full well that we would not get the Dodger games.

There were times last year, Vin Scully’s last in the booth, when I momentarily regretted the decision, but then Vin was only doing home games. This year (Verizon having become Frontier and TW having become Charter Spectrum) my regrets are minimal. Seeing the game on KTLA on Tuesday [22 August] reminded me that I don’t like Joe Davis all that much, and I don’t terribly enjoy the Joe Davis – Orel Hershiser team. I would much rather listen to Charlie Steiner and Rick Monday on the radio. I also love listening to Rick doing play-by-play with Kevin Kennedy doing color.

KLAC doesn’t come in terribly well here in Hemet unless I’m in my car, but I have my MLB At Bat subscription.  My wife and I listen to jazz in the evening, but I follow the game on my iPad app, and if the Dodgers are about to pull out a victory I’ll punch up the audio and listen to Charlie call the ninth. It reminds me of listening to Dodger games on the radio with Vin Scully when I was a youngster.

When I was growing up maybe half a dozen games a year were broadcast on TV. Otherwise all we had was Vin Scully and Jerry Doggett on the radio. My family and I listened to Vin call Sandy Koufax’s perfect game on the radio on a hot evening in our living room. Nothing could have been more dramatic or exciting.

In my Bay Area years I listened to Hank Greenwald and later Jon Miller call Giants games on the radio, while I had Bill King and Lon Simmons for the A’s. With their marvelous word pictures I didn’t miss seeing the game on television at all.

Back here in SoCal I’m more than happy to listen to Charlie and Rick on the radio (even if it is via the internet). If Charlie is not making the road trip or doing television, I am content listening to Rick and Kevin. (And, by the way, Terry Smith is pretty darn good on the Angels radio broadcasts.)

Baseball is a sport very well suited to be followed on the radio. I don’t need TV to enjoy the game.

Sacred Music Friday: Underneath the Stars

Here’s another marvelous piece by my recent find, VOCES8. It’s Underneath the Stars by Kate Rusby, arranged by Jim Clements.

The stereo system we have originally came from Terry’s first marriage, very long ago.  But those components were swapped out and replaced until the only original part was the turntable.  Some time back Terry tried pulling out a vinyl record only to discover that it got eighty percent through the album and stuck. Every album. Exactly the same place. I tried blowing canned air into where the tone arm meets the base of the turntable. No difference. I tried replacing the cartridge. No change.

We cast about looking for someone to repair the turntable. We only came up against dead ends. Finally Terry said we should just get a new turntable.  I found many on Amazon. I selected the option with the USB connection in addition to the RCA analog cables. That way we can digitize those albums we want to.

It’s nice to have access to our vinyl again.

I have long relied on my FoodSaver to seal up leftovers. I create bags out of the plastic rolls that I buy, vacuum seal the leftovers, and put them in the freezer. They are preserved for a long time without frost or freezer burn. 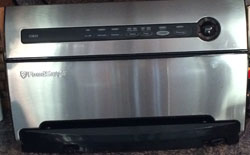 On one recent day, however, the “Tray Full” light was on and it would not seal. The drip tray was not full, but I tried to clean everything thoroughly. No change. The tray looked and felt to me as if it wasn’t seated properly. Terry agreed that it looked warped.

I went to the FoodSaver web site and found the parts section. Drip trays were listed, but not for my model. I called the 800 number and the agent found my part. Shipping was more than the part, but that was OK. The new tray arrived fairly promptly. I installed it and it clicked into place. I tried to seal a bag of food. All went well. I tried to seal up my leftover falafel mix which had been sitting in a plastic container in the freezer. My FoodSaver worked exactly as it was supposed to.

I’m glad to have my FoodSaver up and running again, and I’m glad I didn’t have to buy a new one.