I don’t generally get so carried away with my enthusiasm for a recipe, but this was really something. Marcela Valladolid showed this grilled adobo-rubbed chicken recipe on The Kitchen recently. Not long before she had posted a version of adobo chicken on her blog, but that one called for baking, so Terry and I were delighted to have a version that we could make in the heat of summer. 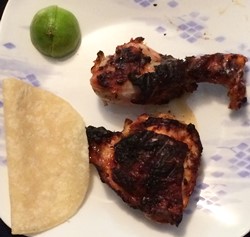 I used leg and thigh pieces rather than a whole chicken. I just don’t have the manual dexterity to butterfly (or spatchcock as some say) a chicken. I inadvertently failed to brown the peppers before adding the broth, and I used vegetable broth rather than chicken broth as I always do. I also used granulated onion rather than fresh onion. Otherwise I followed the recipe pretty closely.

The recipe is a little time-consuming but not difficult at all. It was certainly more than well worth the effort. I still have half a package of guajillo chilis so we’ll do this again.