← an update on my Toastmaster friends
a different hair experience →

This recipe for slow cooker beef shawarma came from the Fit Slow Cooker Queen. I deviated from the recipe quite a bit. 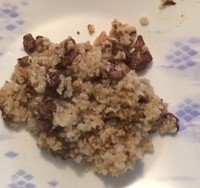 I replaced the white vinegar with red wine vinegar and za’atar with berbere, which is what I had on hand. The recipe didn’t call for it, but I marinated the meat in the spice mixture for ninety minutes before putting it into the slow cooker.

I replaced the two pounds of sirloin with a half pound of flap meat. I omitted the onion.

Now Fit Slow Cooker Queen is big on Whole30/Paleo/low carb which isn’t exactly how Terry and I roll. So this is what I did. I put the beef in the bottom of my slow cooker, then I added a cup of brown rice and two cups of combined water and vegetable stock. I cooked for two hours on high and four hours on low. (Remember that I have one of those old crock pots, which are no longer manufactured, that cook at a lower temperature.)

I should have cut the rice and water in half, nonetheless this was a very tasty dinner. Marinating the beef brought out a lot of flavor and this is well worth trying again with less rice.