← Sacred Music Friday: Underneath the Stars
keeping my FoodSaver going → 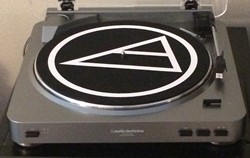 The stereo system we have originally came from Terry’s first marriage, very long ago.  But those components were swapped out and replaced until the only original part was the turntable.  Some time back Terry tried pulling out a vinyl record only to discover that it got eighty percent through the album and stuck. Every album. Exactly the same place. I tried blowing canned air into where the tone arm meets the base of the turntable. No difference. I tried replacing the cartridge. No change.

We cast about looking for someone to repair the turntable. We only came up against dead ends. Finally Terry said we should just get a new turntable.  I found many on Amazon. I selected the option with the USB connection in addition to the RCA analog cables. That way we can digitize those albums we want to.

It’s nice to have access to our vinyl again.