For my Jewish friends (and for the Jewish part of me).

Terry and I saw the 2016 Food Network Star winner Tregaye Fraser visiting The Kitchen on a recent Saturday. She demonstrated a recipe for Andouille Sausage Rice Pot. It looked tasty and pretty straightforward. I decided to give it a try. Sort of.

I’m not a big squash fan so I omitted the yellow squash and used broccoli and a carrot along with the zucchini. Instead of Andouille sausage I used Silva Louisiana Hot Links. I had them on hand and Terry and I really do enjoy those hot links. I used minced onion instead of a fresh onion and canned diced tomatoes instead of a fresh tomato.

It turned out quite well. Terry and I ate up most of the hot links, but we froze the leftover veggie mixture. It will make another good dinner using a different protein.

I always love it when I can get a second meal out of a recipe.

I have recently been rather critical of the Food Network and its programming. More travel and competition shows, fewer cooking shows. So I have to say that I am pleased to see a new show that I really enjoy.

It’s The Bobby and Damaris Show with, as you might expect, Bobby Flay and Damaris Phillips. They talk, they interact, and they cook. No annoying superfluous plot line as on many Food Network shows. And the second episode included a visit from Ina Garten. Delightful!

grocery checkers then and now

Since the death of Charles Schultz in 2000 we have had reruns of the Peanuts comic strip in our newspapers. Unlike comic strips such as Dennis the Menace, Schultz and his family were insistent that no else ever draw a Peanuts comic strip. So some of the strips we see today are pretty much timeless, while others are dated.

A recent series with Snoopy as the world famous grocery clerk caught my attention. Snoopy’s body language perfectly caught the way grocery checkers worked when I was a box boy at Alpha Beta in 1970-1971. There were no scanners. Each item had a price on it. With one hand on the item and the other on the cash register these ladies worked very quickly, even adding tax to non-food items without checking the tax table. They were fast, efficient, and accurate.

Today’s checkers have it easy with the scanners, though they still must know their produce. But the grocery checkers in the days of yore are a breed we will never see again.

This recipe for grilled fusion chicken first appeared in Sunset in August 2006.

I used regular olive oil and garlic instead of garlic-infused olive oil. I omitted the tequila, and used bottled lime juice and powdered instead of fresh ginger. I skipped the salt and the topping with the whipping cream. I let the chicken marinate for a half hour.

The result was tasty but the flavors weren’t bold. I should have made more marinade so it completely covered the chicken, and I should have let it marinate a good deal longer. With those changes I think this could be a really delicious dish.

In honor of the first day of autumn and in appreciation of the marvelous change in the weather in comparison to a couple of weeks ago.

One of my guilty pleasures is reading histories of popular culture. Good Booty is such a book. While both “black and white” and “body and soul” of the subtitle form part of the narrative, the book is largely about sex in American music. While you may see reviews of this book stating that it is a rock and roll history, it is far more than that. Powers goes back to the slave population of New Orleans and talks about the suggestive music they supposedly sang in their off hours. She discusses a performer in the early twentieth century whose performance included the words “it’s tight like that.”

For me, the most important part of the book admittedly was the coverage of modern rock, from Elvis on. To get there, however, you have to go through gospel. Powers writes:

In fact she tells us that Elvis was once turned down for membership in a gospel group.

The book is very well researched with copious footnotes. I do love the new Kindle footnote feature that pops the footnote up on the current page rather than taking you to the footnotes at the end of the book or chapter. Very cool.

I thought I saw a couple of glaring errors. In referring to the Carole King hit first made famous by The Shirelles she refers to the song as “Will You Love Me Tomorrow.”  A little research, however, shows that was in fact the title of the song, even though the lyrics include the word “still.”

However, I think she made one error with respect to Carly Simon. She says the song “Anticipation” was about foreplay. According to Sheila Weller in Girls Like Us, Simon wrote the song when Cat Stevens was three hours late for a planned date.

That small point aside, Good Booty is a fascinating, well-written, thoroughly researched work on popular culture.

It has been a year since Pastor Kathleen at Good Shepherd Episcopal retired. Father Rob, our interim rector, arrived on All Saints’ Sunday six weeks later.

So here we are. And where are we? Not in an optimal situation.

The congregation had not had an update on our rector search for a while, and since the work of the profile committee is long since over I had no source of inside information.

Then the most recent issue of our print church newsletter arrived by old-fashioned postal mail. The news was not good. We’d had three applicants, all of whom notified the search committee that they had accepted, or intended to accept, other positions.

Fr. Rob’s contract ends at the end of October. Would he consider extending it? I don’t know. But since he comes from Tulare, far to the north, and since his wife is facing some medical issues with respect to one leg, I wonder if he would. If he doesn’t I understand, but that would be unfortunate since he has provided us with some valuable leadership during this interim period.

So we keep on keeping on and the process continues.

This recipe for barbecue chicken foil packets comes from the blog Life Made Sweeter. Kelly, the bog owner, says she “shares healthier and authentic Asian recipes I grew up making.” All of her recipes I have made have been alive with flavor. This one was no exception.

For this recipe I used broccoli and bell pepper, as that’s want I had on hand. I used her instructions for the sauce, using a mesquite barbecue sauce. It was marvelous!

By the way, Penzeys new Brady Street cheese sprinkle is great on veggies. 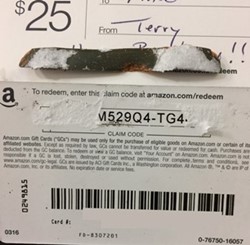 But when I went to redeem the gift card several weeks later I ran into problems. I pulled up the tape to get the redeem code and half of the redeem code came up with the tape. That doesn’t work. I submitted a support request to Amazon. They responded saying that they couldn’t find the gift card and to please submit an image of the card. I submitted what you see here. They responded saying that they had updated my account with the gift card balance. And indeed they had.