At the same time that we realized we needed to replace our toaster oven we noticed that the cord on our electric hot pot was getting hot as well. As my firefighter brother, who knows about such things, told us with respect to the toaster oven, that is a fire hazard waiting to happen.

We therefore put the hot pot in the cabinet in the garage and went to that store where we’ve been spending a lot of money lately: Bed Bath & Beyond. We bought a stove top whistling tea kettle.

As the weather starts to turn cooler and we drink more hot tea the kettle provides a comforting, reassuring sight and sound. 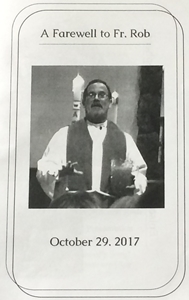 Fr. Rob first joined us on All Saints’ Sunday 2016. He has provided us with some superb leadership. He certainly gave the profile committee on which I served some much-needed guidance. I believe he has done the same for the vestry and the search committee. He has taken a personal interest as I have been developing my web and writing business.

I haven’t agreed with him on everything. We disagree on the dating of certain books of the Bible as well as on Biblical exegesis. I don’t like his emphasis on evangelism. But I love his high church mentality and his respect for the liturgy. He brought vestments out of the sacristy that I believe had sat untouched for a number of years.

It would be good if he could stay a while longer since we have not yet found a new rector, but the mileage we have paid him to come down from Tulare means that his earnings are maxed out in the eyes of the Church Pension Fund. That, combined with the wording of his contract, means that an extension is not possible.

Fr. Rob is one of those people about whom I can honestly say:

I hadn’t made fettuccine alfredo for many months, so I decided we were overdue. It’s incredibly simple even if it does use up three pans. Cook the fettuccine, heat up the store-bought Alfredo sauce, cut a boneless chicken breast into strips, season with Cajun seasoning, and cook in the frying pan.  Put the fettuccine on the plate, cover with Alfredo sauce, and top with the chicken.

Why bother with Olive Garden or Applebee’s?

I recently wrote about Marcela Valladolid’s departure from The Kitchen on Food Network. I wrote that I was sad to see her leave and that I was disappointed that she did not have the opportunity to say goodbye.

Marcela writes all about this in a deeply personal and touching blog post. After telling us that her reasons for leaving are, in the words of former co-host Sunny Anderson, nunya business, Marcela tells us a lot. She tells us that the original decision not to say goodbye was hers. She goes on to say that she regretted that and that she wished she had pushed for the opportunity to tell her fans she was leaving the show.

She also describes what led her to leave. Marcela tells us that the recipes presented on the show do not reflect who she is or her cooking style. She describes how the monthly trips to the East Coast to tape the show were wearing her down. She writes about family, and moving from San Diego to Los Angeles, merging two households into one.

You might want to read the blog entry for yourself. But have a Kleenex nearby when you do.

I was looking in my recipe database for a dinner that called for spinach. I had bought a bag of baby spinach because Terry was going to make quiche, but plans got changed. I needed to use the spinach before it went bad. I found this recipe from Pioneer Woman Ree Drummond.

I pretty much followed the recipe but when adding all of the ingredients at the end I kept the burner on low. Terry hates raw tomatoes, so I wanted to be sure the tomatoes were cooked. Of course only salt and pepper on the chicken was not at all acceptable for us, so I seasoned it with Penzeys 33rd and Galena.

It turned out very well. Terry loved it. A little bit of work, but well worth it.

the Dodgers in the World Series

I have to say something about the Dodgers making it to the World Series this year. The last time they were there, after all, was 1988.

In 1988 I was living in San Jose and was still a Dodger fan. I didn’t develop a fondness for the Giants until Terry and I were renting a house in Mountain View in the mid-1990’s and I listened to Hank Greenwald’s marvelous play-by-play on the radio when I was outside doing yard work. But during that famous game 1 in 1988 I turned the television on and saw that the Dodgers were behind. I turned the TV off. I missed Kirk Gibson’s famous walk-off home run that won the game for the Dodgers. Gibson, who was in a great deal of pain, and spent most of the game on the trainer’s table in the clubhouse, pulled on his uniform and came into the dugout. Tommy Lasorda sent him in to pinch hit and Gibson came through. And I missed it.

Terry and I returned to Southern California in 2015, and despite my years as a Bay Area snob and a Giants fan, could not help but return to rooting for the team that I grew up loving. The Dodgers moved to Los Angeles in 1958 when I was five and my dad and I began following them from the very beginning.

Now, 29 years later, the Dodgers are back in the World Series. It’s an exciting time.

It was kind of a synchronistic event that I came across this book. I was driving home from Toastmasters on a Thursday shortly after 1:00 pm listening to my regional NPR station. Normally another program was on at that hour, but for some reason they were broadcasting a segment of All Things Considered. Host Robert Siegel mentioned the name Stephen Jay Gould, of whom he said he was a fan. He then introduced Jonathan Losos, who grew up reading Gould and became a student of his.

I remember Stephen Jay Gould from the 1970’s and 1980’s when I avidly read his column in Natural History magazine as well as his books. Gould was an evolutionary biologist whom we lost way too soon in 2002. He had what were at the time some rather revolutionary theories about evolution. He was one of the first to propose the evolutionary link between dinosaurs and birds, now a widely accepted theory. He was also a proponent of “punctuated equilibrium” which stated that species generally remained stable, except for bursts of rapid change.

In the present book Losos describes his own current work and that of colleagues. Much of evolutionary theory has gone beyond Gould. One popular theory is “convergent evolution” which states “related species are more likely to convergently evolve the same traits when faced with similar selective pressures.” Take the body types of sharks and dolphins for example. The other theory presented here is that evolution can be rapid when environmental circumstances dictate.

At times the deluge of examples became a bit tedious, but in general this was fascinating reading. As Losos tells us near the end of the book, “At the end of the day, we know that evolution is not random or haphazard.”

I recently made a surprisingly easy chili supper.

I started with a half pound of 93% ground beef which I browned with chili con carne seasoning. I added a can of diced tomatoes and a can of kidney beans along with half a tube of tomato paste. I then threw in cumin, coriander, minced onion, red pepper flakes, and freshly ground black pepper. I let it simmer for a good long while.

All of the spices were, of course, from Penzeys.

I served the chili with corn chips. It made for a very tasty weeknight meal.