I was looking for a slow cooker recipe for a recent weeknight and was in the mood for beef. I came across this recipe for Mexican shredded beef when searching my recipe database. 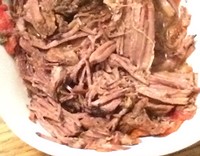 I simplified this recipe a great deal. I used chuck roast and made the spice mix as specified. (Although I think that I forgot the allspice.) I replaced the onion with minced onion. Rather than following all the steps I simply rubbed the beef with the spice mix, put it in the slow cooker, then added the stock (vegetable), lime juice, orange juice (orange/peach/mango actually), garlic, and diced tomatoes then turned on the slow cooker. I set the cooker on high for about four-and-a-half hours and then switched to low for another two-and-a-half.

I served it on rice the first night and then microwaved it and served it with tortillas two nights later. Quite a flavorful dish!