← Crucible of Faith
Sacred Music Friday: Sing Out with Joy to God Our Strength → 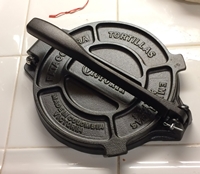 I had been thinking about getting a tortilla press for a long time. I had one that my uncle and aunt gave me many years ago, but it got lost somewhere along the way.

we decided that we wanted to give it a shot. I ordered a moderately-priced, highly rated tortilla press from Amazon and when it showed up we went to Cardenas, our Latino supermarket, to get fresh masa and their marvelous marinated flap meat. 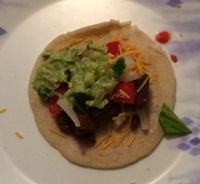 It’s not as easy as it looks. The first time we made a lot of mistakes and made a lot of modifications. The last three or so tortillas we made came out pretty well, but we still had some tweaking to do in the process.

The second go-round was a disaster. One of the mistakes we made the first time was

using plastic wrap between the press and the masa rather than a cut up ziplock bag as both Bobby and the instructions that came with the press recommended. Our first time out we bought the smallest bag of masa that the store had, but it was still twice what we needed. I asked Siri if we could freeze masa, but all I got back from her was the temperature in Massachusetts. A Google search turned up the result that yes, we could.

Wrong. The masa was crackly and would not hold together. I tried adding water and some additional polenta which I had on hand, but to no avail. No, masa can’t be frozen. Not the kind they make at Cardenas, anyway.

As the cliché goes, third time’s the charm. I bought a package of Bob’s Red Mill Masa Harina. We used a cut-up ziplock bag again, and I quickly learned that spraying it with olive oil from our Misto  (not a Mexican cooking staple, I know) was essential. I discovered that the ideal size tortilla came from a 1 ¼ ounce ball of masa, rather than one ounce as Bobby suggested. We learned to use a hamburger spatula rather than tongs when we cooked them. I rolled and pressed thenTerry cooked at 30 seconds a side in a dry (not oiled) cast iron frying pan. We got a rhythm going.

By Jove, I think they’ve got it!

The nice thing is that we know exactly what’s going into our tortillas: Bob’s Red Mill Masa Harina, just a bit of salt, and water. That’s it.

We’ll keep moving forward from there.