Terry and I have been making good progress learning how to use our tortilla press. We pretty much have the process down. It’s a team effort and we’re doing it well. 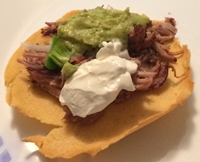 Recently I decided that I wanted to try tostada shells. That is less of team effort since the tortillas are put on a baking pan and then into the oven rather than being cooked on the stovetop. We gave it a shot and Terry helped where I needed assistance. I tried 10 minutes at 400, but that wasn’t enough so I made it 15. That worked.

I pulled out what I thought was leftover tostada beans from the freezer. It wasn’t. It was leftover carnitas. It still worked. We had carnitas tostadas with fresh-out-of-the-oven shells.