when box boys were great

Not long ago I checked in on Facebook at my local supermarket and made the following comment:

Checkers and baggers don’t know how to properly fill a bag anymore. By gum, when I was a box boy we knew how to do it right, dag nab it!

I was surprised by the number of reactions I got. But it’s a sore point for me. I have some history there. 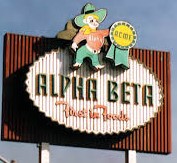 I was a box boy in high school. I first worked at Village Market, one of three stores owned by the Goodwin family of Crestline up in the San Bernardino mountains. I  then worked at the chain store Alpha Beta, which I enjoyed. There were several of us Hemet High seniors who worked there and we took pride in what we did. We developed a rhythm of keeping one hand in the bag to place the item while filling the bag with the other. Of course this was when we used paper bags. That technique was not possible with the advent of the single-use plastic grocery bag. Fortunately the voters in California last year voted to ban those single-use bags.

That means that people bring their own bags of different shapes and sizes, which, as one commenter suggested, is perhaps confusing the staff. But as I replied, “Put me at the end of a checkstand and I’ll fill each bag properly, no matter its shape or size.”

How hard can it be? Neither checker nor bagger seems to understand that if you put the milk and juice in first the other stuff will fit around it. But it’s easier for them to leave those items out of the bag. Over at Sprouts they have the same problem. They don’t understand how to position my frozen entrees so that everything else fits in the bag as well. sigh (Although I have to say that the fellow at Sprouts on Sunday did a really good job. I was impressed. I wish that was the rule and not the exception.)

I was looking for something in my database with the label “comfort food” and came across this cheesy chicken pasta with broccoli and bacon recipe by Geoffrey Zakarian, which I originally saw on The Kitchen on Food Network. It definitely qualified. Although I scaled back the portions considerably, this was a lot more work than it appeared at first glance. Fortunately Terry pitched in as my sous chef and all went smoothly. I used Fontina cheese as the store did not have Gruyere. For the chicken I used packaged cooked pollo asado from the self-service deli.

This dish turned out to be a tasty meal for a cold, wet evening. The crumbled bacon really makes this meal, so don’t forget it as I nearly did. It was indeed an enjoyable dinner.

I had the privilege for several months of writing customer success stories for an agency in Silicon Valley. I really enjoyed the work. It was interesting and it kept me on my toes. I also had to keep in mind which client I was writing for. All of the agency’s clients except for one used the Associated Press Stylebook (AP). The one holdout client used the Chicago Manual of Style, which I prefer.

There are other style guides, of course. The Modern Language Association has its own style guide, but that is followed mostly in the academic world and not so much in business writing. The Council of Scientific Editors publishes the Scientific Style and Format guide, which I am told states that numbers are never spelled out.

There is much that all agree on with respect to proper grammar and syntax. It’s important to maintain those standards. But not everything is set in stone. As I hear from many experts, the important thing is to be consistent within a given work. I am partial to Chicago, but I can write to AP and I do.

Sacred Music Friday: In the Midst of New Dimensions

The choir and congregation of First Plymouth Church, Lincoln Nebraska.

I have had this recipe in my database since I transferred all of my recipes there from a pair of 3-ring binders a number of years ago. It came from a now dormant Yahoo group called the gourmet garden of spicy vegetarian eatin’.

The recipe calls for mixing cooked rice and salsa with cans of diced tomatoes, black beans, diced green chilis along with sour cream, green onions, and Monterey Jack cheese. It is then transferred to a baking dish, topped with tortillas and crushed corn chips, and baked at 350 for 25 minutes.

I pretty much followed this formula, though I omitted the green onions. I used whole corn chips rather than crushed, which turned out to be a good move.

It all turned out better than I anticipated. Terry certainly enjoyed it and there was plenty for leftovers.

I was feeling that it was hard to stay engaged with my church, Episcopal Church of the Good Shepherd here in Hemet. I have written about our rector’s retirement, about the useful and positive year we had with out interim, Fr. Rob, and about how after that year we still did not have a new rector. What we have been doing is going week-to-week. Various priests in the area who are available and who don’t have their own parish show up on Sunday morning to conduct the service. I was glad our lay leadership was seeing to that since the alternative is lay-led Morning Prayer, as we can’t have Communion without an ordained priest. Still, I was frustrated. These supply priests, as they are called, are capable and competent, but they are visitors and don’t have a personal investment in the parish.

Then we all got a surprise. Our very capable and competent communications director, Sandra, notified our Senior Warden (i.e. board president) that she had found a full-time position at a church in Tennessee. Sandra had been only part-time here.

I was then asked if I would help out by maintaining the church web site and handling the weekly e-mail newsletter. I was going to volunteer anyway so I was happy to pitch in. Added to that is the church Facebook page and monitoring the two email accounts.

This gives me a new sense of purpose at Good Shepherd and I am happy to be involved.

I have had this recipe from Cooking Light in my database for quite some time. The recipe calls for sea bass, not yellowfin tuna, but the store had no sea bass. Yellowfin is different from sea bass in that it is darker and meatier, but they share the quality of being a firm fish.

I made the marinade as specified but gave it an hour plus rather than 45 minutes. I also made the spice mixture as specified, leaving out the salt. The recipe called for grilling the fish on the stovetop, but I cooked it in our toaster oven on the convection setting (oh, how I miss our convection oven in Gilroy!) at 425 for about 15 minutes.

I served it with Rice-A-Roni broccoli and cheese. It was very tasty and worked out well. But I think this one deserves another go round actually using sea bass.

look what they’ve done to my Star Trek, Ma

I put up with the darker vision in Star Trek: Discovery throughout chapter 1 of season 1. I didn’t like it but there were some redeeming qualities.

After the hiatus and the start of chapter 2, season 1 in January Terry and I have had it. The movie reboot with the younger cast from the original series totally messed up the space-time continuum (the planet Vulcan destroyed, really?) but for the most part stayed true to the ideals and vision of Star Trek.

Discovery in chapter 2 of season 1 has gone beyond the pale. Violence. Brutality. Torture. The crew finds itself in a parallel universe full of all these things, and from what I can surmise, the final six episodes will all take place in this universe.

CBS All Access: what have you done to my Star Trek? I’ve cancelled my subscription.

I have shared this before, but it’s worth sharing again. And this is a really good performance.

This recipe was a guest post on one of my favorite recipe blogs, The Recipe Critic. The recipes there are generally straightforward and reliable, and this one was no exception.

I pretty much followed the recipe as specified, except that I scaled it back to two servings. And, of course, I used vegetable rather than chicken broth. I did omit the cilantro. Terry hates cilantro.

The result was a very tasty and relatively simple. It was definitely a one pan dinner.