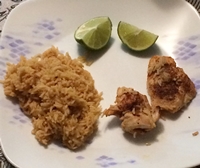 This recipe was a guest post on one of my favorite recipe blogs, The Recipe Critic. The recipes there are generally straightforward and reliable, and this one was no exception.

I pretty much followed the recipe as specified, except that I scaled it back to two servings. And, of course, I used vegetable rather than chicken broth. I did omit the cilantro. Terry hates cilantro.

The result was a very tasty and relatively simple. It was definitely a one pan dinner.