I have written periodically about my FoodSaver which I use to seal up and freeze leftovers. It is an essential part of our cooking routine and, as with olive oil, I would be lost without it.

Last year it stopped working properly, but I was able to fix the problem by replacing the drip tray.

Recently it started behaving badly again, and I had to coax and cajole it to properly seal up food. I briefly thought that it might need replacing, but then I realized that replacing parts rather than the whole thing was probably the best, and by far least expensive, course.

I went to the FoodSaver web site and it didn’t have what I wanted. I tried calling, but I went through the Sunbeam menu tree and when I got to FoodSaver I encountered a busy signal.

That is, as I said, very important to our cooking routine.

For some reason Yum! Brands shortened Kentucky Fried Chicken to simply KFC a few years back. In any case the food is quite unchanged and a lot of people, myself included, have a fondness for the standard Original Recipe. I found this list of seasonings to emulate KFC Original Recipe on the Yahoo Pressure Cooker Recipes group nearly two years ago. It’s by a guy named Edward Evans. I just recently got around to trying it.

The recipe called for mixing the ingredients with flour and dredging the chicken in it, which makes perfect sense. Beyond that, the cooking instructions were rather odd, and omitted any mention of liquids, which are essential for pressure cooking. Here’s what I did: 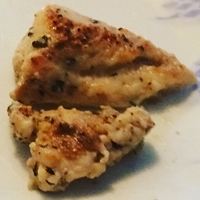 I returned the chicken to the pressure cooker and added water to just below the level of the trivet, a little less than two cups. I had heated the water in the microwave while I was browning the chicken so my Cuisinart came up to pressure very quickly. I cooked on high for ten minutes and allowed ten minutes for natural pressure release before manually releasing the remaining pressure.

I was quite pleased with the result. The chicken really did have a taste reminiscent of KFC.

I was looking for my next book to read when this title showed up in one of my BookBub emails on sale for $1.99. The book got significant critical recognition, so I thought it worth a try.

The novel started out engaging enough. The first person female narrator graduated from the film program at the University of Nevada, Reno in the 1970s. She moved to New York City, but returned to Nevada where she set out across the salt flats on a borrowed Valera motorcycle, that being a fictional Italian make. Her boyfriend, Sandro Valera, is a company heir and an artist. He had obtained the bike for her, which she managed to destroy on her salt flat run. She then proceeded to break the land speed record for women on a different motorcycle which an Italian had used in an attempt to break the men’s land speed record.

Back in New York she spends a lot of time in the art world with Sandro and his group. Eventually I felt that the novel was just bogged down with the goings on there in New York. My iPad Kindle app told me that I was 41% through the book and I just didn’t care what happened to the narrator, her boyfriend, or the other characters. 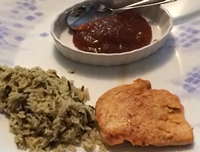 I pulled this recipe for spicy chicken with orange-chipotle sauce out of my Living Cookbook database for a recent Saturday dinner. It originally appeared in Coastal Living. I followed the recipe pretty closely although I omitted the salt and chives as usual.

I generally don’t like to cook with sweet stuff, such as the orange marmalade that this recipe calls for, but this one worked out really well. It’s the orange marmalade, vinegar, and chipotle sauce that really makes this dish, and I’m glad that I served it on the side.

I made a rice mix for the starch and was quite happy with the combined result.

The Glasgow Phoenix Choir, “Benedictus” by Karl Jenkins, from The Armed Man: A Mass For Peace, at St Margaret’s Church, Dalry on 7 February 2015

I generally don’t buy avocados in the grocery store, as much as I love guacamole. The avocados often seem to be either under or over ripe. I can depend on the packaged Wholly Guacamole to be reliable.

Recently, however, my sister-in-law gave me three avocados. I used one of them to make guacamole when I fixed carne asada tacos (with our homemade tortillas, of course).

I didn’t follow a specific recipe. Rather, I took ideas from a couple of different recipes and included a few different ingredients. I put in a splash of red wine vinegar and some lemon juice. I seasoned it with granulated garlic and medium hot chili powder then added some diced tomato.

I was quite pleased. Maybe Wholly Guacamole has something to worry about.

The Celtic World
Professor Jennifer Paxton, PhD
The Great Courses
Audio download $34.95 when on sale
If the course is not on sale, check back – the sale price will come around again

Jennifer Paxton is one of the most engaging lecturers at The Great Courses and the subject matter for this course is fascinating.

Paxton starts out by telling us that many of the conceptions that scholarship has had about the Celts have been proven wrong in recent years. She spends a good deal of time setting us straight. For example there was long a belief that the Celts of mainland Europe, the Gauls of Julius Caesar for example, were related to the Celts of Ireland and Scotland. Later evidence, including what we have learned from genetics, tells us that the peoples are not related. Paxton demonstrates that common culture and art does not necessarily mean a racial or genetic relationship.

Paxton busts other myths as well. She tells us that Celtic Christianity wasn’t that much different from mainline Christianity. She says that Sir William Wallace (of Bravehart fame) and his men would never have worn blue paint on their faces. She even disappoints aficionados of Scottish festivals by explaining that tartans originally varied by geographic region and not by clan. Assigning a specific tartan to a particular clan is only a couple of hundred years old and was a result of the Celtic revival of the nineteenth century.

If such material interests you, you will likely love this course. You might consider a video version, as I’m sure I missed a lot with respect to art and visual depictions of geographical locations.

We had some leftover slow cooker whole chicken in the freezer, so I pulled out this recipe for chicken tetrazzini. It was a little bit of work, but really not bad at all.

I made quite a few modifications to the recipe.The recipe called for egg noodles, but I used penne pasta as that was what I had on hand. It called for parmesan cheese, but I used Romano because the fresh parmesan at the grocery store was exorbitantly expensive.I used half-and-half rather than milk or cream, which the recipe mentioned as an option. I used water rather than broth since I was remiss in keeping the pantry properly stocked. I omitted the salt, of course.

As for seasoning, this recipe was seriously lacking. As you’re likely aware I don’t cook that way. I kicked things up somewhat by adding Harris Ranch lemon garlic spice. It all came together quite nicely and made for some good leftovers.