When I make soft tacos I often buy the marinated flap meat at the grocery store. Our regional chain has a couple of really tasty marinades. Sometimes, however, I will make my own marinade. That was the case recently. I bought a London Broil for a Saturday dinner, but I only needed a third of it for that meal. I cut the other two-thirds into two pieces and froze them. One day I pulled out one of the pieces to chop up and marinate.

In looking through the marinades in my recipe database I only had one true carne asada-style marinade and it wasn’t exactly what I was looking for. Then I saw I had saved an infographic entitled Make a Marinade from the Food Network. That image provided the elements for making your own marinades. Very simple: oil, acid, flavors, and salt. I thought that was very cool in that it in essence gives you permission to innovate and come up with your own creation.

Here’s what I did. For the oil I used olive oil (of course). For the acid I used red wine vinegar and the juice of half a lemon. For flavor I used granulated onion, granulated garlic, hot chili powder, adobo seasoning, and fresh ground black pepper along with a splash of passion/orange/guava juice from Sprouts. As for the salt, I omitted it. You know me. I let the meat marinate for over six hours.

The result was a very flavorful carne asada.

I now know that I can be creative with my marinades.

This recipe for brown butter spicy garlic shrimp made for a very tasty Sunday dinner. We had steak the previous evening and I wanted to balance that out, so shrimp seemed to be a great choice for doing so.

It’s a very simple recipe. You sauté the shrimp in butter and season with salt and pepper, garlic, the juice of one lemon, red pepper flakes and parsley. I omitted the salt and parsley. The recipe says to serve with angel hair pasta, but I made yellow rice instead.

The dish was very tasty with bold flavors and the yellow rice was perfect as a side dish.

Or: Why Microsoft Doesn’t Win Friends and Influence People

I have both a desktop and a laptop computer. Both run Windows 10. On my laptop Windows has been telling me that a recent Windows update installation failed. Some research told me that this is a known problem and in most cases the installation succeeded and the failure was being incorrectly reported. However, Windows kept telling me that I had an update ready and I needed to restart my computer. Every time after the restart it told me that the installation failed and Windows Update kept insisting that my Windows installation was out of date and my computer was at risk. It was the same update each time, by the way.

I continued to search answers.microsoft.com for any resolution to this issue. Finally, recently, I saw mention of an April update to Windows 10 and I found a pointer to a manual installation tool. It turns out that this was a major update and took several hours.

When it was all done Windows told me, “Oh, by the way, you no longer have Homegroup.”

I should be able to share files between the two computers with the build-in Windows networking capability even without Homegroup, but right now my laptop can’t see my desktop. grrr…

There are workarounds. I have Dropbox on both systems and will use that. It’s a bit more effort than using Homegroup but not a terrible inconvenience. Still, Microsoft should not be breaking things that worked previously.

I’m not a big steak person. One of our regular Saturday dinners is a his and hers surf and turf night.Terry has steak and I have halibut. Sometimes, however, I plan a Saturday dinner where we both have steak. I did that recently using a spice-rubbed flank steak recipe from Southern Living.

The rub calls for brown sugar, cumin, oregano, salt, allspice, and olive oil. I bought a London Broil rather than a flank steak. Terry did the cooking and gave the rub closer to a full hour as opposed to the twenty minutes the recipe specified. She of course omitted the salt and broiled the steaks in the toaster oven rather than grilling them.

It was one of the best rubs we’ve tried. The allspice gave it a distinctive taste and the olive oil made for a really nice wet rub. Well worth doing again.

For the Beauty of the Earth, arranged by Brian Childers, First Plymouth Church, Lincoln Nebraska. Strictly instrumental with flute and handbells. Really nice.

Memories of the Great & the Good

Many of us knew Alistair Cooke as the avuncular British host of Masterpiece Theater for so many years, but he did a great deal more than that. He broadcast his long-running radio program, Letter from America, back to the United Kingdom. He was also a prolific chronicler of individuals, history, politics, and life in the United States.

This volume is a collection of profiles that he wrote about a variety of individuals, ranging from Eleanor Roosevelt to Erma Bombeck to the golfer Bobby Jones. The essays were written across several decades. Cooke has an engaging writing style and often seems to understand the United States better than Americans themselves. These are essays well worth reading.

I was looking for something simple for a recent Friday dinner and thought that a whole slow cooker chicken would work. The grocery store’s chickens were about six pounds, a lot for two people, but I bought one anyway. I hated to toss the neck, giblets, and so on, but I am not skilled in dealing with such parts.

I got serious about the seasoning, and created a rub with cumin, coriander, oregano, granulated onion, granulated garlic, cayenne, and smoked paprika. I turned the crock pot on high for three and a half hours and low for another four.

The chicken was fall-off-the-bone tender and had a distinct Middle Eastern taste. And the advantage over a rotisserie chicken was neither Terry nor I had to run out to the grocery store at dinner time.

Not only that, there was enough meat left over to seal up and freeze for two more meals.

Good stuff, all of that.

Where I left things with season one of Star Trek: Discovery was that I was totally annoyed, frustrated, and ticked off (look what they’ve done to my Star Trek, Ma). I cancelled my CBS All Access account and Terry and I did not watch the final few episodes.

The folks at trekmovie.com recently offered an update on plans for season two. They quote showrunner (I hate that term, but it’s a real thing in Hollywood these days) Aaron Harberts on plans for the plots and themes in season two:

What is the role of serendipity versus science? Is there a story about faith to be told? Leaps of faith. We are dealing with space. We are dealing with things that can’t be explained and you have a character like Michael Burnham who believes there is an explanation for everything. And it doesn’t just mean religion. It means patterns in our lives. It means connections you can’t explain.

[Season one] was an interesting season because it was set against the backdrop of war. One of things we are looking forward to in season two is a tone that we can now be in a more exploratory phase and a more diplomatic phase – maybe a bit more of a Trekian chapter.

That’s encouraging. I may just renew my subscription to CBS All Access and give it another try when the show returns in the fall.

I stopped watching Dinner at Tiffani’s a while back. I found Tiffani Thiessen to be rather cloying, and her conversations with her B-list Hollywood friends vapid and inane, not to put too fine a point on it. 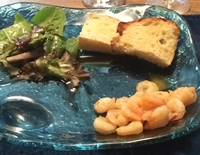 She did, however, have a number of good recipes, and for that I give her credit. I saved several before I stopped watching, and this orange-chipotle shrimp recipe is one of them.

For the orange juice I used a fresh-squeezed orange and for the shrimp I used the small shrimp, sometimes sold as bay shrimp. Instead of a baguette I bought a French loaf, so it could serve double duty for sandwiches the following week. I used it to make toasted garlic bread slices. I omitted the cilantro entirely.

Terry decided that putting the shrimp on the garlic bread was tasty. That did work well.

Terry said that I could add this one to the rotation. That’s always a good sign.

We used a short version of this on Sunday as part of the Prayers of the People. This was in support of the Vida Joven orphanage in Tijuana, which our diocese supports.