I ought to make more use of my pressure cooker in the summer months. It keeps more heat inside the appliance rather than dissipating it into the kitchen as with the stovetop or oven.

Cuban lentil chorizo stew is an old classic. Developed by Ray, owner of Pressure Cooker Recipes on Yahoo Groups, I do my own take. 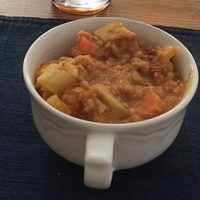 This time I diced two Yukon gold potatoes, sliced a carrot and chopped a yellow bell pepper. I added a cup of lentils. I had a nearly full carton of vegetable broth which I emptied into the pressure cooker.

The chorizo part was a one-off. In the freezer I had a quarter tube of Trader Joe’s soy chorizo and a quarter pound of pork chorizo from the grocery store meat department. (The butcher had given me chorizo instead of mild Italian sausage and I didn’t catch it.) I put both in. The Trader Joe’s alone would have been plenty, but the pork added some nice additional flavor. (I have learned that any more than a quarter package of the Trader Joe’s overwhelms any dish.)

I set my Cuisinart CPC-600 to 10 minutes on high and allowed 15 minutes when the time was up before releasing the pressure.

This one turned out spicy, tasty, and filling.