When we were getting ready to leave Gilroy one of the things we got rid of was a four-drawer dresser that was in the second bedroom. When we got here I realized that I could have used it for some of my clothes.

Trying to economize, we bought a four-drawer fabric chest. It worked, but it was wobbly. We both

kept our watches there at night and when opening or closing a drawer a watch would often fall off as the chest vibrated.

We finally decided that the thing was simply too much of a pain. While still needing to economize we found an attractive, solid three-drawer unit that fit very nicely into the bedroom.

I have long purchased third-party plastic rolls for my FoodSaver. The quality is better (to my mind) and prices less expensive than buying the FoodSaver name brand. I have always purchased fifty foot rolls, which is fine, except that the FoodSaver only holds a roll half that size. So I have to unroll half the roll, re-roll it and cut the roll in half.

No longer. The good folks at FoodVacBags now offer a self-contained hundred foot roll in a box with its own blade unit. I put it on the counter and pull out and cut lengths as I need them. 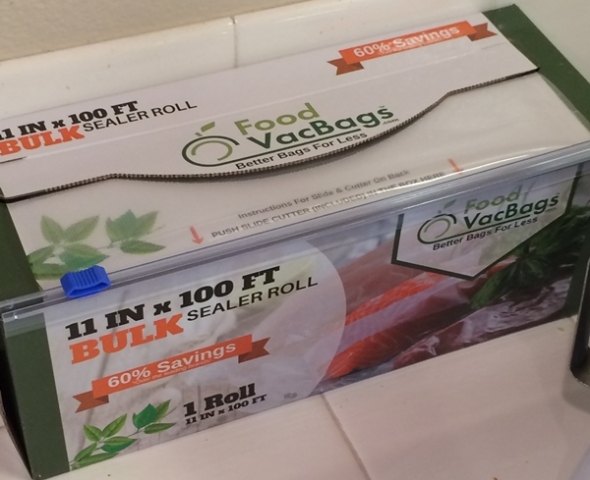 So on a recent Saturday we packed up three years worth of household hazardous waste and headed off to the landfill. I was intimidated by the line of vehicles and all the trucks, but the staff there provided us with a shortcut and we quickly dropped off all those batteries and fluorescent lights. Easy enough.

I suppose most people just toss that stuff in the trash despite the fact that it’s not legal. Terry and I, however, do try to do the Right Thing whenever possible.

I don’t generally put my own recipes in my Living Cookbook database, but occasionally I do. It seems I found this one worth saving. 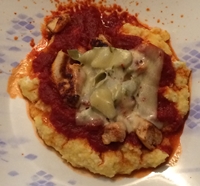 Make polenta using your favorite recipe. Cut a boneless chicken breast into bite-sized pieces, season it with smoked paprika and cook in a skillet. Heat up spaghetti or marinara sauce. Put the polenta on a plate, add the sauce, put the chicken on top, cover it with a slice of Provolone and microwave it for about a minute. Good stuff!

This time I made a couple of variations. I threw in pieces of artichoke heart along with the chicken and used pepper jack cheese instead of Provolone. Even better stuff, I do believe.

Sacred Music Friday: All Creatures of Our God and King

I love my iPad and I use it every evening. But the iPad (or any tablet) is not good for everything.

One thing it’s not good for (to my mind) is magazines. As it happens I can get many magazines for my iPad free through the library. There are many quality magazines available, such as the New Yorker. But I’ve given up reading magazines that way. The iPad is too small to really enjoy them in that format. While I can increase the font size, that just becomes awkward and uncomfortable to read.

Magazines are best suited to the print format.