The source recipe for this meal was pan-roasted cod in spicy Thai broth. It appeared in the October 2014 Coastal Living, and was excerpted from the then just-released The Pollan Family Table. 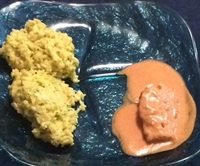 The broth contains coconut milk, lime juice, garlic, red curry paste, dry white wine, fish sauce, sugar, coriander, ginger, and tamarind paste. I failed to put coconut milk on the shopping list, and so used leftover condensed milk I had in the refrigerator. I bought the lime and failed to use it. That’s me. I couldn’t find tamarind paste so I used a quarter of a package of tamarind soup mix.

It was supposed to be a broth. It came out a sauce. It was marvelous.

I cooked the cod on the stove top rather than in the oven.

The overall result was superb. I rarely give a recipe five stars in my database, but this was one.