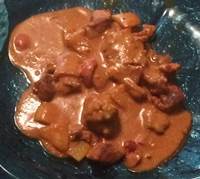 I saw this recipe for paprika chicken on Trisha Yearwood’s Food Network program. The recipe called for a whole chicken cut up; I used boneless leg meat. The recipe called for onions, which I omitted as usual. I pretty much followed the recipe with respect to the seasonings, browning the chicken, and using bell pepper, tomato paste, broth, and sour cream.

The recipe took less time than the recipe specified because I used boneless chicken rather than bone-in chicken pieces. It turned out quite well.

Terry enjoyed it, which is always the most important thing.