Have a safe, festive, and fun New Year’s Eve!

Here’s my recollection of my trip to the 1975 Rose Parade.

After we have dinner Terry and I put our feet up on the bed and read the newspaper before going on to other reading material. We have a ceiling fan light and two floor lamps. I had long felt that the light from the ceiling fan was insufficient and finally I asked Terry for her thoughts. She agreed.

The ceiling fan light uses bulbs with the thin candelabra-style base. I headed over to Lowe’s to find something brighter. I found GE Reveal clear 60 watt bulbs. I bought those and installed them. That really has made a huge difference.

We’re really not supposed to use more than 40 watt bulbs in that fixture, but we only use the lights for a few hours each evening and we’re right there the entire time. If need be we can replace them with 60 watt-equivalent LEDs, which I might do anyway, just to be on the safe side.

In any case, we really love the increased level of lighting.

A while back I wrote a rather self-satisfied blog entry about how I no longer craved sweets. It was true at the time, but things change.

I have been dealing with a health issue and for several weeks I had to grapple with a medical insurance coverage issue, which, finally, seems to have been resolved. Never mind what’s happening in Washington. In the midst of all that I began buying chocolate chip cookie dough and baking cookies.

It’s not terribly healthy, but it’s comforting and helps relieve the stress.

You’re right, Linda Ellerbee, “And so it goes.”

Joy and Peace of the day to you all.

Peace and Blessings on this special evening. 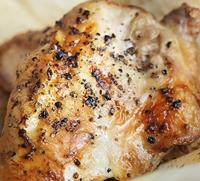 In looking for a Mexican dish for a weeknight meal I found Ree Drummond’s pollo asado recipe in my database.

The recipe specifies a marinade of orange juice, lemon juice, lime juice and olive oil. It specified whole chicken legs, but I used boneless leg meat. The recipe said to grill the chicken, but I cooked it on the broil and then convection settings on my toaster oven. The recipe is supposed to be served with tortillas, but I simply served the chicken.

It was really very tasty. Terry liked it a good deal. But it was not terribly visually appealing, so I’m providing you with a stock photo instead.

I wrote recently about how much we like our Roku device and how much use we get out of it. But it is attached to a single television – the one in the living room. When Terry is watching one of her shows I would head into the bedroom and watch a show on Netflix or Hulu using the Blu-ray player. But that device is awkward and clumsy to use and didn’t show my full watch list for those services.

A Roku Express is not that expensive, so I decided to get one for the bedroom. It meant disconnecting the Blu-ray, as our cheap bedroom flat screen only has two HDMI ports (the other one being connected to cable) but it’s a fair trade-off. When Terry is watching her DVR’d Supergirl or Black Lightning I have familiar and easy access to my Netflix programs in the bedroom.

I pay a lot of attention to one-skillet recipes. They make life easier. I was looking for a chicken one skillet dinner, as we had eaten a lot of beef in the preceding days. I found this Tuscan chicken skillet in my database, originally from the kitchn.

The recipe called for cremini mushrooms, white beans, sun-dried tomatoes, garlic, and broth. I bought regular mushrooms as cremini are rather hard to find in these parts. I had the last portion of a bag of sun-dried tomatoes on hand.

It was the kind of simple one-skillet recipe that I enjoy making.