telling myself to get over it 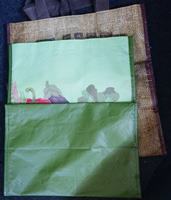 In the November elections of 2106 Californians did a number of good things despite the horrific result of the presidential race. One thing we did was to vote to ban single-use plastic bags in grocery stores and large drug stores like CVS. That didn’t have a direct impact on Terry and me as we were already using reusable bags. But I was delighted to see this and kept an eye on how this played out.

Despite some initial confusion most California consumers took to the new requirement and began bringing their own bags rather than paying a nickel per reusable plastic bag. I found myself playing my own private bag police, however. I watched to see if people in the store were bringing their own bags and if someone in line in front of me hadn’t I would try to discretely catch a glimpse of the cash register display to see if they were actually being charged for their bags.

Recently it hit me that’s it’s been over two years. The law is largely working well. I don’t need to be grocery bag monitor. It’s time for me to get over it.