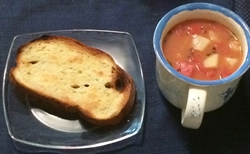 Terry recently said that she wanted to have Manhattan clam chowder, so I pulled up this recipe from my database, which originally appeared in the Cooking Light issue of May 1999.

It’s really quite straightforward, calling for garlic, a chopped and peeled baking potato, oregano, black pepper, diced tomatoes, and clam juice along with the clams. Terry added cumin and chili powder and a couple of slices of microwaved bacon.

I took care of the garlic bread. It made for a really nice dinner on a cold evening.