I have been baking sourdough bread for many years. When I lived in Gilroy and was getting serious about baking bread Terry met a former boss of hers on one of her business trips so he could give her some sourdough starter that he had been maintaining for several decades. 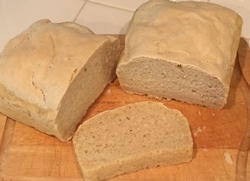 I was very religious about maintaining it, and kept it going for several years. The starter made the move south with us when we left Gilroy. However, once we got here and I didn’t get back into baking bread I failed to keep it going and it died. I felt bad about that.

With the recent demise of our oven and the purchase of a new stove with a convection oven and a proof setting, I got back into bread baking mode. I placed an order with King Arthur flower for some ingredients not available locally, and that included sourdough starter. As soon as the order arrived I gave the starter a lot of loving attention and made sure to carefully feed it, which involves adding flour and water. I did so for a week and then baked a loaf of bread using the French bread flour I had also ordered from King Arthur.

I’m delighted to be baking sourdough bread once again.