← goodbye to all that
another new appliance →

No, absolutely nothing
No, I regret nothing
—Édith Piaf

Regrets, I’ve had a few
But then again, too few to mention
—Paul Anka as sung by Frank Sinatra

Several weeks ago I gave a speech at Toastmasters about regrets. At the end of the speech I made clear that I was very happy with most aspects of my life and my varied career choices. I said I was certainly very happy with my life and marriage today. But in the body of the speech I wanted to make clear that while my complaints are few, I am not of the “I have no regrets” philosophy. I listed several.

One regret that I did not mention, but which I should have, is giving my KitchenAid tilt-head stand mixer to my sister-in-law Julie, Terry’s sister. I had owned the mixer since 1977, when my parents bought it for me before I headed off to open up the new B. Dalton Bookseller in Laredo, Texas. It was about 2003 or 2004, I suppose, when I saw the larger capacity KitchenAid bowl-lift mixer on sale at our new Lowe’s in Gilroy and decided that I had to have it. 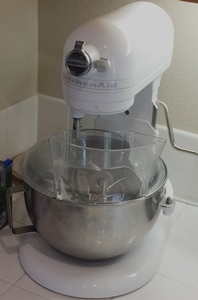 What I failed to take into account was the fact that in 1986 Hobart Corporation, those folks that make the industrial-grade mixers for pizzerias and bakeries, sold KitchenAid to Whirlpool. The mixer I bought was not nearly as well made or sturdy as the one I gave to Julie.

The bowl-lift mixer has performed well over the years, nonetheless. However, last week it came to the end of its useful life. It still mixes, but no longer kneads dough. It just sits there making a high-pitched squeaking noise that sends Tasha outside. With our new oven and the bread baking I am doing once again, kneading dough is a central mission for my KitchenAid.

I ought not complain given that the mixer has lasted fifteen-plus years. But the KitchenAid I gave Julie is still going strong, as far as I know, and she makes good use of it. She would not be willing, nor would I even consider asking her, to give it back. So Terry and I had to begin the quest for a replacement.

We went to our local Bed Bath & Beyond, but they didn’t have want we wanted. We came home and pulled up Amazon (of course). We settled on a 5-quart tilt-head Artisan model. It is not without reason, after all, that that is the model you often see on Food Network.

It is scheduled to arrive today. I am looking forward to a long and productive relationship. And I will, of course, keep you updated.