← The Prodigal Tongue
goodbye to all that →

how did I miss that?

It occurred to me that I had not seen a copy of our favorite cooking magazine, Cooking Light, for a while. I did some checking online and I discovered that the magazine published its final issue in December of last year. 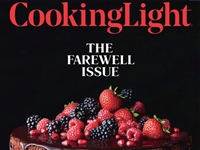 Time Inc. sold its magazine business to Meredith Corporation (think Better Homes and Gardens) and Meredith started cutting back. The fine folks there decided that readers of Cooking Light would do just fine with their own Eating Well.

The thing is that Terry and I, though subscribers, never received that farewell issue of Cooking Light. We would have noticed. Big Time. For sure. It would have struck me like a lightning bolt had I actually pulled that issue out of our mailbox. I checked with Terry just in case I had missed something . She agreed that I hadn’t .

Nor did Meredith even have the courtesy to ask us if we’d like to complete our subscription term with issues of Eating Well.

There aren’t that many good cooking magazines out there, and we’ve lost one of the best.