I had a revelation the other day. I can bake healthy bread that I enjoy without using whole wheat flour, which I don’t like all that much.

As part of my bread baking routine I have always had a bag of whole wheat flour on hand. Not because I like it, but because it’s healthier than white flour and I felt that I “should” bake a whole wheat loaf periodically. The fact is, however, that I can and do make tasty, healthy bread without whole wheat flour. It’s all about using a some form of multi-grain blend.

King Arthur Flour has had a variety of multi-grain flours over the years, depending on what ingredients were available to them. Most recently I bought their Super 10 Blend, which I really liked. It makes for a marvelous sandwich bread when mixed with King Arthur unbleached bread flour. I was down to the end of my package of Super 10, so I added some whole wheat flour to a recent loaf. It was still good, but not as good as the Super 10 on its own. 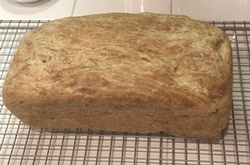 I will use up the whole wheat flour that I have on hand, but (by golly, I coulda had a V8!) from now on I will use the tastier multigrain blends for my healthy bread loaves.

Make It Scream, Make It Burn

I ordinarily would not consider reading a book with a title like this, but I read at least two highly approving reviews of the book, and an Amazon review said the title had very little to do with the content of the book. The reviews I read said that the writing in this book of essays was excellent, and I’m always looking for great writing. So I bought it.

In the first half of the book the author writes about a variety of topics. She tells us about a whale whose song is at a very different frequency than that of any other whale, and who captured the imagination of thousands of people. She writes about social conditions in war-torn Sri Lanka. She describes how the Second Life virtual reality environment can give meaning to the lives of those whose circumstances in the physical world are less than optimal. She goes into detail about how James Agee’s article for Fortune magazine about sharecroppers in Alabama, which was never published, is so very different from the book he did publish, Let Us Now Praise Famous Men.

And can this woman write? Yes, she can. Here is an example of her marvelous prose, in which she describes Las Vegas:

All of Vegas tries too hard. But is it inauthentic? I’ve never thought so. If inauthenticity depends on pretending you are something you’re not, then Vegas has always been adamantly honest. It is all fake, all the time.

The second half of the book is different. She writes about her own life. As an individual in recovery, about failed relationships, about becoming a stepmother and trying her best not to be an evil one, and about her own high-risk pregnancy.

The writing is vivid and direct. Jamison is an accomplished essayist.

I had seen positive reviews of this book, and it was in my collection of Kindle samples. It was about the time I was ready to start a new book when I read that it had won the 2019 National Book Award for fiction. I decided that it was time to read it.

The plot line involves a high school for the performing arts and the school’s students and faculty, along with a group of visiting British theater students and their teacher. Those visitors are critical to the plot. The relationships among the characters get complicated, which moves much of the plot forward.

The structure of the novel is interesting. The first half of the book reads like a straightforward novel told in the third person. The second half of the book takes place thirteen years later and is told from the perspective of one of the characters who, in the first half, plays a secondary role. Interestingly, Choi alternates between the first and third person in this section. There are also flashbacks that explain why the character has put a rather heinous plan into action.

The novel ends with a sort of epilogue that takes the story a number of years into the future. Loose ends do not get tied up, but I nevertheless did not feel cheated. The characters and the writing left me with the feeling that the novel had accomplished what it set out to do.

Today is the Feast of the Epiphany, bringing the Christmas season to a close. So we move on to yet another new year. I have shared this in years past, but the feeling clings to me once again this year. That feeling is that I am ambivalent about how we express Epiphany in our lives and in our world. I want to believe Howard Thurman (on the right), but Auden (on the left) seems to be much closer to what I personally experience. Perhaps I can accept Auden as the quotidian reality and see Thurman as the aspirational goal.

However you see it, happy Epiphany and all the best in this new year