Still Here is a comprehensive, deeply researched, exquisitely written book about the life of Elaine Stritch. The author takes us from Elaine’s birth (before it actually, describing in too much detail her parents’ wedding night) to Stritch’s final breath.

Stritch had a big ego that started in childhood and lasted throughout her life. She called attention to herself, constantly annoyed and frustrated the other actors with whom she worked, had trouble remembering her lines, frequently ad-libbed in scripted shows, and audiences loved her.

She was somewhat (somewhat?) neurotic, drank in order to be able to go on stage, had a series of not so healthy relationships, and made unreasonable demands upon her producers, many of which were agreed to. She didn’t marry until age forty-eight when she wed John Bay. Bay was an actor whose family ran the Bay English Muffin empire (used in the Egg McMuffin), but who had no access to the family wealth. Bay was gay, but Stritch stayed with him until his death. In fact, she was buried next to him.

Still Here is one of those titles that works superbly as an audiobook. Voice actor Andréa Burns does an exceptional job of reading Still Here. Her ability to perfectly channel the whiskey voice of the mature Elaine Stritch is absolutely delightful and makes the audio book a real pleasure to listen to.

everything new is old again 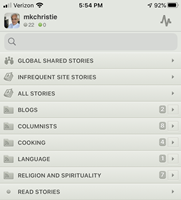 I like having one place to go to read all of the new posts for the blogs I follow along with daily updates from pages such as NPR Arts & Life. This was made easy a number of years ago with the advent of RSS, Really Simple Syndication. All you needed was a web site or app that supported the protocol. For a long time a lot of us used Google Reader, which was well suited for the task. But Google can be like a child with a short attention span who gets bored easily, and it dropped Google Reader a while back, sending lots of people scrambling. I have since been using a service called NewsBlur, which I can access from my web browser or by using their iOS app on my iPhone and iPad. It works well.

The problem is that RSS support has become spotty. Bosco Peters, an Anglican priest in New Zealand, has a wonderful blog called Liturgy. When Bosco redid his web site the RSS feed was lost, and his attempts to fix it were unsuccessful. My friend Tahoe Mom resurrected her blog at a new site and it has no RSS feed. Frustrating.

I suppose the predominance of social media has rendered RSS nearly obsolete. That’s unfortunate, because in these days and times I try to stay away from social media except for Instagram, and I especially work at keeping off Facebook except for my Episcopal Church of the Good Shepherd communication tasks.

To invert the words of that catchy Peter Allen song: Everything new is old again.

Lily King’s new novel Writers & Lovers is written in the first person. The protagonist and narrator Casey at age 31 is trying to finish her novel after six years of fits and starts, attempting to make a living as a waitress, and trying to pay off her past-due student loans.

Casey seems quite competent as a waitress at an upscale restaurant to which she commutes by bicycle from her living space, a garden shed turned cottage next to her landlord’s house, but her manager puts her on probation twice for reasons that don’t seem to be entirely fair. She becomes involved with a writer her own age and also with an established author, widowed with two young sons, sixteen years her senior. She has a past: her high school coach father retired in shame after some sleazy activity in the locker room and her mother ran off to Mexico with another man and later died there mysteriously.

The story takes place in the early 1990’s, with occasional passing references to the likes of Whitewater special counsel Ken Starr. Casey has an answering machine rather than voicemail and no one seems to have a cell phone. Nonetheless this is not a period piece by any means; it could just as easily be set in 2020.

The writing is lively and King keeps the story moving at a rapid clip. There is one incident towards the end of the book involving Casey’s brother and her landlord that seems to serve no purpose, and we never learn the circumstances of her mother’s death, but otherwise the story holds together well. The final scene is a bit quirky, but it does its job in offering a solid conclusion. The ending is not open-ended, leaving us adrift, as is the case with many novels.

I don’t know if Writers & Lovers qualifies as literary fiction, but it is certainly a highly readable novel.

We knew that we both had surgeries coming up: Terry with her knee replacement surgery in October 2018 and me with my gastrointestinal surgery that ultimately happened in February of last year. We added Hulu as a streaming service and bought a second Roku device for the bedroom. After my surgery and then my setback, which meant a second stay in the hospital, I added CuriosityStream.

As it turned out, neither of us watched a whole lot of streaming video during our respective recoveries. Star Trek: Discovery was a disappointment, as was the first episode of the much-anticipated Star Trek: Picard earlier this year. After some initial streaming of programs like The Mindy Project and WKRP, I rarely watched anything on Hulu, and in spite of its quality content I watched very little on CuriosityStream.

So this month we did the opposite of cord-cutting. We did some stream-narrowing. I cancelled Hulu and CBS All Access. I also cancelled CuriosityStream, but reinstated it when I got an offer for an absurdly low annual rate. That leaves us with Netflix and Amazon Prime Video along with some free services, including PBS and AllArts, which is pretty darn cool.

That will nearly cover the difference in our higher cable bill as our promotional period comes to an end.

Until the End of Time

Brian Greene is a working physicist who is also well-known for writing popular books on science. Until the End of Time is his latest. I read a couple of very positive reviews of this book when it first came out and was intrigued enough to purchase it.

Green covers a variety of topics, including entropy, evolution (both biological and non-biological), quantum physics, the big bang and the earliest days of the universe, and the ultimate fate of the universe, which scientists now generally see as continued expansion until there is nothing there.

Greene is an excellent writer when it comes to popularizing science; he is clear, concise, and witty. He certainly knows his stuff, and the work is well-annotated. There is a lot of interesting material here and I learned a few things that I didn’t know before. Ultimately, however, I was disappointed: I came away without any new insights about the search for meaning.

I have made falafel at home off and on at home for a number of years. I had always deep fried my falafel. That’s how you make falafel, of course. But we got an air fryer for Christmas and I shortly thereafter tried falafel in the air fryer. Turned out great. That’s good, because falafel ingredients are, after all, healthy. It’s just the cooking method that isn’t.

Now my falafel making had always been tied to my Vitamix ownership. The problem with that is when you put the garbanzo beans and seasonings into the Vitamix it works for a bit and then creates an air pocket and just spins, mixing nothing. Then there’s the problem of getting the mixture out from underneath the blades. Something of a pain.

So last week when I decided to try a new recipe, I used a totally different technique. I pulled out my KitcehnAid meat grinder attachment and ran the garbanzo beans through that into a stainless steel bowl. I threw in the seasonings, put on a pair of food handling gloves, mixed everything together, and formed the falafel balls. That worked!

Falafel lessons: air fry, don’t deep fry and use the KitchenAid grinder attachment along with that most valuable of kitchen tools, your own hands.

The Seine: The River That Made Paris
Elaine Sciolino
Narrated by the author
Audible Studios, October 29, 2019
$17.47 for Audible members, more for non-members
purchased with an Audible credit

The Seine: The River that Made Paris opens with the author describing how she arrived in Paris, recently divorced, as a correspondent for Newsweek, new to the city with a shaky grasp of the French language. Listening to this book one learns that she matured into a seasoned journalist, mastered French, and built a long-lasting marriage with two daughters.

These things, however, are incidental. The book is about the Seine, and the author describes the river and its history beautifully. She takes one from the river’s source in Burgundy to its mouth at La Havre in the English Channel. She goes back in time to the native inhabitants of Gaul before the arrival of the Romans and takes us up to the present day. Sciolino describes the Seine in books, movies, and song, even including a chapter on sex on the Seine. She shows us the lives of the barge owners, an occupation that no longer exists in the form it once did, and describes the booksellers in their stalls on the banks of the river, while offering a glimpse of what it takes to be in law enforcement on the Seine. She does not hide her love for Sequana, the goddess of the Seine.

There is much in this book that is timely. She writes about cruise companions who are fans of the current occupant of the White House. Sciolino also includes an Afterword describing the fire at Notre Dame Cathedral. The cathedral, after all, sits on an island in the Seine, and Seine water was instrumental in dousing the flames.

The book is ably read by the author. The slightly affected way in which she marks off quotes by others is a bit annoying, but overall The Seine is a delight to listen to.