When we lived in Gilroy we did a complete remodel of our kitchen. And remodel we did. The contractor completely gutted the kitchen and built a new one from scratch. The only thing that remained was the dishwasher. (Which we had to replace soon thereafter because the contractor didn’t anchor it when he reinstalled it.) We loved that kitchen and hated to leave it.

Here in Hemet we have done a sort of incremental kitchen remodel, but it was not something we planned. Not long after we got here in 2015 the thermostat in our refrigerator (that came with house which had been built nine years earlier) gave out and we replaced it with a Frigidaire as the part for the thermostat was no longer available.

Things were rather quiet for a few years, but in early 2019 the oven quite working. It simply refused to heat up. We called the repairman who returned to the shop and called us with an estimate that amounted to half of what a new stove would cost. Since I badly missed the convection oven we had in Gilroy we went shopping for a new stove. This was in February, before my surgery that month. We found a Samsung model we liked and ordered it. It finally arrived in April, after my surgery and after I had recovered from a setback that landed me in the hospital for a week in March. By then I was ready to get back to cooking. And back to baking bread again, with that new convection oven. I write about the new oven here.

Then, in May, we decided we had had it with the Frigidaire refrigerator. We were constantly fighting with the ice maker, and it had several other annoyances that made it frustrating to deal with. We bought a new Whirlpool with a larger capacity and a bottom drawer freezer. We’ve been quite happy with it, despite the occasional annoyances with the ice dispenser.

In May of this year our built-in microwave, which was also was the same age of the house, stopped working. We replaced it with a Frigidaire and have been quite happy with it. It lacks a couple of features that the old one had, but it’s much quieter and it does everything we need. 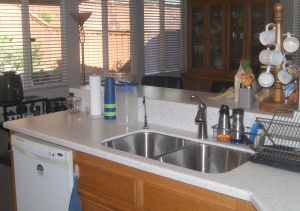 Then there was the case of our kitchen sink. It was porcelain and had begun chipping. We tried to repair it, but it simply looked ugly. And the faucet, which had a removable nozzle attached to a hose, had been leaking for some time. I called the contractor we used to install our artificial turf about getting a new sink and faucet. He suggested replacing the countertops as well. Neither of us were fond of the tiles that were in place. We also knew that we were going to be in a COVID-19 world for quite a while longer, and while we have always done a lot of cooking in normal times, current circumstances mean we are cooking as much as or more than ever. So it didn’t take long for us to decide that replacing the counters was a good idea. While we were at it I thought installing a reverse osmosis water filtration system would be a good idea. That meant that we could have nice, clear ice and free up the space in the refrigerator taken up by the Pur water filter. No more filling it up at the sink and lugging it back to the fridge. No more dropping it when it slipped out of my hands, as it once did.

So we ended up with entirely new countertops (of the acrylic solid surface variety), a new sink and faucet, a new garbage disposal, and a reverse osmosis water system. All of that took three days, as opposed to the three months that our Gilroy kitchen remodel took, with everyone who came into the house following COVID-19 protocols and wearing masks.

That’s pretty darn good, and we have nearly the kitchen we want. We are both quite happy.