I love Indian food, as you may know if you’ve been reading this blog for a while. Sadly, my options are limited these days. Our local Indian restaurant here in Hemet was short-lived, though Terry and I did all we could to support it. We could drive thirty minutes south to Temecula and go to an Indian restaurant there called Mantra, but their primary business is buffet, and such service is, as you well know, not currently allowed in California. (Besides, neither Terry nor I are comfortable with restaurant dining right now.) And then, to add insult to injury, some time back my favorite brand of frozen Indian lunches, Tandoor Oven, disappeared from the freezer cases of the two stores here that carried it.

So what’s left? Right. Fix it yourself. 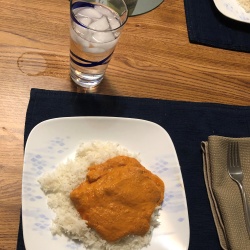 I have a lot of Indian dishes in my recipe database, and multiple versions of some, such as Chicken Tikka Masala and Butter Chicken (two recipes that are hard to distinguish from each other). Last week I decided I had gone too long without Indian food and planned Butter Chicken for Friday. I chose a version that recently appeared in Food Network Magazine.

I had previously browned the chicken with the indicated spices. I cooked the tomato mixture down, threw it in the Vitamix, and put it back in the Dutch oven. I put the chicken back in and let it simmer for a while. At the last minute I added heavy cream and butter.

Meanwhile, I had been cooking a cup of Basmati rice on another burner.

The result? I was happy. Terry was pleased. If you can’t go out for Indian food you can certainly make it at home. It is a lot of work, but the finished product is well worth it.