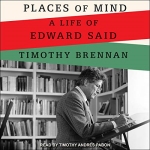 Edward Said (pronounced saī-eed) was a major figure in the intellectual life of the United States in the second half of the twentieth century. This book offers a comprehensive biography.

Said grew up in Cairo, although he was born in Jerusalem. His mother insisted on giving birth in Jerusalem because she lost a previous child at birth due to incompetent medical care in Cairo. Said’s father was an Arab who attained American citizenship, hence making Said a citizen at birth. His father was in the office equipment business and made a lot of money selling his merchandise to the occupying British government in Egypt.

Said’s parents sent him to school in the United States. He attended private institutions for his high school years, did his undergraduate work at Princeton, and received his doctorate from Harvard. He spent his entire teaching career at Columbia University, though he had regular sabbaticals and spent a lot of time abroad, particularly in the Middle East.

His life was in many ways bifurcated. He spent a good deal of time and energy supporting the Palestinian cause not only with his writing and speaking, but also being actively involved in organizations that supported the Palestinian people. At the same time his academic specialty was Western literature. He wrote his dissertation on Joseph Conrad, and he spent many years studying Jonathan Swift, never publishing the major work he had planned. His early work Beginnings discusses philosophy and intellectual pursuits, drawing on Western philosophy.

The work Said did both in his Palestinian efforts and in academia did not isolate him from popular culture. It seems he liked American network television and enjoyed programs like The Mary Tyler Moore Show. If a family member needed a new stereo he took the lead in making the trip to the electronics store.

Said learned the piano as a child and played it all his life. While early on music was not part of his public persona, later in life he let that part out once he received a cancer diagnosis. He formed a partnership with conductor Daniel Barenboim and they structured an organization to provide music education to Palestinian young people.

Author Timothy Brennan was one of Said’s students at Columbia, but he is straightforward about Said’s faults. Said often treated his family poorly, and his ego could be oversize. While sometimes encouraging students he could also be unnecessarily harsh.

Timothy Andrés Pabon capably reads the book, skillfully navigating the many foreign phrases and names, although sometimes his cadence and rhythm do not seem to match the structure of the sentence. And he slips up here and there. He absolutely clobbers the names of both violinist Yehudi Menuhin and composer Leoš Janáček. In retrospect, given some of the complex philosophical concepts that Brennan discusses along with all the details about Said and those he encountered, it may be that one is better off reading Places of Mind in paper or e-book format.