Reading an Anne Lamott book is like reading a book by an old friend. I have been reading her books for many years, and she was a regular guest on the late, lamented West Coast Live radio program in San Francisco.

She wrote this book before the change of administration in Washington, so perhaps there is a bit of a pall over it that wouldn’t have been there had she finished the book after January 20. Nonetheless, Lamott is not about negativity; she writes about hope and help.

If you’re familiar with Anne Lamott you know she is a recovering alcoholic, and she speaks honestly about addiction and recovery. She writes about how she has been helped, about she has helped others, and about how we can help each other. Lamott (who is less than a year younger than me) was married for the first time in 2019, and she worries her husband may discover that she’s not the person he thought he married. He seems to not be troubled by that.

Anne has a way of putting things in perspective, even when the world seems impossibly difficult:

The search for the holy grail has been called off. No grail to find, no code to break. All along, it turns out that there was only the imperfect love of a few trusted people and that in troubled times, like heat waves, epidemics, and blackouts, most people bring their best selves. No ultimate answers, only the blessings of friendship and service; silence and music, the beauty of the seasons and skies, creation, in art and life’s phases—birth, death, new life. Sigh.

Lamott tells us, “Maybe the poet was wrong when he said the center cannot hold. Maybe it can and does hold. Maybe the center paradoxically holds everything, like the gravity well in which our teeny galaxy is held.”

She writes, “Terrible losses befall those we love, and yet we are saved again and again by a cocoon of goodwill, evolution, and sweet milky tea. That is plenty of center for me.”

And for me too.

My former rector, Fr. Phil at St. John the Divine, Morgan Hill, tweeted this the other day:

I re-tweeted that. I’m always trying to figure stuff out. And sometimes things can’t be figured out. Science is important and critical and essential. We need science. But sometimes we simply need to make room for the mystery.

I first encountered Pot Shots by Ashleigh Brilliant in the fall of 1971 when I first began attending Pitzer College in Claremont. They were postcards and the drugstore in downtown Claremont carried them. May favorite is someone looking off at the horizon, and the caption says:

Who will take care of the world
when I’m gone?

They are all digitized now, and you can find them daily on gocomics.com. Right now they are offering Pot Shots from that 1971 year. I don’t remember this one from those days, but it is unsettling that this sentiment is as applicable today as it was in 1971.

Appropriate, I think, given Wednesday’s blog entry. And, of course, I love the seventies milieu.

I have written much about Emmaus, though I normally reserve my comments for Easter. However, as I’ve mentioned, I have been taking the online course Soelle in Summer focusing on the work of Dorothee Soelle and facilitated by the marvelous Jane Redmont. Jane posted a poem by Soelle on Emmaus, which I reproduce below. It triggered a strong response from me, as the Emmaus story usually does. Here are the comments I made on the post, slightly edited. 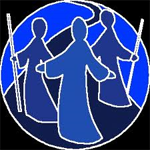 The Emmaus story touches and moves me at more levels and in more ways than any other passage in the Bible. I have blogged about it many times. I’m always disappointed that it shows up in the Lectionary for Sunday morning only once in the 3-year cycle (Year A – Matthew, which is odd). Yes, I know it’s there for Easter evening every year.

So I was struck by Soelle’s taking that passage and interweaving it with images of social justice denied, and then suggesting that Cleopas and companion (probably his wife) were walking away from the “city of their hope” to where, as we might say today, the grass is (or rather, seems) greener. Yet they turn back to Jerusalem, their “city of their hope” when the meet the Christ.

I need to come back to this poem and spend some more time with it.

Here is the poem:

Song on the road to emmaus

The folks over at Episcopal Café had an item called “Do you have to believe to belong?” last month. The article didn’t actually go in the direction I had expected, but it did set me thinking.

For me there’s a lot of church doctrine in which I don’t believe. Take, for example, the bulk of the Nicene creed, which we say every Sunday. Fortunately, I am part of the tradition of the Episcopal Church where doctrine is not crucial.

That tradition goes back, of course, to Queen Elizabeth I, who, while she had no reservations about telling people how to worship, was not interested in what people believed. Tradition holds that she said:

I would not open windows into men’s souls.

(I quoted the statement as it has been preserved. There was, of course, no concept of gender-inclusive language in her time.)

It is a practice that most of the Anglican Communion has continued to honor. That’s nice, because I love being able to receive Communion without feeling that I need to subscribe to a particular doctrine.

Yet another reason I love being an Episcopalian.

I’ve long been familiar with Coffee with Jesus, since a couple of my Episcopal Facebook friends tend to share it frequently. It’s only recently that I’ve clicked Like on the source for the comic strip, Radio Free Babylon. The reason I did so was because of this one, which hit a bit too close to home (which CWJ frequently does). I’ve written about the house two doors down, where the wife has created something of a boarding house to make the mortgage, since her husband (whom I have not seen in ages) is not providing income due to his substance abuse. The boarders are not exactly young professionals, or even college students. They are, my guess is, mostly involved in recovery programs of one kind or another, and I tend to turn up my nose and look the other way.

That’s not quite what Jesus would have done.

I’m taking an online course called Radical Hope in Hard Times. The course includes a number of modern writers and activists: Dietrich Bonhoeffer, Dorothee Soelle, Dorothy Day, William Stringfellow, Clarence Jordan, Martin Luther King, Jr., James Cone, Ada María Isasi-Díaz, and George Tinker. One of the course requirements is to post at least one comment a week on the private course blog. I joined during the second week and had to dive directly into Bonhoeffer. This is what I wrote, and I wanted to share my thoughts here as well.

When I signed up for this course I told Jane that I thought Bonhoeffer would the most difficult for me. What I did not say was that it was not that I would find him difficult to understand, but that, as in Star Wars: Episode III – Revenge of the Sith, we all know the outcome from the very start. The fact that his execution was so close to the end of the war and the liberation of the camps makes it all the more tragic.

In addition, I have a personal connection to the Holocaust. My first wife, who died suddenly in 1989, was Jewish, and her parents were survivors of the camps. The story I am told is that after the war her mother went from camp to camp until she found her husband, from whom she had been separated.

Reading Bonhoeffer, though, I was caught up by this passage in Letters and Papers from Prison, and kept re-reading it:

Who stands fast? Only the man whose final standard is not his reason, his principles, his conscience, his freedom, or his virtue, but who is ready to sacrifice all this when he is called to obedient and responsible action in faith and in exclusive allegiance to God— the responsible man who tries to make his whole life an answer to the question and call of God. Where are these responsible people?

Bonhoeffer was one of those. I can’t say that I’m anywhere near there.

Miroslav Volf quoted Flannery O’Connor on Facebook recently. Volf says that in response to a suggestion that the Incarnation may not be emotionally satisfying, O’Connor wrote:

I must say that the thought of everyone lolling about in an emotionally satisfying faith is repugnant to me.

Hmmm. OK… We want our faith to reassure us and make us feel good, but I have to admit that I believe O’Connor is right. If our faith is not challenging us to be better people and to help make the world a better place, then it is not doing what it is supposed to do.

A thought in this season of the Incarnation as we approach Epiphany.