we were there that long?

As we headed south Terry and I reflected on the fact that we had been in our house in Gilroy for eighteen years. What I realized was that was the longest I’d even been continuously in one place. We left the house I grew up in 1960 to spend three years in Barstow. We returned to that same house in the spring of 1963. When I headed off for my senior year of college in the fall of 1974, I never really returned. That’s eleven and a half years.

None of my stops between then and Gilroy even approached that. But we then ended up spending a full eighteen years in Gilroy, minus perhaps two weeks. That’s something.

But that’s also past. We’re here. We love our new house. We look to the present and we look ahead.

I had plenty to worry about with respect to our move, and I did my share of worrying. I think I inherited that trait from my Grandpa Monaghan, and it’s something I would do well to try to fix.

In any case, one of my biggest worries was about Tasha’s trip south. After staying in a motel in Gilroy after the movers left, the next morning we picked up Tasha at her resort. Of course we did not head home as she expected, but headed east on Highway 152 to Interstate 5, and then south on I-5. She did well. She was alert and looking around for a while, but as we got into the boring monotony of I-5 she settled down in the footwell and snoozed.

When we got to Tejon Ranch at the bottom of the Grapevine we gave her a tranquilizer that the vet had prescribed, and that meant that she slept comfortably along Interstate 210 through the greater Los Angeles area and into the Inland Empire, where we connected with I-10, before turning on to California 79 and on into Hemet.

We stopped a couple of miles from our new home because I needed to pull out the transponder to get into our gated community. Tasha thought that was her opportunity to get out of the car, but Terry persuaded her otherwise.

Shortly thereafter we were home. Tasha bounded into her new home and has been doing well ever since.

My maternal grandfather spent his entire working career in the wholesale nursery business. He was a partner in the Hemet Wholesale nursery business, and he was sales manager for the storied Howard Rose Company. I remember one wall of his office consisted entirely of a huge blown up photograph of a field of roses in bloom, illuminated by fluorescent lighting.

I remember well their acres of nursery stock and roses in cans off of San Jacinto Street between the towns of Hemet (where I grew up) and San Jacinto. What I don’t remember, and I can’t for the life of me figure out why, as I must have passed by there hundreds of times, is the Howard Rose property  to the west of town, just before you leave the San Jacinto Valley, where they grew roses.

Both companies are long gone, but my dad pointed out to me that Four Seasons, where Terry and I are settling in, is on land that was once that Howard Rose Company property. It’s never a great thing when agricultural land gives way to other uses, but I have to say that it gives me a certain delight to be living on land that was once an important part of my family’s history, and of the history of the town in which I grew up.

one side benefit of moving south

Posted: May 6, 2015 | Author: Mike Christie | Filed under: Heading in a new direction, Politics | Leave a comment

It occurred to me that there is at least one side benefit of our moving to Southern California. I doubt that our two Democrat votes will be missed in the greater Silicon Valley area. There are plenty of those here. But I think that adding two Democrat votes to the Riverside County electorate would be a good thing.

There is a Democrat Party Headquarters in downtown Hemet. I’m thinking of spending some time volunteering there as I begin networking and get acquainted with the community as it exists today.

As we move south I’m thinking about all the new services we are going to have to find.

A lot of research to do.

It hadn’t occurred to me until I sat down to write last Friday’s Secular Music Friday entry, my final one from the San Francisco Bay Area, that I have been here for thirty years. Thirty years? Unbelievable yet true.

I left my beloved Claremont in 1977 to become the store manager and open the new B. Dalton Bookseller in Laredo, Texas. After a year there I moved to Oklahoma City to manage two other B. Dalton stores. I stayed in Central Oklahoma until 1985 when Ruth and I decided to move, for a variety of reasons, to the Bay Area. Our first apartment in Redwood City looked out over the lights of the peninsula and the bay. I remember well the sign lighted in blue on a building, “Bat Area Bank.” We moved to San Jose a year later. I lost Ruth in 1989.

I lived in Los Gatos and then Mountain View. Terry and I got (back) together in 1991. Terry moved up with me to Mountain View in 1993 and we got married in 1994. We lived in Mountain View until 1997 when we bought our house here in Gilroy.

So we’re just a couple of weeks short of eighteen years here in Gilroy, and for me it’s been thirty years in Silicon Valley and the Bay Area.

Tomorrow the movers arrive and Wednesday we get in the car with Tasha and head south. It is a move I would rather not have had to have made, but all will be well and new adventures await.

that’s my song, once again

I’ve shared this before, but in the spirit of nostalgia, here, once again, is “That’s My Song” sung by the Smothers Brothers. 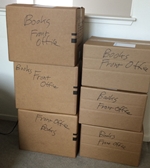 It’s amazing how much we’ve scaled back since we began this whole process in February. It began when we had to pack up and move furniture into the garage for staging. There was a lot of stuff that we realized we didn’t need that went to Salvation Army, Goodwill, and our local Hope Services. We made multiple runs to those places. Then there were two visits to the electronics recycling facility. The staging movers took Terry’s couch and love seat for a charity they work with. We had a scheduled pick-up from Salvation Army for multiple large items. And we had items to put out for Hope on each of their regular visits through the neighborhood every six weeks or so. We had an especially large set of items on their most recent visit.

Perhaps we cut back a tad too much. But in general scaling back is a good thing. It leaves room for the new in our new space.

The past few months have been an adventure on a number of levels. One of those levels is the differences in how real estate is done in the Bay Area vs. the Inland Empire.

In a nation we often think of as having become homogenous, regional differences do, in fact, exist.

As we prepare to move south I am thinking about all our “lasts” here in Gilroy, the Garlic Capital.

We’ll have lots of new and fun things to discover in Hemet and Four Seasons, but it’s appropriate also to look back.