keeping calm and carrying on

Those of you who have been on Facebook for a while will remember a time when the meme, “Keep Calm and Carry On” or some variation thereof appeared with annoying regularity. It was supposedly originally a message to the British people from their government in the run-up to World War II.

I have never been big on sharing memes on Facebook, but recently one caught my attention in such a way that I had to share. It read:

The less you give a damn the happier you will be.

It seems to have struck a chord, as it received multiple likes. That is worth noting in that many of my Facebook posts receive no likes at all.

Interestingly, that same evening there was a quote from venerable Ram Dass on Instagram which said the same thing in a different way:

The resistance to the unpleasant situation is the root of suffering.

My cousin Keith posted a saying from the Roman emperor and philosopher Marcus Aurelius, who reigned from the years 161 to 180 in the Common Era. Despite its antiquity it struck me as being particularly appropriate for those of us who are nauseated by the words and actions of the current administration in Washington. It reads:

You always own the option of having no opinion. There is never any need to get worked up or to trouble your soul about things you can’t control. These things are not asking to be judged by you. Leave them alone.

All different ways of saying the same thing. The final word goes to Dame Julian Of Norwich, who was born in 1342 and whom the Episcopal Church honors on May 8. A vision told her that whatever God does is done in love, and therefore:

In other words, keep calm and carry on.

AARP and the Summer of Love

When the latest issue of the AARP magazine arrived I did a double-take. I took a picture of the cover and posted it to Instagram. I wrote, “This is So Very Wrong. (Or maybe it’s just depressing…)” 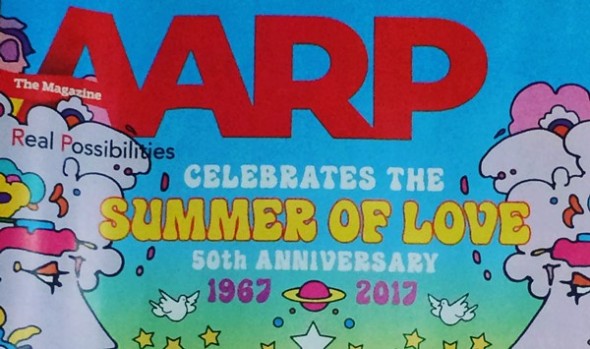 It really is hard to believe that “many years from now” has arrived.

I saw a mention recently that Star Wars celebrates its fortieth anniversary this year. How can that be?

It shouldn’t surprise me. Two years ago I missed attending the Pitzer College alumni weekend which included those of us celebrating our forty-year reunion as Terry and I were in the process of moving here to Hemet from Gilroy.

So yes, two years later would be the fortieth anniversary of Star Wars. I missed that event, 25 May 1977, and was only vaguely aware of it. I was in the process of moving then as well. I was leaving my beloved Claremont for the unknown world of Laredo, Texas where I was opening a new B. Dalton Bookseller store. Later that summer a new section of the mall opened up that included a multiplex. Star Wars was one of the movies showing when the theater opened. I lost count as to how many times I watched it.

I also received notice recently that the twenty-year life insurance policies that Terry and I took out when we bought our house in Gilroy are coming to term this summer. Has it really been twenty years? It has. It was 1997 when we said goodbye to our landlord, gleefully telling him that our new mortgage payment, PMI, and taxes combined were less than the rent he wanted to charge us under his proposed new lease.

It’s all hard to believe, but then our nephew Race, whom I knew as an infant when Terry and I first got (back) together, is now married and has his own son who will be two in November. My brother Brian’s adopted son, Eric, was an unhappy ten-year-old when Brian married his mother Bobbie. Eric turns forty on Friday and his daughter turns sixteen in September.

Issac Watts was indeed right when he wrote about time as “an ever-flowing stream.”

I’m not that old

I’m not that old. At least I don’t feel that old. I have to admit that I become eligible for Medicare next year. But still. And if I want to feel young, all I have to do is to do is have lunch at the Bistro here at Four Seasons or go to Sunday service at Good Shepherd Episcopal.

So I was a bit taken aback when I read a recent daily meditation in the Forward Day by Day devotional guide. The author wrote:

Think back to the first major global event you remember. For me, it was the 1986 explosion of the space shuttle Challenger.

She went on to write: “Others may recall the fall of the Berlin Wall. … Still others will remember the events of September 11, skyscrapers folding in upon themselves and planes being transformed into missiles.” 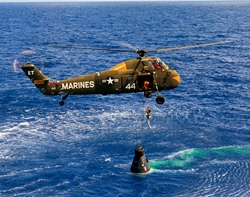 I was working at the weekly newspaper Metro in San Jose when the publisher’s wife said, “The shuttle blew up.” When the Berlin Wall fell I was working at a small software company in Mountain View. On 9/11 I was snoozing on the commuter train, not learning what had happened until I arrived at Lawrence Station in Sunnyvale.

The earliest events I remember were decades earlier. I remember talk of Khrushchev pounding his shoe on a podium and people discussing his statement, “We will bury you.” I remember the events surrounding the 1960 presidential election. I suppose the first specific even I remember was Alan Shepard’s sub-orbital flight in 1961. I was an avid follower of the space program then on.

But still, I don’t feel that old.

habits that stick with us

I was looking at my shopping list the other day and I thought about how habits we acquired long ago continue to stick with us. In particular, I noticed the cross-hatch on my z’s. I thought about where that habit came from.

It came from seventh grade math. Mrs. Proctor was the teacher. We were doing some basic algebra and so our problems included letters as well as numbers. She asked us to cross-hatch our letter z so as to clearly distinguish it from the number 2. I’ve been doing it ever since.

It’s interesting where we pick up these things.

There is a column each week in the Sunday New York Times Book Review called “By the Book.” Each week a different author is interviewed with a more or less standard set of questions. Here is an exchange from a recent interview with author Daniel Silva:

You’re organizing a literary dinner party. Which three writers, dead or alive, do you invite?

Gore Vidal and Norman Mailer, with William F. Buckley to serve as referee. I think I would set the table with paper plates and plastic utensils to avoid any undue bloodshed.

I posted this to Facebook and commented, “Can we somehow involve Dick Cavett in this as well?” After I wrote this I realized that Cavett had both Mailer and Vidal on his weeknight half hour PBS program in the mid and late 1970s. I don’t recall Buckley ever being on the show, but this was when Buckley was ascendant with his own weekend program in which he engaged in an intellectual smackdown with whomever his guest might be.

In fact, if I recall correctly, Cavett once had Mailer and Vidal together on the same episode, and there was something of a smackdown on that show.

There was some marvelous television in the 1970’s.